Exhibit A, 1990: Ken Hom’s The Taste of China, a handsome and pricey volume reflecting extensive travels in the People’s Republic during the 1980s reform era. The dominant note in this record of a return to the country that Hom’s parents left shortly before the Red Army victory in 1949 is a dignified, respectful filial piety. I loved and love his beautifully judged depiction of a China that — in the traumatized wake of the Cultural Revolution — still preserved a largely rural identity while starting to regain glimpses of an ancestral culinary heritage devastated by ideological thuggery.

Exhibit B, 2011: Feeding the Dragon, a spiffy trade paperback by the sister-and-brother writer/photographer team of Mary Kate Tate and Nate Tate. You couldn’t have imagined such a book in 1990: two college kids from Illinois mastering enough Mandarin, in both the U.S. and China, to fuel a harebrained project of backpacking anywhere from Macau to Inner Mongolia and parlaying their food findings into a cookbook, all in a few months. (It turned into much more than a few years.)

Ken Hom spent less time grabbing the spotlight or pursuing colourful escapades than patiently observing things that require unhurried thought to be even dimly understood. He was immeasurably aided by the renowned Hong Kong photographer Leong Ka Tai, whose images unfailingly seem to capture something more enduring and resonant than the instant of a shutter click.

The Tates’ China, by contrast, is a dizzily racing target that they just manage to keep up with in daredevil first-person, present-tense sprints — living every wild moment of the experience to the full while watching themselves do it with “Look, Ma, no hands!” glee. It’s a land where ancestral heritages compete with Mao Zedong collectibles, neon glare, born-yesterday skylines, punk rockers, Miami Heat fans and Westerners scarfing hot dogs and champagne in glitzy re-creations of 1930s Shanghai night clubs.

Mindless antics? Certainly not. Today the world’s kitchens don’t stand still for portraitists. Contemporary food writers addressing ancient or new cuisines need to pursue moving targets at warp speed, or at least, something competitive with blog speed. And the Tates rise to the occasion. 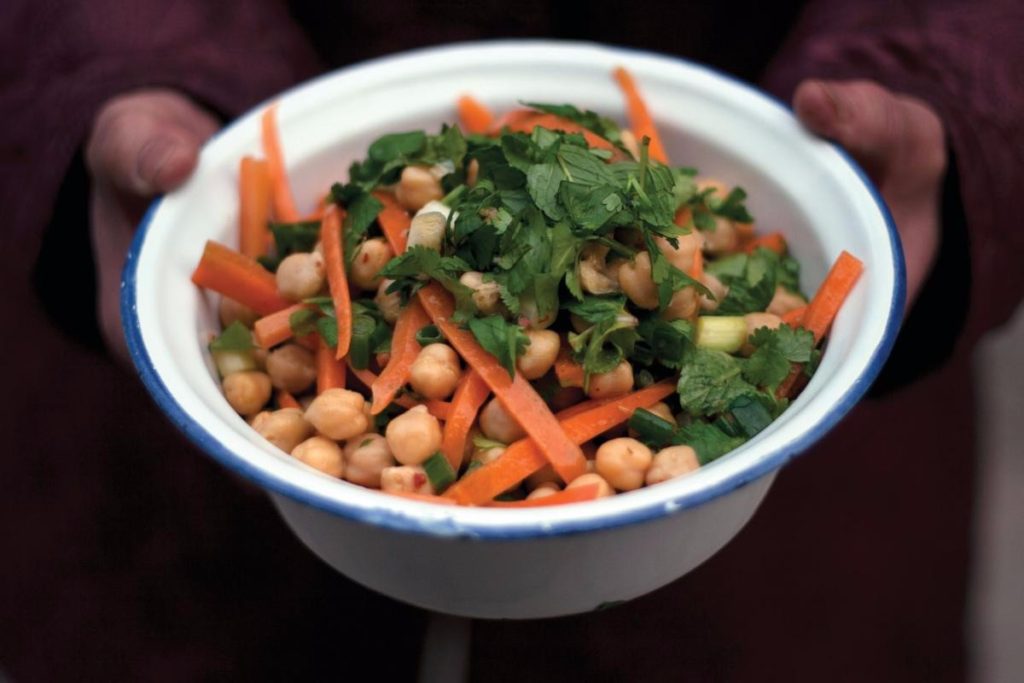 These cookbook novices have made smart decisions — first of all, focussing on a somewhat offbeat handful of modern China’s 33 provinces and administrative divisions. The expectable Guangdong, Zhejiang and Shandong are almost completely ignored. Instead, we accompany the loopy, cash-strapped, and frequently squabbling siblings by train, bus, bicycle and shank’s mare through places like Tibet and Xinjiang in the far west; Yunnan in the far southwest; and the recently annexed Hong Kong and Macau in the south. All were unknown on usual lists of China’s great cooking traditions a generation ago, while Fujian was only a slightly larger blip on supposedly definitive radar screens. Sichuan, Shanghai and Beijing are more orthodox choices, but even here the Tates aren’t obsessively interested in delineating classic regional cuisines. After all, what can “classic” and “regional” mean amid drastic relocations of the work force — including many minority peoples — from one end of China to the other?

For me, the explorations of Macau, Yunnan and Xinjiang are a major strength, since it’s hard to find coverage of these places in English-language cookbooks. (Some exceptions: Naomi Duguid and Jeffrey Alford got to Yunnan, Xinjiang, and many other surprising places in the 2008 Beyond the Great Wall, and Hom’s Taste of China has fascinating material on Yunnan.) Another good move was to play down many things you might expect a cookbook to focus on, including painstaking instruction in basic techniques or flavuor principles There is a succinct section covering some basics, but Feeding the Dragon just isn’t the kind of book you go to for lessons in slicing ginger or a repertoire of dishes formally organized by menu-category or main ingredient. Its nine place-centered chapters present a motley array of recipes interspersed with equally miscellaneous photo-essays narrated by either Nate or Mary Kate.

The book’s meandering informality works well. Nobody is terribly hung up on the minutiae of recipe-writing; and if this occasionally means that the oven gets preheated three hours before something goes into it or the nature of a “vegetable broth” for noodle soup is left to the imagination, the language flows more naturally than it would in formulas bristling with persnickety detail. The Tates’ unpredictable selection of dishes also strikes me as a plus. Sichuan, for instance, is represented by such canonical choices as eggplant in garlic sauce and dan-dan noodles — but also by “Strawberry-Chile Cocktail” (the authors have a penchant for sweet drinks) and “Green Tea Shortbread Cookies.” Nothing could better make the point that eclectic borrowings and experiments are going on with equal vigor in today’s East and West.

I have to confess discomfort with one aspect of the recipes: the Tates’ decisions on the always-vexed question of bona fide approaches versus substitutes and compromises. Pot stickers cooked in a nonstick pot, frozen puff paste replacing some vaguely described Uighur pastry dough — well, okay (I guess). It bothers me much more to see rice cooked without scrupulous prior rinsing, or fillets trumping whole fish in the fish recipes. I’ve been told, though, that exertions like rinsing rice or cleaning whole fish are scorned today by many younger Chinese cooks in the homeland and abroad.

In any case, the half-dozen recipes I tried — from an idiot-proof Macanese tomato and onion salad to chicken wings marinated in a lemongrass-accented mixture — were good enough to promise much future happy cooking.  Sichuanese ma po tofu, with a gorgeous blast of Sichuan peppercorns, was among the soupier, less oily and more satisfying versions I’ve had of this highly flexible dish. I also loved the slightly tart Xinjiang-style chickpea salad, carrying the haunting note of cumin favored by Chinese Muslims, and marvellously spiced Tibetan potatoes cooked in (clarified) butter. My favorite, however, was Macanese pork stewed in a heavenly sweet-and-sour tamarind sauce laced with funky, smelly shrimp paste.

Looking again at this fast-paced performance next to its 22-year-old predecessor, I’m not unreservedly happy to think of leisurely, spacious culinary overviews by people like Hom and Leong (firmly grounded observers with long attention spans) disappearing to make room for kinetic vignettes in the style of the Tates. But the young siblings sure have their finger on the pulse of a national (and transnational) Zeitgeist that can only pick up speed.

The Ploughman’s Lunch and the Miser’s Feast
Cairo Kitchen
Tacos: Recipes and Provocations