As soon as our flight to Spain was booked, I began searching for cooking classes in the cities we were planning to visit. My husband Read and I always try to include some sort of culinary adventure whenever we travel abroad. In Spain, I anticipated something similar to past experiences. We’d gather in a cooking school or restaurant kitchen, meet our chef/instructor and visit the local market where our guide would answer questions while we shopped for ingredients needed in our class. A formal lesson at the cooking venue would follow then we’d sit down to enjoy the food we had prepared. Throughout the day our teacher would be sharing information about local food, culture and history and we would come away from the experience with priceless knowledge, new friends and wonderful memories.

On this trip, we were meandering around Andalusia with our friends Lloyd and Sherry, stopping for several days each in Granada, Cordoba, Sevilla, Ronda and Malaga. We researched the culinary traditions of this southernmost region of Spain, anticipating the flavours of voluptuous, fragrant olive oils and juicy ripe tomatoes, the heady aroma of orange trees and the sweetness of their fruit, the abundance of fabulous fresh and often unfamiliar seafood, the chewy tang of thinly sliced Iberian ham slivered atop bowls of refreshing Andalusian gazpacho and the exotic and interesting spices and fresh produce found in local markets.

Email inquiries were made to many cooking schools in the region but nothing seemed just right. As our departure date drew near and we still hadn’t found our class, we asked Christine Cook, whose house we were renting in Granada, if she could help us. Her suggestion caught us by surprise: would we be interested in having her friend Manoli Soto Contreras teach us how to make paella (pronounced “pie-ay-ya”) in our own kitchen in the Albaicin, the historical old section of Granada that rises upon the hillside opposite the Alhambra Palace? We’d have to do our own shopping for ingredients without the watchful guidance of a teacher. Later in the afternoon, Manoli would help us prepare, assemble and cook our Paella. A novel idea and we jumped at the chance!

I have run a cooking school and taught classes for many years and have participated in classes in many different venues. From start to finish, Paella Day was unique. We were all looking forward to seeing how paella is made in the country where it was created. Manoli (emphasis on the first syllable) didn’t work from a recipe as such, so we really had to pay attention.

Christine, acting as the go-between, met us in the square near her home on the morning of our class. She handed us the grocery list (thankfully in Spanish and English) and pointed us in the direction of the tiny local market.

No one in the shops or market stalls spoke much English. In the mini supermarket, we pointed at the pork ribs, gestured that we wanted only two. We got a strange look until we mentioned costillas partidas para paella. The butcher nodded knowingly and quickly hacked the ribs into chunks, wrapped them in paper and handed them to us. Same thing for the half chicken — medio pollo partido — chopped, wrapped and off we went to find fish.

By now we knew to say para paella (“for paella”) first. The fishmonger helped us choose squid, mussels , clams and shrimp and happily posed for photos. At the vegetable stalls we pointed, waved our hands and repeated the word paella. Before long we had all of the meat, fish, chicken, vegetables, grocery items and of course wine we needed for our meal. We headed back to the kitchen to await Manoli’s arrival.

She arrived promptly at 5, a dark haired whirlwind with flashing eyes, a big voice and a dazzling smile. We knew at once that this would be a fun evening.

Did I mention that Manoli speaks no English? Read and I quickly found that our single semester of Spanish classes hadn’t prepared us for this kind of immersion. Even Lloyd and Sherry, whose Spanish is much better than ours, were challenged by Manoli’s enthusiastic and rapid-fire way of speaking. Fortunately, in this case, actions really did speak louder (and clearer) than words. As we watched Manoli, helped in the preparation, scribbled hasty notes, asked questions in broken Spanish with much hand gesturing and laughter, understanding was achieved. We cleaned the seafood, made fish stock, chopped vegetables, added spices and rice and helped assemble this home-cooked Spanish classic. How much rice per person? It looked like Manoli used a handful per person – 1/3 to ½ cup? Measuring cups were not in her repertoire. Paella is made differently in every Spanish kitchen and we learned all we needed to know to attempt Manoli’s paella when we got home.

In Spain, paella is often cooked alfresco over an open fire. Many homes have outdoor gas burners designed to hold paella pans. If you have a very large cast iron skillet or paella pan, you

can prepare and cook the paella in the same pan. Be sure that your grill is sturdy if your pan is cast iron. Outdoor cooking isn’t essential and paella can be cooked on the stovetop or in the oven if you prefer.

Saffron, an essential flavour in paella, consists of the orange stigmas of a tiny purple crocus plant that grows around the Mediterranean. It is the most expensive spice in the world for good reason. It must be harvested by hand and each crocus contains only 3 stigmas. When you realize that it takes about 14,000 stigmas to produce 1 ounce of saffron, you begin to understand the cost and the reason alternate flavourings and colours are sometimes used. Saffron can be purchased as threads or already ground. Best to purchase threads (once saffron is ground, it begins to lose flavor) nd grind them just before using. Store this treasure in an airtight container in a cool dark cupboard. In Spanish home kitchens, saffron is often replaced by a less expensive paella spice combination which can be purchased in Spanish supermarkets and spice shops. Sometimes yellow food colouring is used as well to get the desirable deep yellow colour.

As our paella bubbled on the stove, we sipped Rioja, nibbled a few simple tapas (manchego cheese cubes, marinated roasted red peppers, thinly sliced Iberian ham and of course, the ever present and wonderful olives) and set the table for dinner on the terrace, gazing upon our million dollar view of the Alhambra. While the paella cooked, Manoli monitored the liquid, adding more stock or water when the mixture looked a bit dry before the rice was tender. When the paella was ready, she added the finishing touches and garnishes, posed for photos with her proud students, tidied the kitchen then hurried home to make supper for her husband. 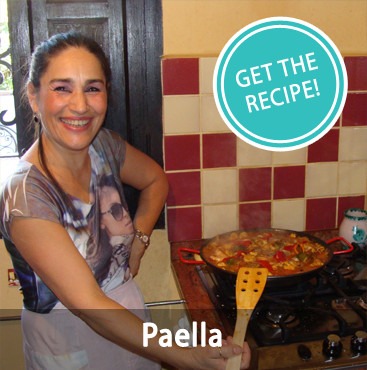 This hadn’t been a traditional cooking class but we were treated to a taste of Spanish home cooking and a glimpse of everyday life in Andalusia that most tourists neither seek out nor experience. As we sat down to enjoy our Spanish feast, the evening was warm and flower-scented, the company exceptional, the Rioja smooth and our paella perfectly delicious.

Manoli’s special touches have now been incorporated into my own paella, but I must confess I haven’t yet decided to toss out my measuring cups. The recipe that follows is a combination of what we prepared in Granada and the paella I have made for many years in my own cooking classes. It’s a user-friendly and memorable meal that can be changed to suit your guests, and whether or not you choose to measure rice by the handful or the cup is up to you!

Pam Collacott and her friends stayed at La Casa Grenadine, is a unique budget accommodation located in the Unesco Site of the Albayzin.www.casagrenadine.com

Now this, friends, is a #sandwhich. The Gravlax fr

The 2 small plates for $25 lunchtime deal at Play

A new culinary trail winds through the spectacular

Our Fall issue is out, with a review and recipes f

Fish, chips and a brew at St Arnould Microbrewery

Coming soon! Our Fall issue is out next week.#tast

An institution in Leavenworth WA since 1979. #cent