Australia and New Zealand both lay claim to inventing the sweet masterpiece called Pavlova. That debate will probably never be resolved but as Kiwi chef and author Genevieve Knights explains, what really matters is a perfect meringue.

Anna Pavlova (1885–1931) was an internationally renowned Russian ballerina who travelled the world performing for fascinated audiences in what must have been, for many, their first glimpse of top-class ballet. Some of her dancing can even be viewed online at YouTube in old black-and-white film without sound. It strikes me as a very different form of ballet to that we know today as she never turned out her hands and feet. However, while she was not considered a great beauty, it is said that when she began to dance you simply could not pull your eyes away from her magnetic performance.

A visit to New Zealand in 1926 made a very large impact on those who saw Pavlova dance and much was done in order to impress her. It was known that she was fond of meringues, and according to one tale a Wellington chef may have created the first pavlova cake in her honour and served it to her in the year of her tour. Sadly, there is no way to verify this story. Nevertheless, The Pavlova Story by anthropologist Helen Leach published by Otago University Press in 2008 sheds new light on the history of New Zealand’s national dessert and how it came to be named.

It was fashionable around this time to develop cakes and desserts and name them in someone’s honour – ’Peach Melba,’ named after Australian operatic soprano Dame Nellie Melba (1861–1931) is one that often springs to mind. The earliest recorded recipe for a meringue sweet to be called ‘Pavlova’ was published in New Zealand in 1928. Created by Dunedin home cook Rose H. Rutherford and published by Christchurch’s Weekly Press under the name ‘Pavlova Cakes,’ these were small, piped, coffee essence and walnut meringues. Apart from the coffee meringues, another dish named after the acclaimed ballerina was a four-layer moulded jello, but it was the cake that held on to the name.

Under the pseudonym ‘Festival,’ a recipe for the first ‘Pavlova Cake’ as we know it today was published in the N.Z Dairy Exporter Annual in 1929 in a brief description of two short sentences. As was typical of the time, recipes by home cooks assumed a certain amount of cooking knowledge on the part of the reader. It was made up of sugar, eggwhites and cornflour, with no vinegar, separated into two and baked in sandwich tins. A single-layer cake also going under the name ‘Pavlova Cake’ appeared in the Rangiora Mother’s Union Cookery Book of Tried and Tested Recipes in 1933, courtesy of local woman Laurina Stevens. This two egg white ‘pav’ was also baked in a sandwich tin, and once again with cornflour but no vinegar.

A pavlova made with vinegar appeared in 1934 in the newly launched New Zealand Woman’s Weekly, when a reader wrote in asking for a reliable pavlova recipe. Another reader responded under the name of “Successful Pavlova-Maker” with a recipe containing four egg whites, one breakfast cup of sugar and one teaspoon of vinegar to be cooked in a round cake tin. Whereas both Rutherford’s and ‘Festival’s’ recipes called for a very slow oven, cooking instructions around this time first began to advise placing the pav in a hot oven then turning down the heat. 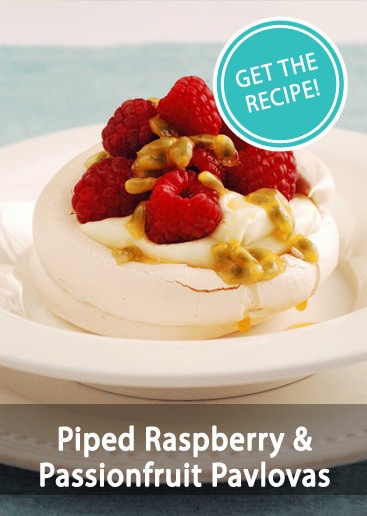 What is clear is that recipes for the meringue cake began to circulate in New Zealand in the late 1920s. In 1929 the name started changing from meringue cake to pavlova and was printed as such in a number of publications by 1934. Also in 1934, a recipe which appeared in the Wellington YMCA fundraising Blue Triangle Cookery Book called for the pavlova cake to be baked directly on top of greased paper instead of in a sandwich tin. All the cakes mentioned garnishing with whipped cream and other toppings like nuts and fruit.

Meanwhile, on the other side of the Tasman, Bert Sasche was credited with inventing the Australian pavlova cake in 1935, although there is currently no record of a pavlova recipe published in Australia prior to 1940. The pavlova roll, on the other hand, did indeed emerge from Australia in the 1970s and was later adopted by New Zealand around 1980. (Although, for the life of me, I still cannot fathom why this recipe was spread thin, baked and then rolled up when it cooks beautifully into the shape of a pavlova cake and in a fraction of the time – of course, it lacks the crisp exterior, but to me that just opens it up to all new possibilities.)

Meringue cakes, however, were by no means exclusive to Australia and New Zealand. Variations were circulated in newspapers and magazines around the western world in the 1920s and even a little earlier. They were close relatives of crisp meringue layered tortes of the kind made in Europe for centuries and some even had vinegar in the ingredients. So, given that most new recipes are modified from existing ones, instead of speculating endlessly about who first invented the pavlova, the more relevant question might be: When did the name change from meringue cake to pavlova?

Pavlova might now be considered an “old-fashioned” dessert, but perhaps it is we that have let the recipe down. When did we stop trying to come up with new variations and why? Maybe it is time to breathe some life back into this long-adored recipe inseparable from Kiwi childhoods growing up as barefoot, freckled, beach-loving kids.

Genevieve Knights is the author of Pavlova, a nifty cookbook devoted to Australasia’s iconic dessert. 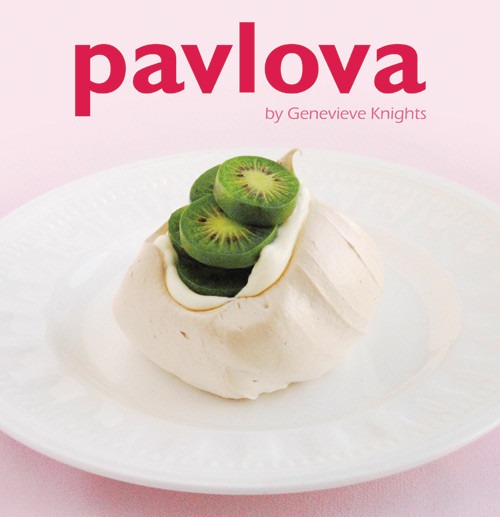