Even though it is just half an hour by road from the modern city of Da Nang on Vietnam’s eastern coast, Hoi An moves at a different pace. Once upon a time the most important trading hub in Southeast Asia, the riverside town had become a neglected backwater until UNESCO recognized its historic significance in 1999. Now Hoi An’s narrow lanes, atmospheric buildings and romantic waterfront setting are the basis of a different economy – tourism. 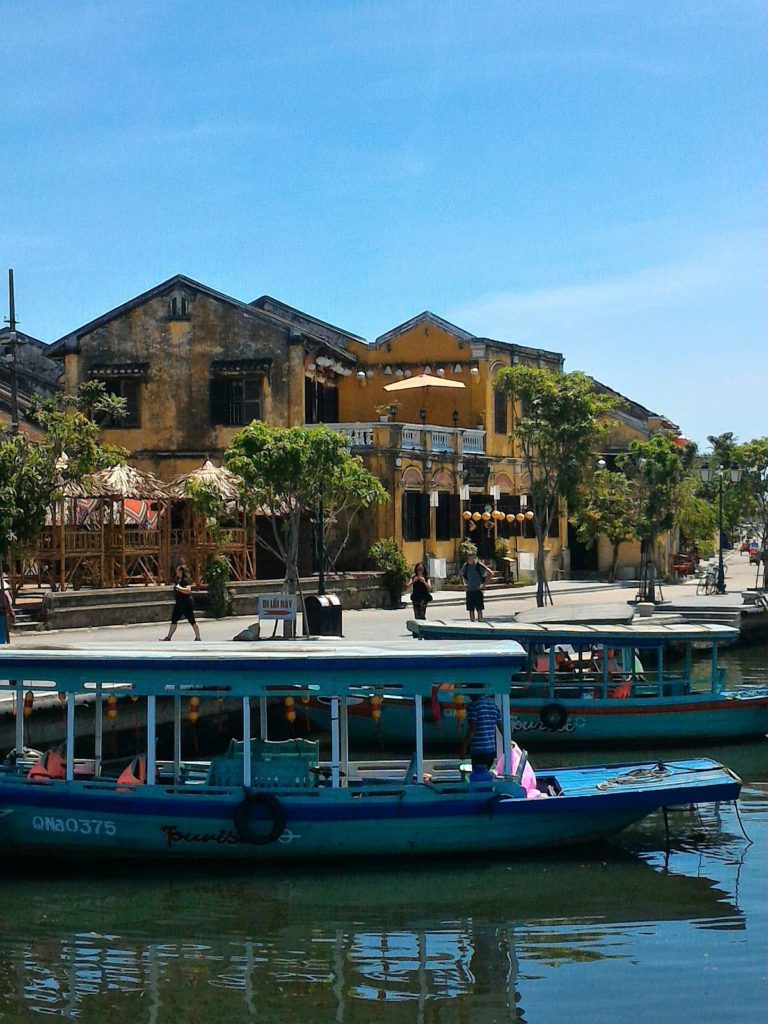 Portuguese traders visited Hoi An in the early sixteenth century, the first Europeans to set foot in Vietnam. The bustling port at the mouth of the Thu Bon River had been hosting merchants from China, Japan, India and Arabia, and other fortune seekers for more than 2,000 years. Hoi An, or Fai Fo as the Portuguese called it, was a prosperous, open-minded society where people of many different cultural backgrounds mingled.

The establishment of a French concession at Da Nang and the fall of the outward-looking Nguyen Dynasty at the end of the 18th century spelled the end of Hoi An’s golden era. Traders followed the money, deserting Hoi An for ports further north, leaving the river to silt up and the town to fall into slumber. While the rest of Vietnam embraced Western trends of modernization, Hoi An remained a traditional Vietnamese community, continuing its ancient ways with little interference from outside until UNESCO recognition open the doors to tourism.

Hoi An’s cosmopolitan past resulted in an exotic combination of Chinese, Japanese and European architectural and cultural influences. Most of the Old Town’s historic shophouses and godowns have been repurposed as restaurants, coffee shops, boutiques and lodgings, but a few remain family dwellings or places of business with lineages going back hundreds of years. Incense-filled Chinese temples and Japanese timber-frame houses sit side by side with Parisian-style cafés, shops with antique Portuguese signboards, art galleries, tailor and leatherworkers’ storefronts, and boutiques selling Vietnamese lacquerware, clever cut-paper designs and silk lanterns. 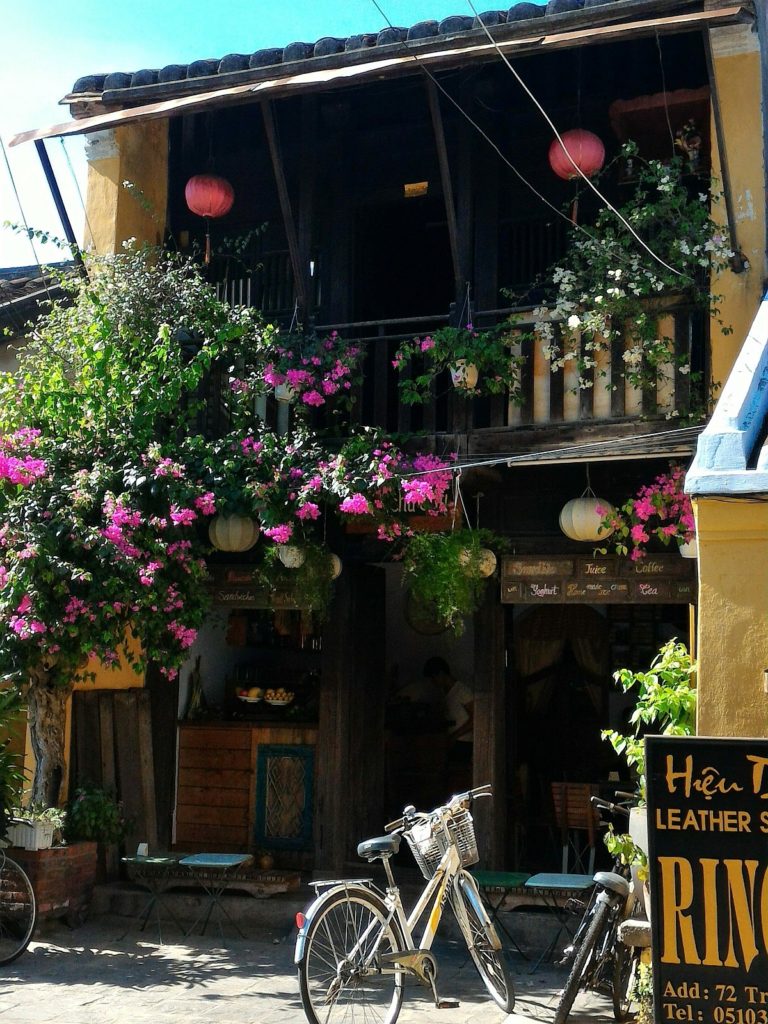 Motorized transport is banned in the cobbled streets of Hoi An. Bicycles are a popular way to get around but I like to wander and the district is compact enough to explore on foot. After getting measured for a pair of silk lounge pants and banana-print shirt that will turn heads at my next luau, I focused my attention on the places marked on my walking map by the concierge at my hotel (after his cousin’s tailoring shop). These were not museums or historic sites but the best places to taste Hoi An’s signature street foods — Cao Lau, Bánh Mi and Bánh Xèo.

Water from a thousand-year-old well is the key to Cao Lau, a rice noodle dish that is unique to Hoi An. According to legend, Ba Le Well water, plus ash from a tree grown on the Cham Islands (eight kilometers off the coast of Hoi An), provide the alkalinity that gives the rice noodles their distinctive springy texture. They are served in a five-spice-scented broth, garnished with smoky, charcoal-grilled pork, fresh bean sprouts, herbs and local greens, deep-fried croutons and wedges of lime. You’ll see Cao Lau on menus all over Hoi An. I’m no expert but the version I had in the leafy courtyard garden of a centuries-old shophouse, now home to a restaurant called Bazar, was delicious.

Ba Le Well itself turned out to be an underwhelming hole-in-the-ground in a weed-filled vacant lot but if I hadn’t gone looking for the mystical water source I’d have missed its excellent namesake restaurant. Ba Le Well (the eatery) is a no-frills place tucked away down a twisting alley. It was empty when I stumbled upon it mid-afternoon but I returned in the evening to find the spare, back-alley space transformed into a busy streetside kitchen with a fairy-lit garden filled with Vietnamese families tucking into huge platters of food.

Ba Le Well is famous for a do-it-yourself meal of rice rolls and there’s a strict protocol for their construction. A grandmotherly server demonstrated, supervising my efforts until satisfied that I could be left alone. This is how it goes: Take two triangles of rice paper and arrange them like the wings of a butterfly. Top with shredded pickles, cucumber spears, lettuce and fresh herbs; lay an omelette down, followed by a crispy little spring roll and a piece of charcoal-grilled pork. Roll the whole shebang up, dip it in nuoc cham, and cram it in your mouth before it disintegrates. Rinse and repeat until the heaping plates of food in front of you are demolished. The cost of this very generous meal, plus an evening’s worth of beer – about US$3.50.

Bánh Mi may just be the world’s greatest fusion sandwich

Bánh Mi may just be the world’s greatest fusion sandwich and it’s a hot topic in Hoi An. Since Anthony Bourdain raved about the Bánh Mi at Phuong Bread this sandwich shop on the edge of Old Town is packed. If you can snag a seat on the airy upper floor, it is a fine place to sink your teeth into the signature sarnie and kick back with a couple of local Larue beers. But locals will tell you that the best Bánh Mi are made by streetside vendors. If you’re intent on seeking out the best of the best, you’ll need to be up early to track down one of the more popular carts before they sell out, usually by mid-morning.

I visited Hoi An in September, the sweltering final month before the rainy season. With temperatures in the forties, sightseeing on foot demanded commitment and frequent hydration. I developed an addiction to fresh coconut water and iced Vietnamese coffee, which comes either black (super strong and bitter) or white (delicious but overly sweet). My solution after trial and error – order both and drink simultaneously. 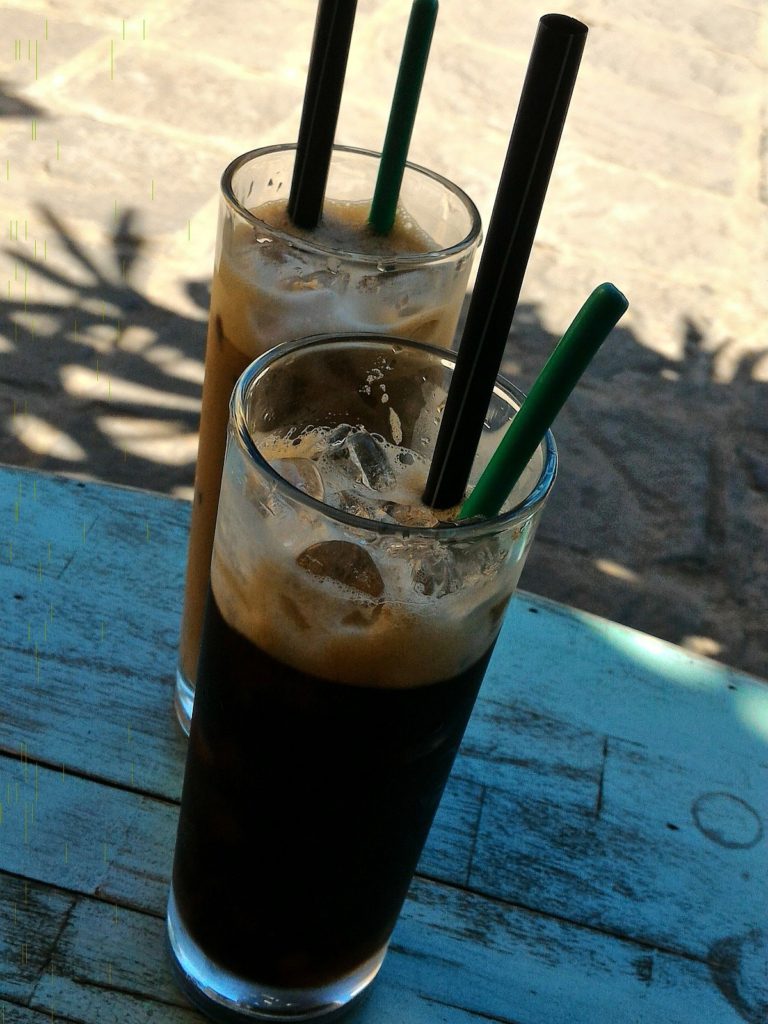 There’s nothing touristy about the central market in Hoi An, where ladies in conical hats sell fruit, vegetables, spices and all manner of household goods in a long covered market hall. In the surrounding streets simple sidewalk eateries cater to local residents. I joined a group sitting on low plastic stools where a woman was making Bánh Xèo – riceflour crêpes. She nodded as I sat down then continued juggling little iron pans over an open flame. She slicked each pan with oil and dropped in a few shrimp, letting them sizzle until they turned pink, then swirled in a thin layer of coconut/riceflour batter, adding a handful of spring onions and beansprouts before covering the pan with a little domed lid like a hat. When the crêpes were done, she rolled them up in ricepaper with some lettuce and fresh herbs and set them down before us on plate. Bottles of nuoc cham and chili sauce for seasoning were passed down the line as we ate. 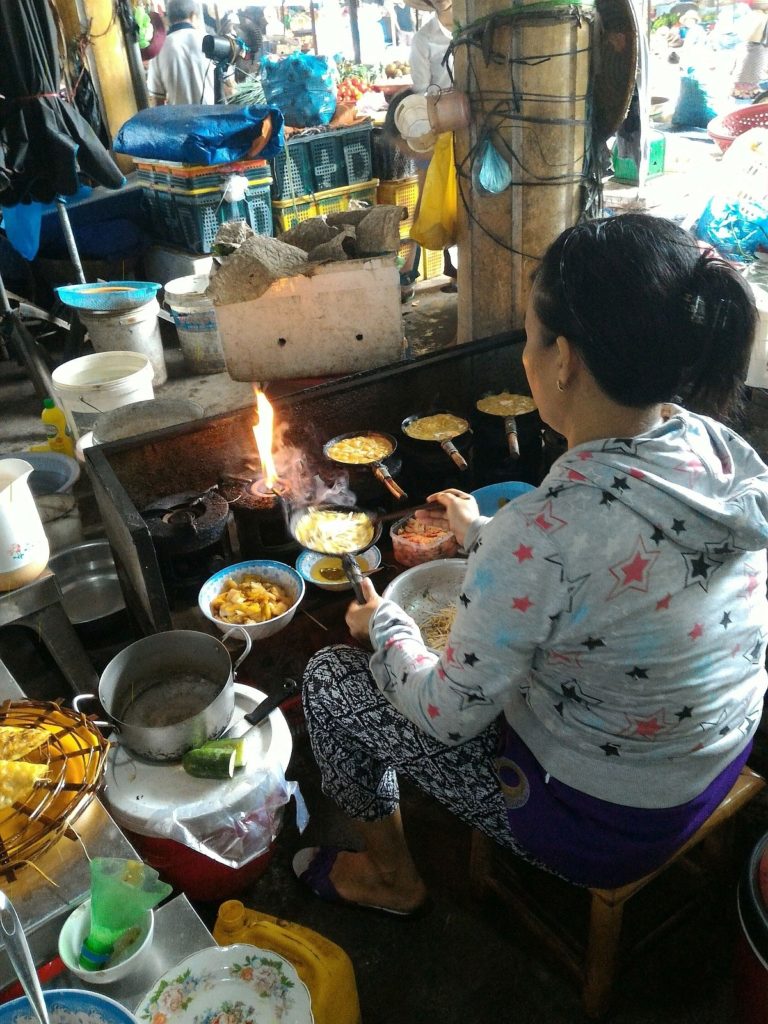 Hoi An is at its most appealing at night when the streets are lit with lanterns, the air is balmy and food carts set up shop along the riverfront promenade among the mustard-coloured merchant’s houses and godowns, issuing clouds of smoke and savoury aromas. Tourists and locals mingle, eating, drinking, strolling, enjoying the evening. If you can, time your visit for the full moon, when the whole town turns out to celebrate the Lantern Festival with music, dance, street bazaars and a flotilla of candle-lit lanterns drifting down the river.

For a final taste of Hoi An, I headed to the beach

For a final taste of Hoi An, I headed to the beach. Twenty-five (hot) minutes on a bicycle, or ten cooler ones by taxi, will take you along a road fringed by rice paddies to An Bang Beach and a row of seafood shacks overlooking the surf. You can rent a towel and a beach chair if you want to swim, or you can just hang out and enjoy the spectacular view over a long and lazy lunch of superbly fresh seafood. Fish, shrimp, clams, calamari, crab, you name it, simply prepared over aromatic charcoal, and made magical with coconut, chilies, lime, fresh herbs and nuoc cham – the essential tastes of Hoi An.