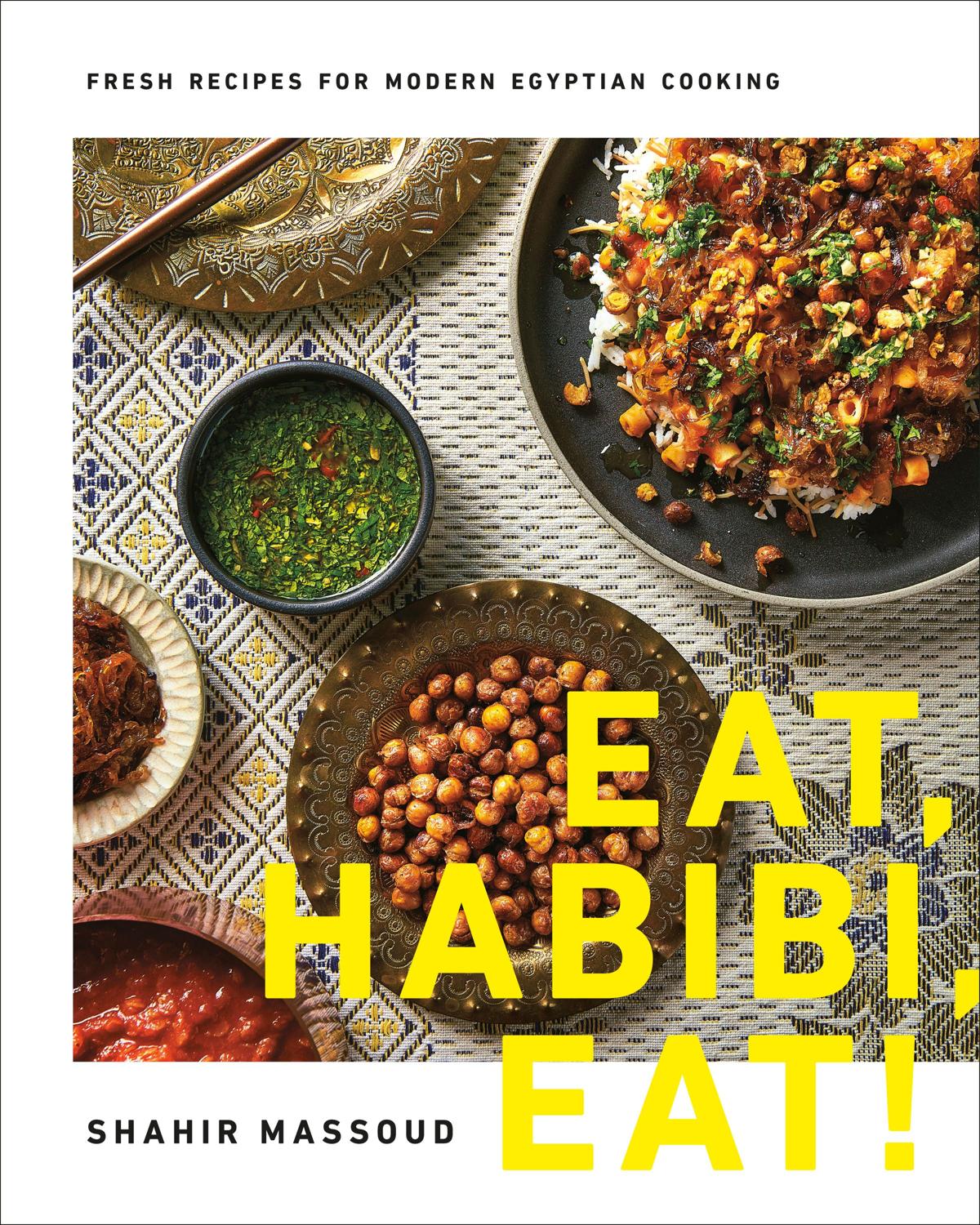 eafing through the pages of this new cookbook from Shahir Massoud reminded me of how much I enjoyed travelling in Egypt. Once you leave the sophistication of cosmopolitan cities like Cairo, daily life becomes rustic, seasonal and traditional. From the deck of a paddle ship on the Nile, I watched the river banks slide by, with scenes of farmers tilling the land and the smoke of cooking fires drifting into the sky, witness to the story of Egyptian cuisine, unchanged for thousands of years.

Massoud is a chef and television talk show cohost — very much a part of the contemporary culinary scene but in Eat, Habibi, Eat! he pays tribute

to his Egyptian roots and the parents who made his life in Canada possible. Like many immigrant parents who have struggled to provide opportunities for their children, Massoud’s expected him to gain an education and pursue a professional career. Dutifully, he graduated from business school but eventually found the courage to tell his parents he wanted to go to culinary school. There were tears and remonstrations but ultimately Massoud’s success as a chef in New York City and celebrity status in Canada turned his parents’ disappointment to pride.

Massoud brings his restaurant experience and training in classical French technique to bear in his approach to traditional Egyptian cuisine, updating and modernizing recipes while staying true to the ingredients and flavour profiles of his family’s table. The result is a style of cooking that fits comfortably into the genre of Modern Middle Eastern cuisine, brought into the mainstream in recent years by chefs like Yotam Ottolenghi et al.

A personal introduction by Massoud (part of which I’ve recounted above), a guide to ingredients, sensible kitchen tips and a note on tools complete the first section of the book. The main body is divided into chapters In the Morning; Apps and Snacks; Soups and Sandwiches; Main Plates, Sweets to Fish; Essentials. Almost all recipes are accompanied by colour photographs.

I kicked off with the breakfast chapter. Massoud created Glazed Orange and Spice Olive Oil Cake as a healthy breakfast treat for his father. It contains only a little sugar, deriving its flavour from orange zest and sweet spices (cinnamon, allspice and anise), and a simple orange juice glaze. Olive oil and buttermilk create a moist and satisfying crumb. I strayed from the recipe a tiny bit, using yogurt in place of buttermilk, and ground star anise in place of anise. I also baked it in a loaf pan and added ten minutes to the cooking time. The cake turned out beautifully and brought rave reviews from my tasters. The lovely orange flavour developed even further the following day.

I couldn’t resist the psychedelic swirl of Pink and Gold Beet Dip with Pine Nuts in Apps and Snacks. Massoud describes the two-tone hummus-style dip as a showstopper and it is. You’ll need to make the recipe twice – once with red beets and once with golden — but it is well worth the effort for the stunning result, both in looks and flavour.

On to Salads and Sides and Three Pepper Baladi Salad. The baladi (country-style) salads I encountered in Egypt were simple combinations of whatever vegetables were in season, most often tomatoes, onion and cucumber. Massoud refines the concept by adding textural interest and nutty flavours with quinoa and sunflower seeds, a sprinkling of feta and a tangy fresh lemon vinaigrette. Even coated with the dressing, the leftovers held up well in the fridge until the following day, so this is a fine salad to make ahead of time.

Fire-Roasted Sweet Potatoes with Aleppo Pepper and Honey Butter (from the same chapter) are a riff on the roasted sweet potatoes street vendors sell in Egypt. These ones are gussied up with a sweet and spicy topping that marries beautifully with the soft flesh of the sweet potato.  Massoud bakes the potatoes in the oven and finishes them over an open flame to capture the smoky essence of the street version. I used a kitchen blowtorch which produced a nicely charred, bubbly surface with blackened bits of skin and pools of melted honey butter. Decidedly yum!

Not so much joy with Triple-Sesame Carrots with Goat Cheese. The three sesame elements are seeds, tahini and a sweet and spicy halva crumble that’s made with a boiled sugar syrup.  Although I followed the directions closely, the halva didn’t set up. Tahini varies by country of origin and from brand to brand. I suspect the type I used was too oily to work in this recipe. But the failed halva tasted fabulous so I dabbed it onto the carrots anyway. My tasters loved this dish and agreed that the combination of carrots with sesame and goat cheese is a winner.

Roasted Egyptian Potatoes with Onions and Peppers is a tasty side dish that would go with almost anything. The spuds are seared in a cast iron skillet, jazzed up with a coating of olive oil, tomato paste, cumin and chili flakes, then roasted in the oven. Simple, colourful, and tasty.

The aromas emanating from the kitchen as I was toasting spices for Grilled Cornish Hens with Lemon and Black Cumin from the Main Plates chapter roused the cat from her basket and the husband from his desk. The secrets to this dish are an overnight marinade for the birds in lemon, olive oil, honey and spices, followed by a coating of freshly toasted and ground spices applied before a two-step cooking process. The seasoned birds are seared in a hot pan to crisp the skin, then roasted in the oven. I didn’t have access to Cornish hens so I followed Massoud’s suggestion to use half a chicken, which emerged from the oven beautifully burnished, moist and flavourful. On the side I served Egyptian Rice from the Essentials chapter. The rice is cooked with small pieces of broken up vermicelli that have been fried in olive oil. They give the rice a nutty flavour and add a crunchy, contrasting texture.

At the end of the day Eat, Habibi, Eat! delivered a happy mix of dishes easy enough to whip up for weeknight meals and fancier fare to prepare when you have time for project cooking, or guests to impress. All of the dishes I tried were boldly flavoured and delicious, easy to execute (with the exception of the halva!) and intriguingly original. Cooks of all skill levels and dietary preferences will find plenty of inspiration here. Highly recommended.