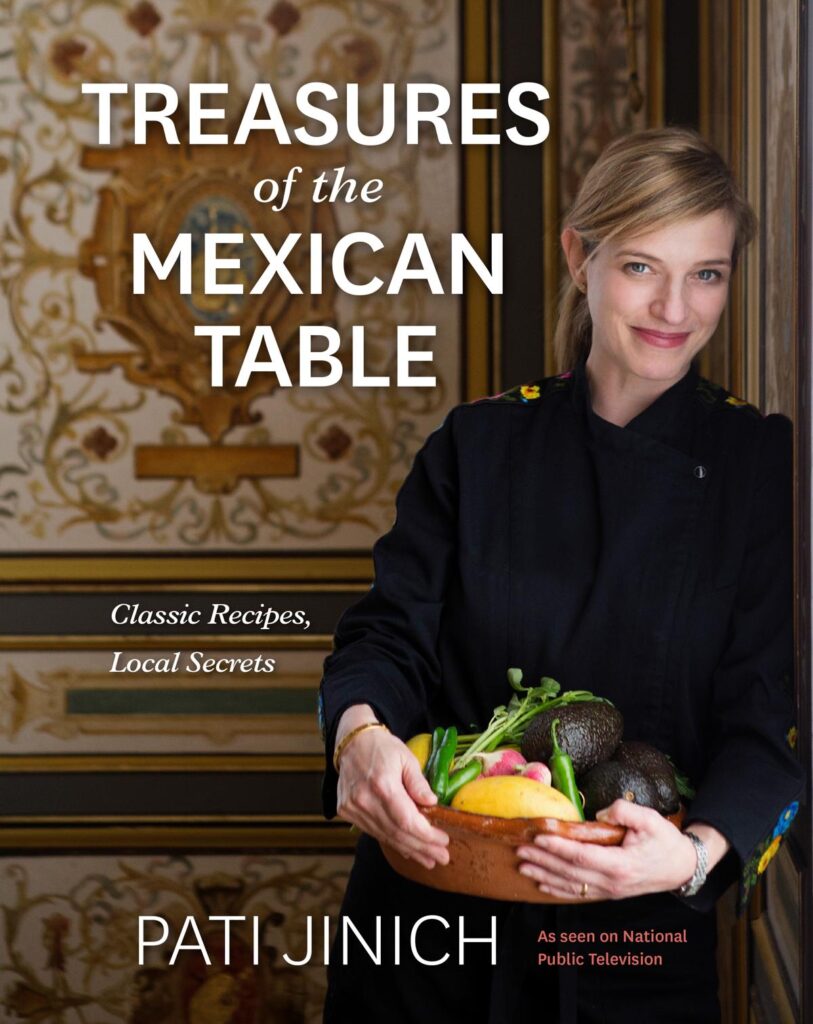 ati Jinich is both Mexican and Jewish, born and raised in Mexico City to a family of refugees from Eastern Europe. After marriage, she moved to the USA, first to Texas and then to Washington, DC where she now lives.

What began as cooking Mexican food for friends and neighbours blossomed into a PBS television series which went on to win three James Beard Awards. “Pati’s Mexican Table” is currently in its tenth season. Treasures of the Mexican Table is her second cookbook but my first introduction to her work.

The book’s 400-odd pages are divided into eleven chapters based on ingredient (eggs, seafood, pork etc) or types of dish (soups, salsas, tacos, desserts etc). There is much to learn in the headnotes and stories that accompany each dish. Jinich travelled throughout the country, collecting recipes that reflect the great geographical and cultural diversity of Mexico’s thirty two states and cooking alongside the keepers of recipes that in many cases have been handed down through generations.

Before the world went topsy turvy, I spent several winters in a rented house in the Yucatán. One of my greatest pleasures was the row of bowls on the tiled kitchen countertop that greeted me each morning, piled with limes, avocadoes, chile peppers, sour oranges, tomatoes and tomatillos in their papery husks — a bounty of fresh ingredients that promised a day of easy and delicious cooking. With a stack of warm corn tortillas picked up at El Nino Divino, the tortilleria just down the road, meals were a cinch to pull together.

Not so easy in Canada. While Jinich tested all the recipes in her American kitchen with locally purchased ingredients, further north Mexican ingredients can be harder to find. After some considerable sleuthing a small Latin grocery store yielded corn tortillas, dried chiles, achiote paste, crema and some Mexican cheeses. Tomatillos, nopales (cactus paddles) and poblano peppers proved more elusive but I eventually tracked them down in a specialty produce store.

And so to cooking.

Sopa de Lima (sweet lime and chicken soup from the Yucatán) was light and fresh but deeply chicken-y, its broth infused with roasted garlic and oregano building a rich base of flavour beneath the citrusy topnotes of lime.

Mini Pibis de Pollo (achiote chicken) next. The cooked, shredded chicken, flavoured with the achiote paste that is a signature of Yucatecan cuisine, is commonly used as a filling for tamales but, as Jinich points out, many fillings and wrappers in Mexican cuisine are interchangeable, so I used the chicken as a filling for soft tacos, with a drizzle of cool crema on top. Delicious!

Tok Seel (seared white beans with pumpkin seeds) is another distinctive dish from the Yucatán. The beans are seared until slightly crispy, then tossed with toasted and ground pumpkin seeds. It is an ancient Mayan dish, traditionally cooked in a large pot over an open fire, Jinich explains. Sizzling hot stones are dropped in to intensify the heat. No stones are required to cook this uniquely tasty dish at home.

Tinga de pollo con Chorizo y Papa (chicken tinga), shredded chicken cooked in a chipotle tomato sauce comes from the state of Puebla. This particular version, which includes chorizo and finely diced potatoes, is from the regional capital, Puebla City. It is very simple to pull together if you have cooked chicken at hand, or as Jinich suggests, even a rotisserie chicken, and a can of chipotle chiles in adobo sauce, which give the dish a good spicy kick.

Corn, zucchini and poblano are combined in a lot of differtent ways in Mexico, says Jinich. She describes Calabacitas de Tapachula (zucchini and corn in poblano sauce) as a kind of Mexican ratatouille. Fresh corn stripped from the cob and diced squash are cooked in a sauce of roasted and pureed poblanos. With a topping of melting panela cheese, it is comfort food indeed.

Ensala de Aguacate con Berros y Nuez (avocado, watercress and pecan salad) is an unusual but inspired combination, the peppery watercress, creamy avocado and nutty pecans brought together with a tangy dressing of lime, toasted chiles and roasted garlic. (You’ll find that recipe included here). For Huevos en Salsa Martajada (Oaxacan eggs in a roasted tomato salsa) scrambled eggs are combined with a spicy cooked chile and tomato salsa and a wedge of fried panela cheese. It’s described as a breakfast dish but left me in no need of lunch. Likewise Caviar Mañanero (morning caviar) — scrambled eggs with a tasty sauté of onions, chiles, tomatoes and nopales, the whole wrapped in flour tortillas.

The majority of recipes in Treasures are suitable for weeknight cooking (once those essential ingredients are at hand) but there are also more elaborate dishes that are great for project cooking. I was very happy with time spent on Gallina Pinta (chicken pozole or “speckled hen”), a delicious Sonoran stew of chicken with pinto beans and chewy kernels of hominy, spiced up with a roasted chile seasoning sauce.

There’s a full chapter devoted to salsas, which play such an important role in Mexican cuisine. We learn that many Mexican tacquerias develop their own salsa as a way of distinguishing themselves from the competition. Salsa Callejera (street-style salsa) is Jinich’s own house salsa and it’s now mine. It’s a cooked blend of tomatillos, tomatoes and chiles that keeps well in the fridge — an excellent, spicy condiment to daub on eggs, burgers, tacos, anything that will benefit from a lively flavour boost.

Interspersed among the recipes are notes that explain some of the intricacies of Mexican cuisine — such as the subtle differences between tortillas, tacos, burritos and chimichangas; the different qualities of various types of chile and Mexican cheeses; how to buy, clean and cook nopales. Jinich’s calm voice and relaxed style make cooking new dishes and working with perhaps unfamiliar ingredients seem easy and it is clear that her recipes have been well tested in a home kitchen.

To end on a sweet note, Pastel de Datil (date and pecan cake). Most of the sweetness in this superb cake comes from medjool dates, which are soaked and pureed in a food processor with the rest of the wet ingredients, then stirred into the dry. I made the mistake of adding the chopped pecans in at the end, instead of processing them until smooth in the batter but I (and my voracious tasters) very much liked the texture of the pecan nubbins.

A wise friend once said that there only needs to be one excellent “keeper” recipe to justify the purchase price of a cookbook. There are many such keepsakes in the appropriately titled Treasures of the Mexican Table, but if there had to be just one, it would be that cake.