The saga of Neue (rhymes with “Goya”) Cuisine, by the prominent New York chef Kurt Gutenbrunner with Jane Sigal, essentially began about a decade ago in chic Manhattan art and foodie circles. The Austrian-born Gutenbrunner’s emergence as a ‘name’ chef coincided with plans to found a resplendent new mini-museum on Fifth Avenue’s Museum Mile, dedicated to the flowering of fine, decorative and applied arts in Vienna between roughly 1900 and the late 1930s. The organizers invited Gutenbrunner to create a bijou coffeehouse on the ground floor of the building. From that moment the names ‘Neue Galerie New York’ and ‘Cafe Sabarsky’ were inseparable. 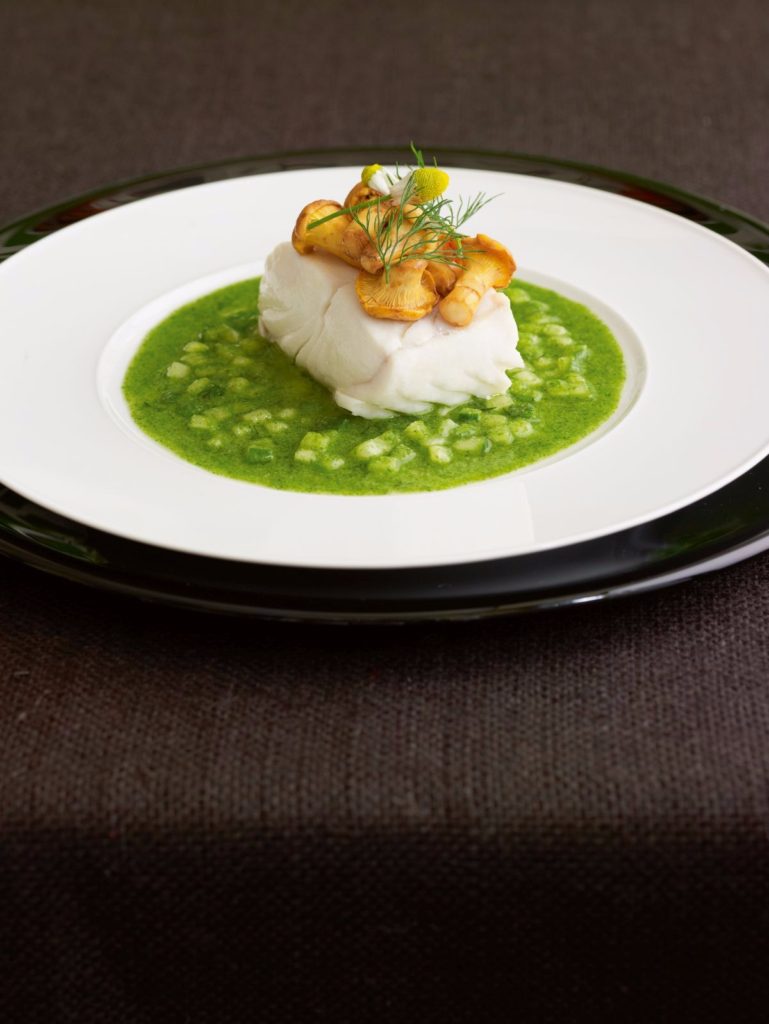 New Yorkers who would never have noticed Austrian food for its own sake have flocked to the attractive versions of it at Sabarsky and Gutenbrunner’s other principal showcases, Wallsé (a spelling of his Danubian home town, Wallsee, meant to forestall Yankee mispronunciations) and Blaue Gans (‘Blue Goose’). The sparkling Neue Galerie/Gutenbrunner synergy is undoubtedly what drew the art book publisher Rizzoli to the idea of an Austrian-themed cookbook.

For lovers of visual-feast cookbooks: Neue Cuisine may be the handsomest of the tribe this season, though in a style strikingly unlike most counterparts. The Neue Galerie and the ‘Vienna Secession’ movement that it celebrates impose a defining esthetic. The very typeface and page layout evoke the Vienna of Klimt, Schiele and the Wiener Werkstätte applied-arts practitioners. Dozens of reproductions from the museum collections share pride of place with about 40 photographs of premises, table accessories and plated dishes by Ellen Silverman — images notable for lucid serenity rather than the blowsy exaggeration so rife today. 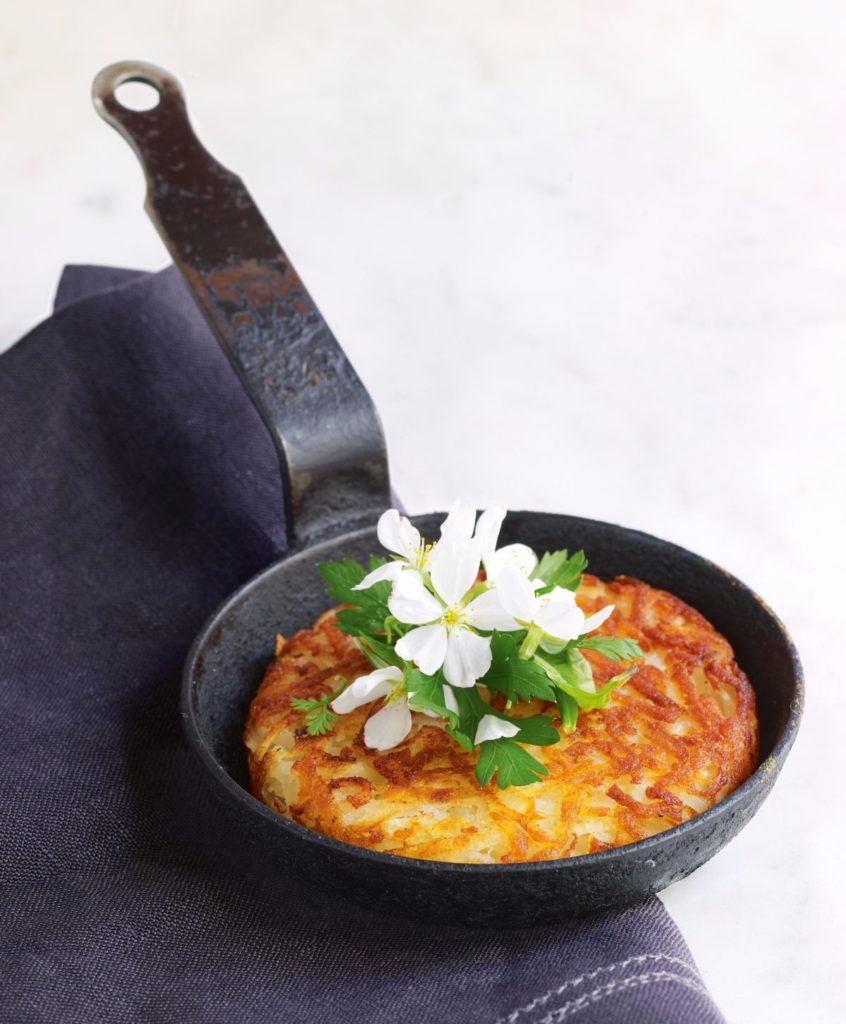 And the chef’s contribution? Gutenbrunner, as he says, enjoys imaginatively ‘interpreting’ Viennese-Austrian originals for contemporary New York palates, rather than trying to replicate a lost Alt Wien or travel regional Austrian byways. (For the first, seek out Franz Maier-Bruck’s Das Grosse Sacher Kochbuch; for the second, the same author’s Vom Essen auf dem Lande.) But ‘interpreting,’ as seen in the roughly 100 recipes, doesn’t mean riding roughshod over his culinary birthright.

The recipes consistently display a love of echt Austrian flavourings like marjoram, caraway, nutmeg and (in many sauces and broths) celery root. They manage to touch on major culinary foundations including different versions of dumplings, goulash and schnitzel. Vegetable and side dishes in general are among the consistent high points. Salads have a particularly nice balance of the well-trodden and original — witness ideas like turning the usual ingredients for braised red cabbage into a sweet-and-sour raw salad, or enlivening lettuce and radishes with toasted pumpkin seeds and pumpkin seed oil. You’ll also find the great monuments to Viennese skill in pastry-making: the many-layered Dobostorte, apple strudel, Mohr im Hemd (small chocolate-hazelnut pudding-cakes, doused in chocolate syrup) and much more.

In short, Neue Cuisine accomplishes several aims with resounding success. But no one should approach it with false expectations. The finished book perfectly realizes a certain editorial and design concept. It’s a thing of beauty and — thanks to the illuminating introduction “Vienna 1900: City of Dreams” and several shorter essays by assistant Neue Galerie curator Janis Staggs — a vehicle of instruction. It burnishes the images of both museum and chef. But in this nimble balancing act, culinary context tends to suffer.

Gutenbrunner and Sigal are given little room to say much about Austrian cooking in its own right. They’re obliged to squeeze disconnected fragments of information into tiny, often unhelpful tips at the foot of recipes. Neue Cuisine doesn’t seek to conjure up local Bodengeschmack (goût de terroir) anywhere from the Alps to the Slovakian border. It says almost nothing about the imperial Austro-Hungarian ethnic melting pot or the nuances of important ingredients — even things as basic as Hungarian paprika — on their home ground. We don’t learn the reasoning behind substitutions like Italian butterfly pasta for egg-noodle squares (Fleckerl). The listing of recipe contents essentially ignores original German names.

Such lacunae won’t trouble many Sabarsky-Wallsé-Blaue Gans loyalists. Indeed, addressing these gaps would have been difficult without wrecking the carefully gauged overall proportions of the book.

The mix of ‘peasanty’ and ‘chefy’ recipes will be a selling point for some readers, a drawback for others. I’d love more dishes on the order of Gutenbrunner’s roast pork hocks with sauerkraut or boiled calf tongue. On the other hand, some people will head straight for things like a daunting oxtail consomme involving red wine, port and Madeira, with a lengthy clarifying-enriching stage; or a tomato “consomme” requiring 12 pounds of tomatoes to make 4 servings.

The news about the merits of the recipes is mixed. First and foremost: you can cook some great dishes from them. Blood sausage-potato “hash” served with sauerkraut was deeply satisfying if — in my kitchen — not exactly photogenic. So was Gutenbrunner’s noodle-ham gratin, butterfly pasta and all. I loved the red cabbage-apple salad and (with some adjustments) a simple zucchini salad. A pork-based take on Jägerschnitzel (‘hunter’s schnitzel’) used enough cream and butter to sink a battleship and was absolutely delicious. 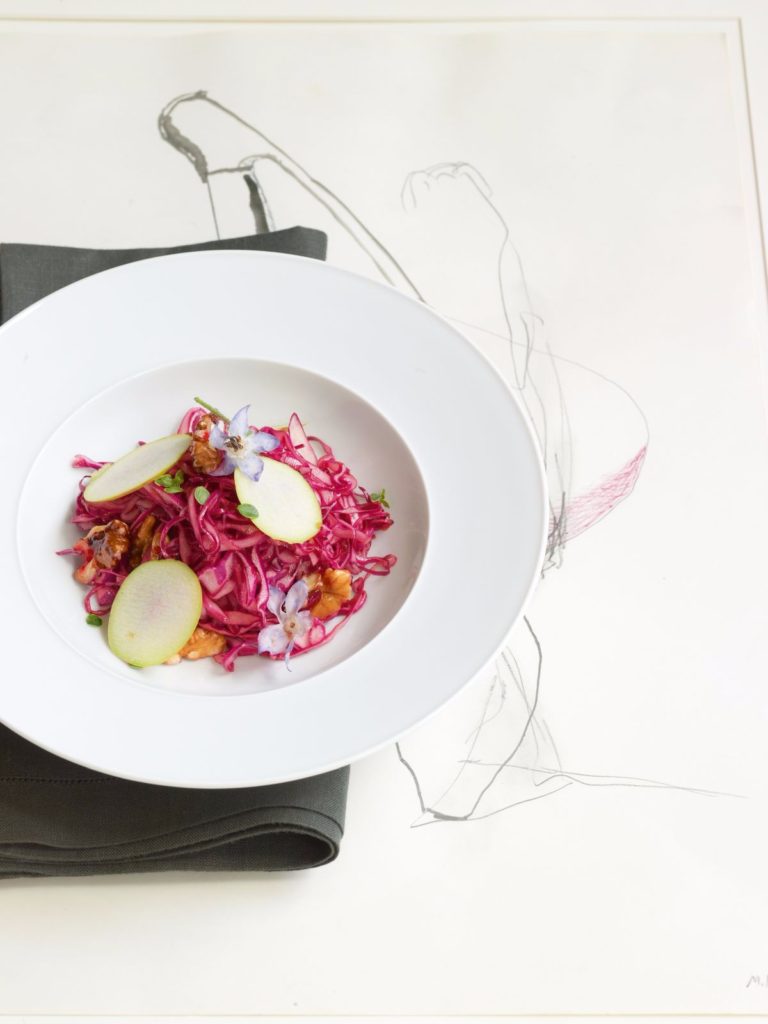 But it’s hard to ignore some pretty thoughtless recipe-writing or -editing — like naming Boskoop as a preferred variety for baked apples (they’re commercially unavailable in most of North America). Or dressing a pound of zucchini with more than a tablespoon of salt. (You must either serve it instantaneously or deal with the liquid that collects in marinating.) Or using “a medium saucepan” to heat half a cup of sauerkraut with two tablespoons of stock, or estimating that a pound of pasta and three quarters of a pound of ham — together with cream, sour cream, and shredded cheese — will yield four noodle-ham gratin “starter” portions. (The specified eight-inch gratin dish, by the way, was far too small.)

Is Neue Cuisine a worthy tribute to contemporary Austrian or Austrian-inspired cooking despite such stumbles in execution? Yes, indeed. The recipes are best tackled by cooks skilled in troubleshooting. But their pleasures are many and — considering the English-speaking world’s general neglect of the subject — more than welcome.