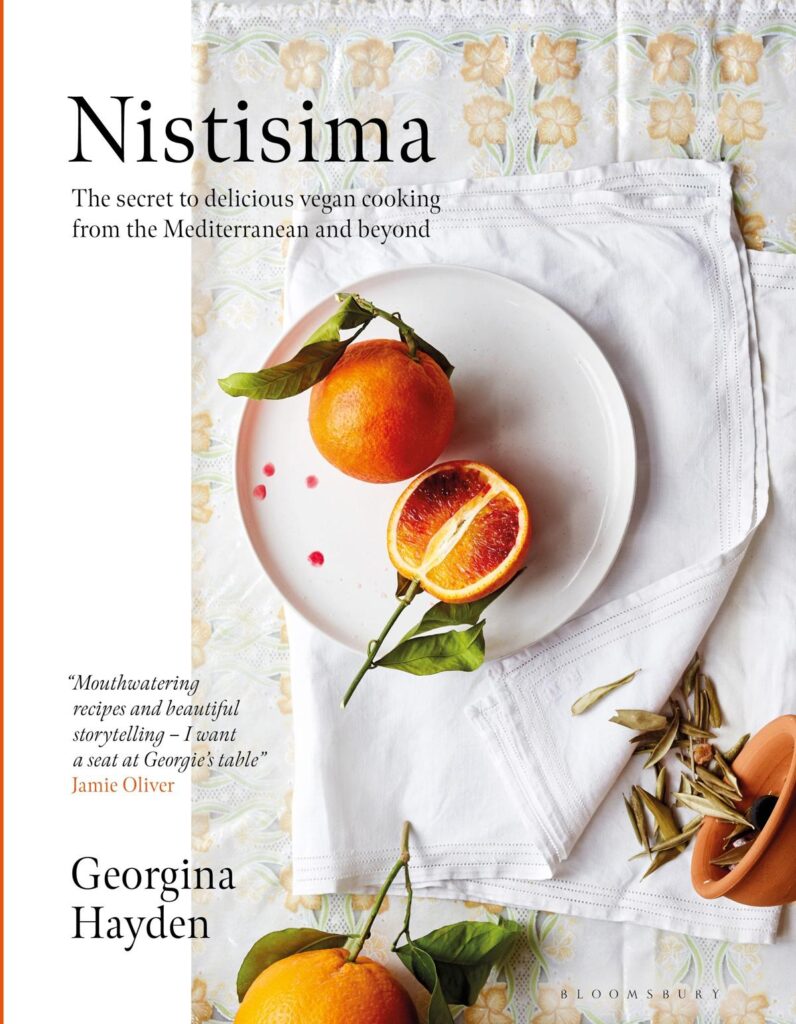 ’m not a vegan and generally would tend not to choose a vegan cookbook to review. But I found the premise of Nistisima intriguing. The dietary restrictions that give purpose to this collection of recipes stem not from the latest culinary trends but from the centuries-old tenets of the Greek Orthodox church.

“The Greek word nistisima translates as Lenten, or fasting, foods,” writes author Georgina Hayden, a London-based cook, food writer and stylist who grew up above her grandparents’ Greek Cypriot taverna and has penned two previous cookbooks. We learn that people who follow the Orthodox faith in Greece and Cyprus may refrain from consuming animal products for as many as 200 days a year. Hayden explains the ground rules, devoting a chapter to a list of the fast days and feast days in the Orthodox liturgical calendar and the dietary restrictions linked to each. They vary – sometimes fish is allowed, sometimes not, other times oil, wine and dairy are forbidden, but on weekends oil is okay. In general Wednesdays and Fridays are fast days and olive oil is forbidden, but some kinds of shellfish are allowed. To someone not raised in the Orthodox tradition, it all seems rather complicated but as Hayden explains, fasting is part of a cultural and spiritual world that unites people of the Orthodox faith no matter where they may reside.

What appealed to me is that recipes in this collection are rooted in culinary traditions that long predate the developments of food science that have given us such an array of alternative, and often highly processed, products for people following restrictive dietary regimes (paleo, vegan, vegetarian, sugar-free, gluten-free, etc.) So you won’t find recipes calling for ingredients like vegan cream cheese, faux meat or plant-based chick’n nuggets, but you will find nourishing, tasty dishes based on the vegetables, pulses and grains that have sustained people of the Mediterranean for generations. These are from-scratch recipes that contain the wisdom of grandmothers (yiayias) and the refinements that come from years of experience in the kitchen.

After reading the fascinating introductory chapters (including an essay on Mount Athos, the centre of the Eastern Orthodox church located in Northern Greece, where twenty monasteries house more than 2,000 monks who live an ascetic and largely self-sufficient life) I was keen to get cooking. But the heavens opened, a wall of wind and rain blasted my house and the power went out. For ten days.

Fortunately, the bulk of recipes in Nistisima date from historic times when kitchens were simple affairs, often equipped only with a central hearth. My single-burner propane camping stove proved ironically appropriate for recipe testing.

I began with Pepper-Braised Cabbage Wedges. Thick wedges of cabbage are seared in a hot skillet until the cut sides are charred and caramelized, then they’re braised slowly in a mixture of onion, tomato and peppers until tender. The result is a deeply satisfying dish, full of flavour and with contrasting textures of silky sauce and toothsome cabbage. The recipe, based on a classic Romanian dish, writes Hayden, “is one to convert cabbage avoiders.” Agreed.

Slow-Cooked Peppers is another recipe that relies on technique as much as ingredient. As Hayden writes: “This is one of the best examples I can think of to show you how much can be achieved with careful cooking.” Bell peppers, onions, garlic and tomatoes are babied on the stove for 1 ½ to 2 hours, until they are reduced to an intensely sweet mélange. In non-fasting times, Hayden says, proteins are often cooked along with the peppers. I poached an egg in the mixture, shakshuka style, and ate it happily with toast.

A similar attention to technique transformed a clutch of humble zucchini into Maroulla’s Spiced Courgettes, with a beguiling mixture of seven Lebanese spices adding complex layers of flavour to the squash, which is cooked until pleasingly squishy.

Two soups – Lentil and Pasta, and Roasted Squash, Lentil and Coriander – were delicious, and each substantial enough for a meal-in-a-bowl. The pasta called for in the former is fresh tagliatelle, which I couldn’t find, so I substituted fettucine, cooked from dry then added to the soup, with fine results. So please do try the recipe included here, even if dry pasta is all you have.

I liked the concept of Sauerkraut and Herb Potato Salad (sans mayo), but found the taste of red onion and garlic, even tempered by a soak in vinegar to be overpowering, so I would reduce these next time around. Mushroom and Caramelized Onion Pilaf, with a mixture of dried and fresh mushrooms, cooked in vegetable stock with onions, rice and little pieces of vermicelli, was tasty, robust and filling.

When electricity was eventually restored, I turned to dishes cooked in the oven.

Little Za’atar Buns – yeasted pinwheels made with olive oil and the herb mixture za’atar are a cinch to make, lovely to look at and very more-ish. Crushed Coriander and Olive Potatoes (baby spuds roasted with coriander seeds and black olives) were yummy. Mushroom, Potato and Cumin Bourekia – little puff pastry pies with a very savoury filling — were a favourite in my household, with eaters smacking their lips and licking their fingers. These are tiny finger-food pies and fiddly to make. I had quite a lot of filling leftover so next time around I’d be inclined to make them in a bigger size.

Even more fiddlesome to make were Apricot, Beer and Walnut Rolls, little cookies with a jam filling and a coating of sugar syrup and nuts. Hayden suggests trying different combinations of jam and nuts – I used homemade plum jam and pecans. The type of beer is unspecified so I went with a citrus wheat ale. I got into a sticky mess turning the cookies in the syrup and rolling them in the crushed nuts but the result was worth the effort. The cookies are unusual and not too sweet, excellent with a cup of coffee.

Overall, I was very impressed with Nistisima. The recipes are well crafted, easy to follow and deliver heaps of satisfying flavour. Vegans and vegetarians will find plenty of healthy and delicious recipes in these pages, and more importantly, a foundation in the principles of cooking from scratch and building flavour in simple ingredients with artful techniques. If like me, you’re an omnivore who loves vegetables and would like some new (old!) ways to prepare them, along with an insight into the spiritual and cultural connections that food brings to the Orthodox table, Nistisima is a joy.

Florentine
Dining Alone: Stories From The Table For One
Feeding the Dragon : A culinary travelogue through China with recipes