The first tender leaves of the season were fluttering on the trees as our small group gathered in Parc du Portugal on a bright spring morning in Montreal. Frances pulled a hip flask from her satchel, poured six tots of whisky and instructed us to turn toward a grey stone triplex overlooking the square. “Lcheim!” we raised a toast to its former occupant.

The late Leonard Cohen was one of Montreal’s most famous modern Jewish sons, along with the writer Mordecai Richler. And in the footsteps of these cultural icons, a new generation of Jewish Montrealers are celebrating their heritage in a different way – with food.

Mélissa Simard, a transplant from BC, has an Honours degree in Canadian Studies from McGill University, and is a professional chef. Her interest in the links between history, food and identity inspired her to establish Round Table Tours, a company offering small-group walking tours through Montreal’s iconic neighbourhoods.

You may already associate bagels and smoked meat with Montreal, but did you know that both are derivatives of traditional Ashkenazi foods? I didn’t — but following Frances, our Round Table Tour guide, along the boulevards and side streets of the old Jewish Quarter in Mile End, I learned about Yiddish culture and cuisine, while meeting some of the purveyors of Montreal’s most celebrated Jewish foods.

We kicked off at Lester’s Deli in Outremont, on the outer edge of the Jewish Quarter. The signature dish here is pastrami-style smoked meat (meaning it’s brined, not dry-rubbed, and is cut from the less fatty end of the brisket). The meat, all lean, piled between two slices of rye, came with a generous scoop of chopped liver (beef, not the usual chicken) and slices of smoked salmon on the side. We’d been told to come hungry.

Everyone is well fed at Lester’s. Owner Billy ‘Lester’ Berenholc took over the business from his father and has been serving up smoked meat sandwiches since he was 16. He’s known to squirt customers with a mustard bottle that spits out a yellow plastic string, a gag that never gets old.

Next up, Cheskie’s Heimishe (home-style) Bakery, established by a family of Hasidic Jews originally from New York. Hasidim make up only about 10 percent of Montreal’s 90,000-strong Jewish population but they are plenty evident in this neighbourhood. Men and boys sport the distinctive long coats and ringlets, women favour demure skirts that fall mid-ankle, both genders dress in black. In the line-up for rugelach and Cheskie’s famous chocolate babka, a young Jewish nanny with a peaches and cream complexion, in long skirt and black bonnet, shepherded a gaggle of infants tied together with wrist straps.

We learned about Montreal’s Bagel Wars on our way to St Viateur, home of the city’s favourite ring (according to some). We saw the dough being stretched and rolled by hand, and manouvered in and out of a wood-burning oven with the aid of a skinny, eight-foot-long paddle. It takes about six months to learn the craft, Frances informed us. We left with a bag of bagels still warm from the oven and marched a few blocks to rival Fairmount Bagel, home of the city’s other favourite ring. To see what kind of partisans we were, we performed a side-by-side test, two sesame seed bagels, eaten plain. St Viateur, chewy and slightly sweet, Fairmount softer and not sweet at all. When Frances took a vote we had a tie.  Personally, I liked Fairmount for texture and St Viateur for taste but why split hairs when you can split a bagel? 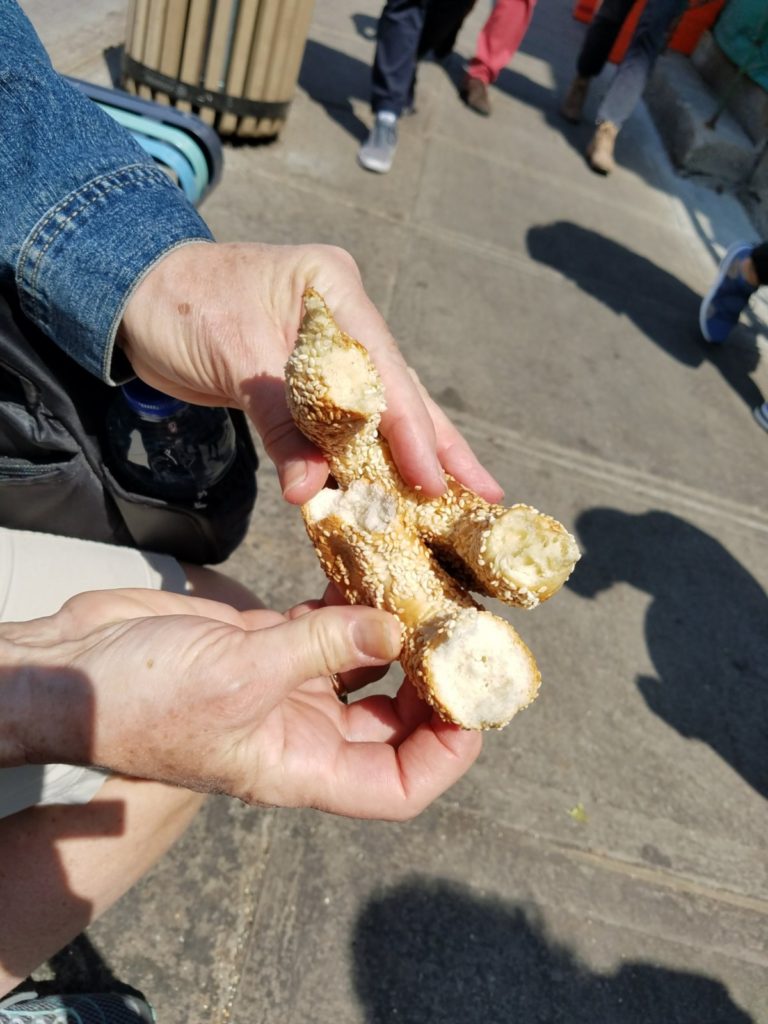 On the way to Fairmount we passed Mordecai Richler’s house. The late author (The Apprenticeship of Duddy Kravitz and Barney’s Version among other works) was ostracized by some sectors of Montreal society for his vocal criticism of Quebec’s 1970s French language laws but he is now officially recognized with an eponymous gazebo and a marvelous mural on Laurier Ave West near where he grew up. One of his favourite local haunts – Wilensky’s Light Lunch — was our next stop.

Walking through the door of Wilensky’s (founded by Moe Wilensky in 1932) was like stepping back in time. A kid in a baseball cap working an old fashioned soda fountain and a handful of locals propping up a lunch counter lined with stools. Newspaper clippings and memorabilia adorn the walls, along with a few shelves of used books.

The only thing to order here is a Wilensky Special – a no-nonsense rib sticker of beef salami and beef pastrami in a Kaiser bun, squished in a sandwich press. Cheese — cheddar or Swiss — is optional, mustard, obligatory. Moe Wiliensky’s father was a barber and this the sandwich he made for lunch. It smelled so good, the story goes, his customers wanted in. Running the show now is Sharon Wilensky, his daughter, who’s been working the counter since she was a child, under the watchful eye of her mother Ruth, who passed away recently at the impressive age of 98. Ruth’s granddaughter, Sharon’s niece, is the soda jerk.

On to Boulangerie Hof Kelsten, a modern bakery where founder Jeff Finklestein turns out artisanal bread and pastries, and puts an individual spin on brunch dishes like shakshuka and chicken salad. His chocolate Danish, with expertly laminated croissant pastry, was flakey and delicious. The onion-topped bialy — the bagel’s older, Polish brother — also very good.

Our tummy-stretching tour ended at the legendary Schwartz’s Deli, one of Montreal’s most famous culinary landmarks. The line-ups are lengthy but thankfully there’s no waiting if you’re on a Round Table Tour. Frances phoned ahead and our brown paper bag order was ready for pick-up from a counterman with an enormously cheery grin. Down a side road we found a perch on the steps of the historic Bagg Street Shul synagogue. Frances unpacked the spoils – a sandwich for each plus a fat pickle and a can of black cherry soda. I was so full I could barely take a bite but Schwartz’s smoked meat is all it’s cracked up to be – juicy, a little bit fatty, lip-smackingly tasty. What I couldn’t finish, I wrapped up and stowed in my purse. I ate it for supper in my hotel room, watching Richard Dreyfuss, in a rerun of The Apprenticeship of Duddy Kravitz, bring the streets I’d walked with Frances to life.