There’s something extremely satisfying about happening upon a destination before others are aware of it — including some who live in the immediate area. Puglia is one of those places. While attending a conference in Milan in 2006, I learned on the last day that I was being plucked from a post-convention wine tour in Campania and re-routed to Puglia.

The itinerary suggested it would be a leisurely series of visits to winemakers working to elevate Puglia’s viticultural reputation, given its past as a bulk wine production hub. It would be interesting to see and taste wines that could compete with Tuscan and Venetian wines yet express their own unique personalities. I envisioned doing this with views of rustic Italian masserias (manor houses with farms), rolling vineyards abutting the sea and heaping plates of just-caught seafood.

Indeed, there was all of that, but jam-packed into a four-day whirlwind covering 20 wineries. It was fun to trade observations with fellow wine writers from around the world about what exactly set Apulian wines apart. We agreed they would be right at home in the warmer climates of Arizona, California, Florida, Okinawa, Veracruz and Cairo — and harmonize well with those local cuisines.

Puglia was still finding itself as a destination back in 2006 but the restaurants and markets were already playing the regional food and wine game brilliantly. Winning pairings abounded, from less-is-molto dishes with simple ingredients and/or seafood in buttery sauces with crisp white wines to rich-yet-approachable Negromaro and Primitivo red varietal wines with stews and pastas. If this cup-runneth-over itinerary left me wanting even more, I figured Puglia had the potential to transition from a diamond-in-the-rough to a hidden gem poised to have more than a moment.  A subsequent trip to Puglia in 2013 proved that its chefs, winemakers and hoteliers were up to the challenge. And these artisans still are, with growing interest in Puglia’s wines, home-grown cheeses, smoking techniques and seafood.

Puglia’s restaurant and food landscape has not so much changed as it has expanded in the past 15 years, encompassing roadside vegetable and cheese vendors (the source for the freshest buffalo mozzarella and burrata), boutique-y white tablecloth bistros, cavernous cellar-style dining rooms with long tables, beachfront fish cafes and generations-old, no-frills family restaurants outside city centres.

Lodging options at various price points serve up the right balance of centuries-old traditions and modern appointments. Prime examples are the sprawling and graceful Masseria Potenti farmhouse in Manduria and the centrally-located Corteinfiore Luxury Charme in Trani, whose 18th-century structure encompasses earlier ruins. And as far as wine goes, while the bold Negromaro and Primitivo reds are as popular as ever with locals and Italian wine enthusiasts everywhere, producers are now releasing and shining a spotlight on Puglia rosé wines, now gaining prominence in global competitions and shows.

My more recent Puglia experience began with a late afternoon arrival at Masseria de Potenti, which opens out into a sea of white Mediterranean serenity. Every room has its own courtyard and little garden, along with lots of details to awaken one’s inner interior decorator. The best thing for a guest to do after check-in is order a glass of chilled Apulian rosé and let simple things like chirping birds and the rustle of the wind erase any recall of the long flight over. My first dinner served as an excellent primer to the immediate area’s main varietals and producers. Brimming plates of bruschetta, foccacia stuffed with raisins and escarole, grilled stuffed pepper roulade with mint, and eggplant prepared paté style, were paired with a mix of reds, whites and rosés from several different producers.

As many trendy restaurants have blossomed over the last 15 years, pinpointing the best can be overwhelming, especially in bigger towns like Taranto, Lecce and Trani. One sure-fire way to seek out the Apulian peninsula’s best is to plot a course from the south back to the north of the “heel,” following this simple recipe: One or two lingering winery visits per day (or a small handful of shorter visits, if you must), followed by an hour-long stroll in a nearby town. Top it off with lunch or dinner at a restaurant the winemakers and their families have been patronizing for years. There’s something to be said for dining recommendations from Puglia’s winemakers, given their intimate knowledge of the growing seasons and the best produce, or the fact that the chef is like a member of the family (or in some cases, is a member of the family).

Masseria Potenti adjoins the Salento Peninsula, whose vineyard soils are enriched by the sea. My route encompassed the Mottura and Varvaglione 1921 wineries, and visits to the charming and very different towns of Gallipoli and Taranto.

At a table in a tasting room overlooking one of the Mottura vineyards, Barbara Mottura and her father, Pasquale, shed light on how Puglia’s wine producers are taking full advantage of the area’s natural attributes to create and bottle a higher calibre of wine.

“Vines, like people, become lazy, so we have to make a greater effort to get the nutrients from the soil to the berries,” explains Barbara Mottura as she gestures towards a row of glasses holding Negromaro varietal wines and red blends from their different labels offered at varying price points. “The smaller you keep the bushes, the less the water has to struggle to reach the berries. The leaves on the bushes, meanwhile, protect the grapes from sunburn. This produces lower grape quantities, but better grapes.”

After a walk around the vineyards, Barbara and Pasquale bring us to Gallipoli, a faded-pastel coloured fishing village surrounded by attractively worn fortress walls. Along the walls leading into town, there’s an impromptu-seeming fish market with its own opera singing vendor and buckets of freshly harvested crustaceans and small fish. Nearing the town centre is a massive gelateria, Accadamia del Gusto, that dovetails into streets lined with a couple of weathered but ornate cathedrals, fish-focused cafes, and boutiques offering pottery, leather sandals, jewelry and other handcrafted souvenirs. 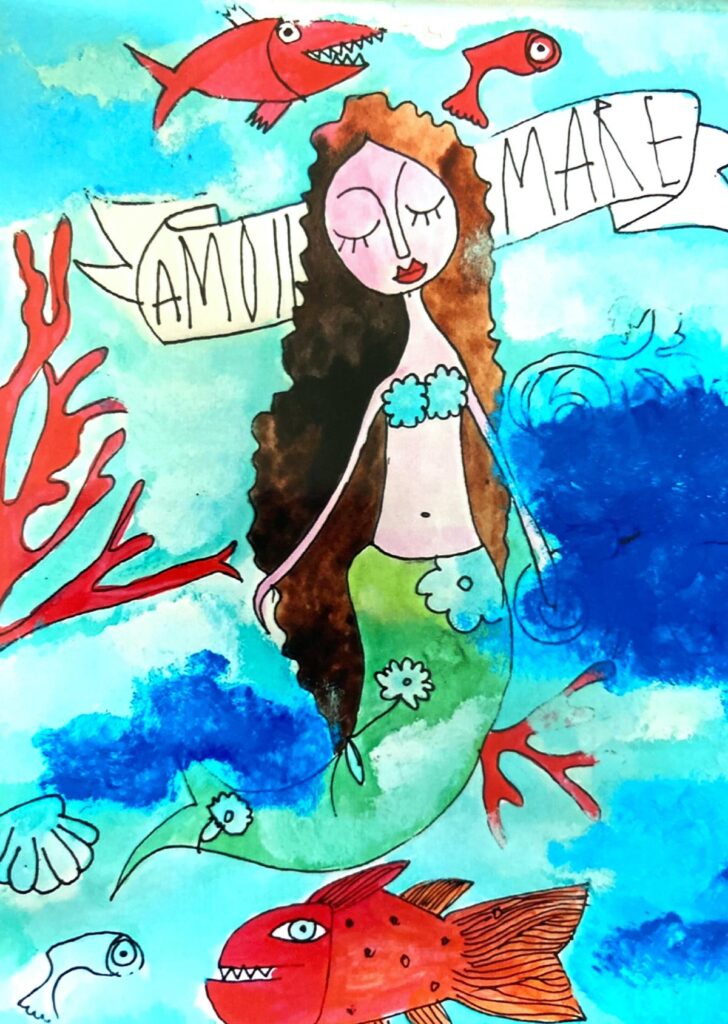 Outside the walls along the marina is the brightly coloured Ristorante Marechiaro, where seafood doesn’t get any fresher. Refrigerator cases contain works of art made up of prawns, crabs, clams and scale fish. Chilled seafood salad and risotto with grilled shrimp, clams and zucchini are washed down with Mottura Negroamaro Rosé Spumante Extra Dry and Mottura Fiano del Salento IGT, while grilled swordfish is partnered with a lighter-bodied Primitivo under the Le Pitre label.

We walk off lunch at the 120-hectare Varvaglione 1921 winery with patriarch Cosimo Varvaglione, who introduces us to the on-site enologist who explains that major universities (Universita’ Di Udine in Veneto and Universita’ Di Bologna) have worked closely with the winery to improve its production standards. While Varvaglione 1921 produces Puglia’s signature Primitivo and Negromaro red varietals, the winery is also developing white and rosé production, emphasizing indigenous grapes including Verdeca del Salento and the aromatic Malvasia Bianca del Salento.

We have a brief walking tour of Taranto, but I find the best way to experience the city is at sunset aboard a boat. We follow Cosimo’s lead, enjoying Varvaglione “Primo” Spumante Brut Falanghina with local charcuterie and cheese. A dinner at Ristorante Al Faro (adjoining a chic boutique hotel on the waterfront) follows with a string of seafood dishes that draw out the vineyard’s sea-influenced terroir. We mix and match the winery’s various whites with grilled octopus, peppered mussels, a seafood gratin, deep fried calamari and other shellfish. Reds are reserved for the heartier pasta dishes and main course of sea bass in marinara sauce, demonstrating that good reds with a lighter body suited for seafood can be achieved with the right attention to detail.

The next morning, our route takes us through the DOC and IGT Salice Salentino growing areas between Brindisi and Lecce. The southern tip of Puglia is noted for its output of extremely ripe and sweet indigenous grapes. The first winery of the day, Cantine de Falco, is located in Novoli, in the heart of Salento’s wine producing area and minutes from Lecce. In recent years, the winery has become famous for its painstaking cultivations of Negroamaro, Malvasia, Primitivo, Squinzano and DOC Salice Salentino grapes from vines that average around 30 years old. 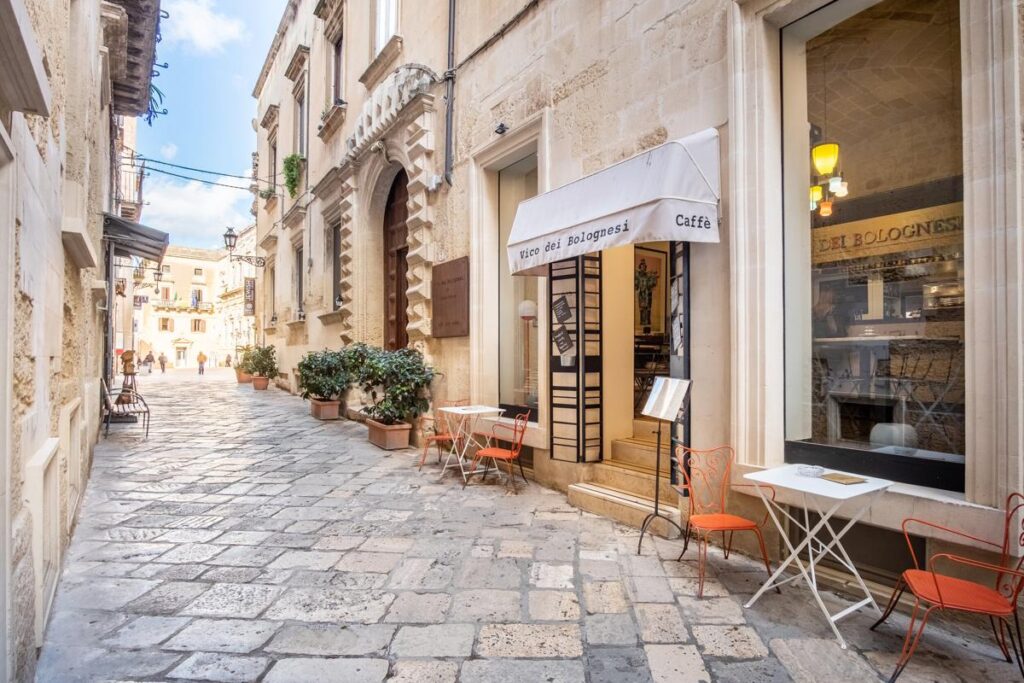 After sampling some expressions of the Falco Nero Riserva from 2013 and 2014 in the barrel room, we mix and match chilled Rosato Salento IGT 2016, Stelle De Lorenzo DOP 2018 and Caolino Salento IGT with lunch at Vico Cafe & Bistrot, at Personè Ristorante e Palazzo hotel in Lecce. While large plates of mostly vegetarian dishes (fava bean stew, oven-baked spinach, roasted pepper and eggplant salads, tomato and burrata skewers and farro salads) are interspersed with bottles of de Falco wines, there’s a buffet of architectural delights beyond the eatery. The Santa Croce Cathedral and other baroque buildings stand just outside, and the hotel itself sits atop beautifully preserved remnants of a medieval synagogue discovered during construction. The owners have kept the ruins intact, protected with plexiglass floors in the rooms above.

After lunch, we pay a visit to the Conti Leone de Castris winery, our final stop in the Salento growing region. From there, we head to northern Puglia and a different wine growing landscape. In the Castel Del Monte DOC we stop for a short sampling of top-tier red wines in the tasting room of the De Corato family-owned Cantine Rivera, followed by a stroll through Trani’s genteel, boutique-lined streets and Riviera-like waterfront. Dinner is at La Banchina, the De Corato’s standby for seafood in this town known as the Pearl of Puglia.

The final day is dedicated to Tomaresca winery, which owns Masseria Maime Estate in Salento to the south and Bocca di Lupo Estate near Trani. Bocca di Lupo has all of the trappings of a classic European winery as well as an extraordinary kitchen which turned out a simple but copious lunch of freshly baked focaccia, roasted vegetables, fish and chicken to accompany its wine flights. Most impressive however is the certified organic production area that includes a photovoltaic plant on the rooftop and machinery that measures its carbon and water footprint. The nearby UNESCO Heritage-designated a 13th-century citadel Castel Del Monte is an ideal place for a post feast workout with its many staircases and stunning wine country views.

Tormaresca stages the final wine dinner at the fine dining restaurant of our hotel, Le Stanze di Corteinfiore. Each course pairs a modern twist on a traditional Apulian recipe (fillet of red mullet marinated with herbs, shrimp grilled with ricotta mousse, baked calamari with cherry tomatoes and a steamed grouper topped with shellfish bisque foam) with one of the estate’s complex but approachable whites such as the Tormaresca Pietrabianca Castel del Monte Doc (a bright Chardonnay/Fiano blend) and Tormaresca Roycello Salento, IGT.

While the Corteinfiore offered a beautiful continental breakfast of decadent breads and pastries, I wanted to eat like a local and opted for Osteria Perla del Sud and a personal sized margherita pizza. With home-grown buffalo mozzarella, fresh basil and tomatoes, it was one of the more perfect versions of the dish I had tried and spoke volumes about this appealing region of winding roads, sun-splashed vineyards, unique architecture and ancient ruins.

Switzerland
From Luxembourg with Love
Mad for Marseille