Panama City boasts an abundance of rooftops, reflections, angles and curves. The sheer scale of the buildings in the “Dubai of the Americas”, many over 60 storeys high, make for dazzling, if dizzying, panoramic views. The skyscrapers of downtown confuse the mind with their deep plunging verticals and mirrored windows, revealing 360 degrees of vertiginous skyline, sprawling city grid and the undulating Gulf of Panama coastline. The more human-scaled buildings in the old town, Casco Viejo, provide equally compelling views over the Spanish colonial-era network of red tile roofs, melding together the old with the new.

Where better to find a great rooftop bar?

Panama City emerged as an international centre for business and trade after the completion of the Panama Canal in 1914. Today it’s the wealthiest city in Latin America. With continued foreign investment and the recent canal expansion, the city is poised to continue its transformation. For us, this means sizzling nightlife and great bars and restaurants. Panama has 14 of the 25 tallest buildings in Latin America and The Marriott (originally the Trump Ocean Club), has the highest floor count, at 70. Many of the hotels offer exceptional rooftop bars and pools for guests.

In spite of the financial boom, the city is still grounded by its cultural influences and history. Casco Viejo, where Panama City was founded, is a UNESCO-designated historic district. Following the destruction of the first settlement by Captain Henry Morgan in 1671, the Spanish moved the city to the rocky peninsula where Casco Viejo still stands. Surrounded by the imposing rock wall originally built to defend the city from invaders, Casco is a step back in time. As urban expansion pushed the boundaries of Panama City further out around the turn of the century, the city’s elite left Casco Viejo and the neighbourhood rapidly deteriorated into a slum, with crumbling architecture. Fortunately, most of the buildings have now been lovingly restored and the neighbourhood revitalized, home to many restaurants, cafes, shops, hotels and renovated historic buildings.

From any elevated vantage point in Casco Viejo, the town stretches out before you in a labyrinth of churches, plazas and palaces while the modern towers of downtown rise up like sharp-edged glaciers across the bay. Continuously changing cloud formations add drama to every view.

With a delicious cocktail in hand made from fresh local ingredients, it’s easy to fall in love with Panama City.

To get a seat on the patio of the spectacular rooftop bar on the 66th floor of this 70-storey, sail-shaped building, get here early. The incredible infinity pool looks like it slides off the side of the tower, so it’s just as well we can’t swim in it. It’s just for show but it adds an element of glamour and sophistication.

The building was taken over in 2018 by JW Marriott following a dispute, where the Property Management company reportedly had to use a crowbar to strip the Trump name off the building. The JW Marriott is the tallest building in Panama and in Central America. The tower apparently resembles the Burj Al Arab Hotel in Dubai, which is the tallest in the world at 163 floors.

A glitzy, glamorous venue, the rooftop bar of the Hard Rock Cafe, “BITS,” is on the 62nd floor of the 63-storey Hard Rock Hotel Panama Megapolis. This indoor and outdoor lounge is stylish and upscale, with sprawling red and pink satin lounge chairs and comfy couches. It has wonderful views of La Cinta Costera (the coastal beltway which has a 2.5 km pedestrian walkway running along the waterfront to Casco Viejo) and exquisite cocktails.

The W Hotel in Panama City is the Marriot W Brand’s first Central American property. The W Hotel’s WET Deck is a pool bar on the 15th floor of the 50-storey W Panama Hotel. It’s a fairly recent, sleek, modern addition to the Panama City rooftop bar scene. Centrally located, it has the sought-after W vibe, views over the Cinta Costera and the downtown skyline, as well as a pool you can swim in.

Tantalizing food and wonderful views are yours on the rooftop of the industrial-chic Tantalo Hotel at Happy Hour. As the sun sets over the red tile roofs of the white colonial buildings of Casco, we wash down delicious fusion-style tapas (think quinoa and chickpea salad, sautéed octopus with coconut milk) with a Michelada, a Mexican cocktail made with beer, tomato juice, lime and hot sauce. The glowing dome of the Iglesia Merced is so close I feel like I can reach out and touch it. Tantalo is a ten-room boutique hotel with a bar and restaurant on the ground floor, but the rooftop terrace is the main attraction.

Next door to Tantalo is another fantastic rooftop bar, Gatto Blanco, which is on the top of the Hotel Casa Nuratti. It has an intimate atmosphere with live music Tuesday nights. Wednesdays are ladies nights, with $1 glasses of sangria. Walk through the stylish lobby to get the elevator to the rooftop.

The five-storey Casa Casco building has three floors of restaurants; the independently-run Marula, Naciyn Sushi and Mano de Tigre. On the fourth floor is the nightclub, Casco Club and at the top, the decadent terrace bar. The cuisine ranges from Japanese to Central American fusion. From the roof, watch the locals gather in the charming Plaza Herrara below, an historic hub of the neighbourhood, or peer into the large rooms of the stylish American Hotel on Avenida Central. Then watch the sun set over the old town, coming to rest on the beautifully restored Hotel Central on the Plaza Independencia. 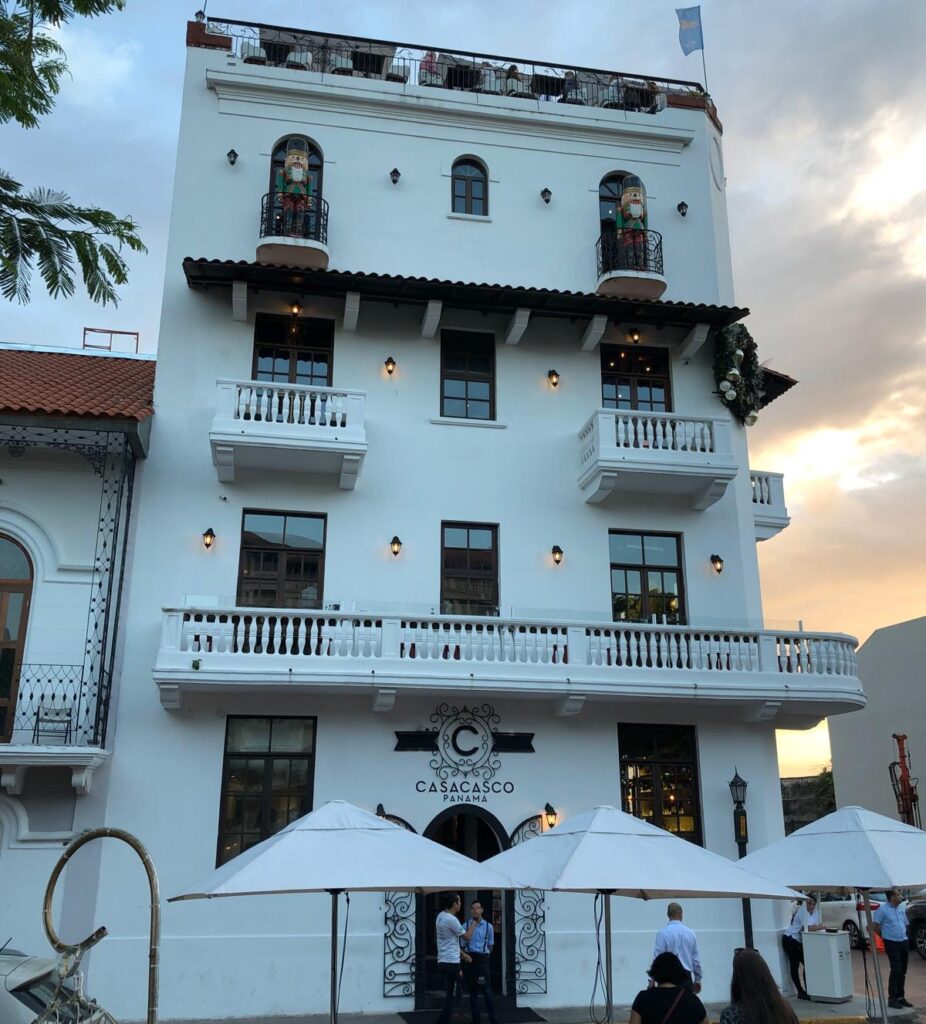 One of the coolest bars in Casco, Salvaje (which translates as Wild) is a local favourite not on the tourist map. It is located near the walled entrance to the old town. If you decide to walk to the roof of the lively bar five storeys up, you can meander through the crumbling, historic building with its wide, plant-filled balconies, reminiscent of Havana, Cuba. It’s noisy, so try not to get a table next to a loudspeaker pumping out local and international music. The cuisine is Japanese fusion which combines local Panamanian with Japanese ingredients. Watch the Panama City skyline disappear as the sun sets across the bay.

The hotel was named after Clementina Herrerra, an eccentric and successful female Panamanian entrepreneur in the 1950s. Ask for a refreshing Panamanian Mojito made with clementine juice, clementine segments and Seco, an alcohol distilled from sugar cane, lime juice and basil leaves. There’s also a popular Sunday brunch at Mahalo Restaurant next door, run by two Canadian sisters.

A small bar, with big views. Lazotea was apparently the first rooftop bar in Panama City to have a swimming pool you can actually swim in. It has one of the best rooftops in Casco, with views across the bay. Located near the entrance to Casco, it is at the top of the Hotel Casa Panama, which also houses Restaurante Santa Rita. The cuisine ranges from Central American to French, with a range of European dishes.

This unassuming, yet elegant and often overlooked little restaurant/bar is near the entrance to Casco and so close to the water, you can see the fishing boats of the Mercado de Marisco (fish market) coming in to shore for the night and watch the sun set over the bay. The sparkling little lights on the patio make the evening magical and the signature cocktail list and menu from the Capital Bistro Restaurant below ensure an unforgettable experience. 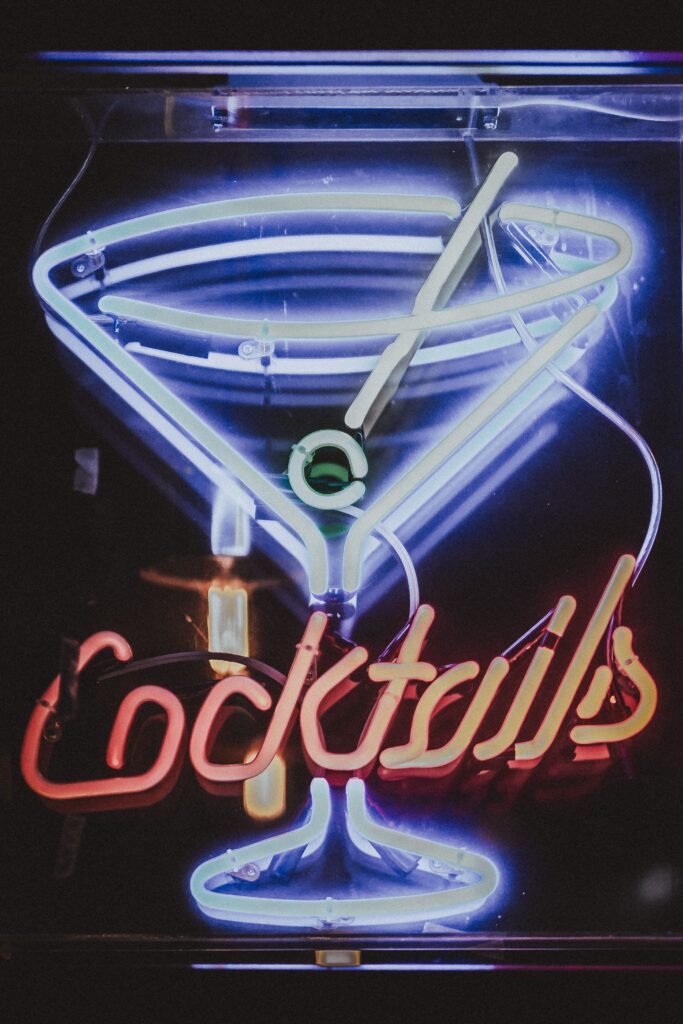 Diane Penwill is a Toronto-based writer and photographer whose work has been published in national newspapers and magazines. Diane has written for Taste&Travel since its inception and has visited Panama several times. She blogs at SavouryPlanet and can be followed on Instagram @dianepenwill.