Kogi
Getting in Gear: The truck that started it all hit the road in 2008 with a humble little Korean short rib taco that sparked a Twitter explosion in front of a nightclub in Hollywood full of hungry revellers. The unique fusion of Korean and Mexican ingredients and flavours, in turn, ignited the imaginations and taste buds, leading to long lines across Los Angeles through the magic of social media. More than ten years later, Kogi has the distinction of having covered streets from the South Bay to the San Fernando Valley, Inland Empire,Ventura and Santa Barbara. Signature Bites: World Famous Short Rib Taco, Kogi Dog, Kogi Kimchi Quesadilla, Pacman Burger, Sweet Chili Chicken Quesadilla.

Poutine Brothers
Getting in Gear: Chris and Matt Urakami developed an appreciation for poutine during the years they toured around Canada playing club hockey. After serving up a test run among friends and knew they had to put their corporate marketing and accounting jobs into park to launch the food truck. Signature Bites: Popular SoCal twists on Canada’s favourite comfort food (double-fried french fries with cheese curds and brown gravy) include a succulent beef short rib poutine, a spicy Indian variation with tikka masala chicken and updated Canadian smoked pork poutine. Vegan offerings (a must in L.A.) include a “Parmesan”-roasted cauliflower poutine topped with vegan gravy. Squeaky white cheddar cheese curds brought in from a dairy in Ellsworth, Wisconsin are prominently featured in all versions except the vegan offering.

Getting in Gear: As an offshoot of a nearly century-old family-owned Italian restaurant and pasta shop in Culver City, Pasta Sisters started out bringing authentic fresh pasta to local businesses for office lunches. However, since March, the food truck has worked with a frequently updated weekly schedule, targeting apartment complexes and residential areas, from Los Feliz and Koreatown to the east to the beach cities and the San Fernando Valley.  Guests can choose to either order and purchase their italian favourites at the truck or through the Best Food Truck ordering platform for pickup. Signature Bites: Handcrafted spaghetti, papardelle, tagliatelle and gnocchi with a choice of sauces (bolognese, tomato and basil, spicy arrabbiata, pesto alla Genovese, and black truffle butter); spezzatino con polenta (beef stew); meat lasagne; roasted organic salmon.

Getting in Gear: Based on a strong Sunday following, Belly Bombz transitioned from a tent at a Long Beach-area farmers’ market to its first gourmet food truck in September 2012. That first truck parked in the heart of the Cerritos area and spread its (famous, Korean-influenced) wings (as well as burgers, bowls and other comfort foods) to hungry patrons throughout L.A. and Orange County.
Signature Bites: Chicken wings offered in such preparations as Firecracker (sweet and hot Korean style), Spicy Garlic Parmesan, Bomb Dust (Memphis dry rub), Sriracha Lime and Soy Caramel (soy sauce and burnt sugar); Spicy KBBQ Pork Rice Bowl and Loaded Fries; KBBQ Short Rib Rice Bowl.

Getting in Gear: Shachar “Tony” Weiner set out as “the beast from the Middle East” to provide fans of Middle Eastern food, “an addiction that is good for you.” Signature Bites: The special Hummus Mach’lutta, smooth, velvety garbanzo bean dip topped with flavoured fava and garbanzo beans, a squeeze of house dressing, nutty tahini sauce, and a shower of chopped parsley; Hummus Shak’shuka, topped with egg cooked in red pepper, tomato sauce and loads of chopped parsley; Each plate is finished with puffy pita bread, sliced tomato, raw onion, green olives, pickles and pepperoncini.

Getting in Gear: Perry Santos and son Joe are Cuban-Americans and have been on the road selling their homeland’s most famous sandwich from a retooled trolley. The family’s Cubanos sandwich preparation is inspired by the long-cut variation from La Cochinita in New York City that Perry enjoyed as a kid. Signature Bites: The trolly is best known for the classic sandwich, crafted from slow-roasted pork, house-cured ham, Swiss cheese, spicy thin-sliced dill pickle, and mustard butter pressed on crispy Cuban baguette. Other favourites include the “Tampa Cuban,” adding in Genoa salami and the “Midnight Cuban,” a sweet Cuban roll stacked with pastrami and pineapple coleslaw on the side.

Getting in Gear: Emanuele Filiberto di Savoia’s grandfather was the last king of Italy, passing along to him the title, the Prince of Venice and an inspired idea for elevated food truck fare. In 2016, he launched a regal blue food truck with a mural of Venice and his favourite maxim, “Life is a Combination of Magic & Pasta.” Signature Bites: The impossibly good truck-made pasta is prepped in a mini-open concept kitchen aboard the truck and then served in equally irresistable boat-like containers with blue belts and gondola tails. The menu is constantly rotating and can include anything from traditional tomato-sauce topped favourites to papalina (a ridged al dente ziti tossed with peas, cream, Parmesan cheese, and ham) and octopus pasta (ridged shells stained black with squid ink, piled with octopus ragu and tomatoes). 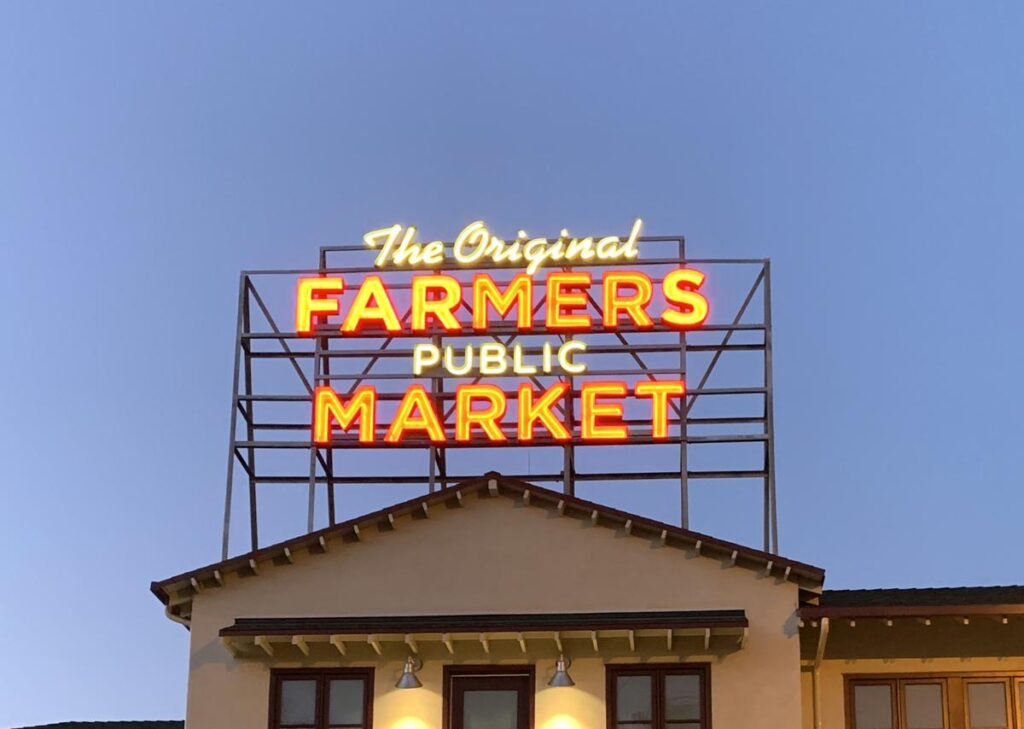 Still (Farm) Fresh After All These Years

As the Original Farmers’ Market in Hollywood has served the community and visitors since 1934, some argue it was the forerunner to today’s rolling restaurants. While it has evolved through the decades to suit the broadening palates of Angelinos, its businesses are exceptionally well prepared to adapt to socially safe dining as it has long been a hub for al fresco dining and take-out.

Breakfast institution Du-par’s Restaurant and Bakery, for example, recently reinstated its classic carhop service. Customers order by phone in the Farmers Market parking lot and provide the make and model of their car for Du-par’s employees to personally deliver the food. Kaylin & Hobbs, a New York-style pickle purveyor with flavours like spicy dill, full sour, mustard, and jalapeño that opened right before the pandemic, found creative ways to reach customers teaming up with market stalwart Magee’s Kitchen and staging “pickle pop-ups” in the Market Plaza near the parking lot to get more eyes on their product.

Other beloved shops and restaurants still feeding shoppers’ curiosity or sense of nostalgia at press time include include T&Y Bakery, The Gumbo Pot, Pampas Grill, Nonna’s Empanadas, Patsy’s Pizza, Fritzi Coop (steered by top L.A. chef Neal Fraser), a branch of Trejo’s Tacos, Singapore’s Banana Leaf and China Depot. Market Tavern, which boldly opened in 2020 even with covid-19 precautions in place, is stirring up excitement by fusing traditional British pub recipes with California ingredients. One can enjoy the signature Fish ‘N Chips, savoury hand pies, bangers and mash and drunken short ribs on the patio with a view of a television projecting both major American team sports tournaments and Premier League soccer.