What is Canadian cuisine?

It’s a question posed by Estelle Blanchette to the visitors gathered at two metre intervals on the lawn of the Tourist Information Centre in Jasper, Alberta. We’ve arrived in our covid cohort ‘bubbles’ for a Downtown Foodie Tour of this Rocky Mountain town, and the responses that emerge from our face masks cover all those options and more.

Perhaps the answer requires the objectivity of an outsider, an international visitor’s perspective. But in this year of closed borders, the dozen of us are all Canadian (though we discover that collectively we represent the cultures of India, the Philippines, Eastern Europe, the Netherlands, and the UK). While we can’t agree on a particular dish or food category, we do come to some kind of consensus: it depends. On where in this country the kitchen sits. On how local food sources have intersected with local culture and what culinary influences have migrated with the hands doing the cooking.

Blanchette seems to like the way we’re thinking. As we head off to discover what Jasper’s interpretation of Canadian cuisine might be, she fills us in on its historical context. 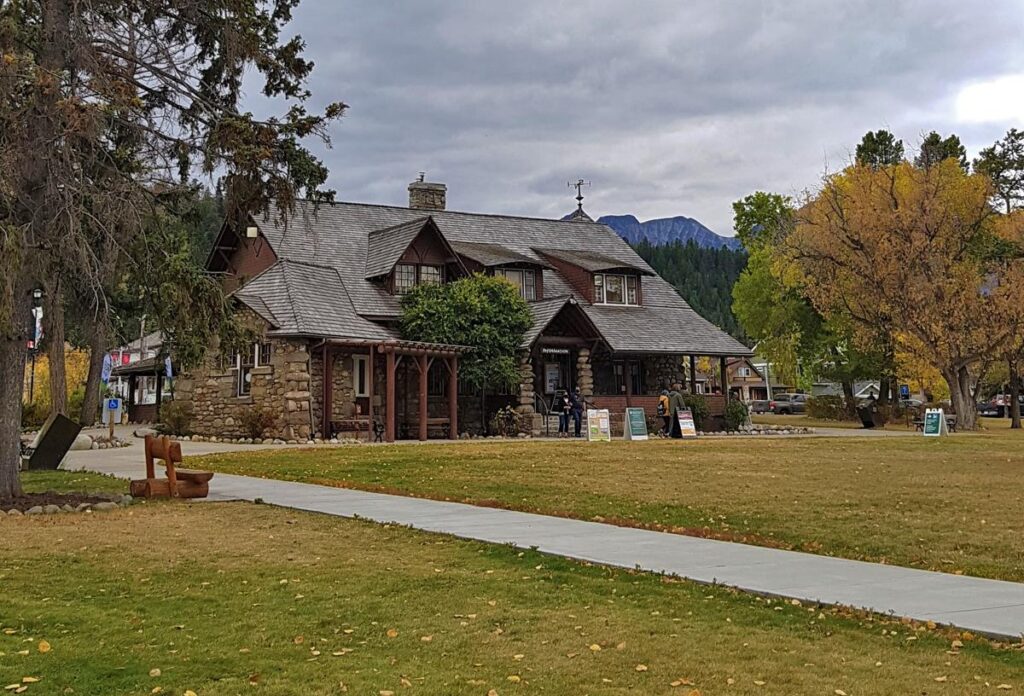 Like most places in Canada, the culinary culture in this region is marked by migration. Indigenous peoples from the Sekani, Dane-zaa, Tsuut’ina, and Secwepemc nations came to hunt elk here some 10,000 years ago. They were followed by the Cree and the Stoney-Nakoda, and in the early 19th century, by the first European explorers looking for a route through the Rockies to facilitate the fur trade. Jasper House was established to provision those traders. Metis families began to farm the valleys. The transcontinental railways that were to follow brought an influx of settlers and travellers in search of adventure or prosperity — or to explore the 13,000 square kilometres set aside in 1907 as a national park.

The visitors haven’t stopped: some 2.5 million of them arrive annually to hike the park’s canyons and glacier-fringed mountains, ski its slopes and soak in its hot springs, and observe the abundant wildlife (including elk, wolves, woodland caribou, and bears). Residents of Jasper town now number some 4500, fortified by seasonal workers who support the hospitality trade while indulging their own passions for outdoor adventure. Countless are the anecdotes of those who arrived for a season and stayed for a decade or a lifetime. 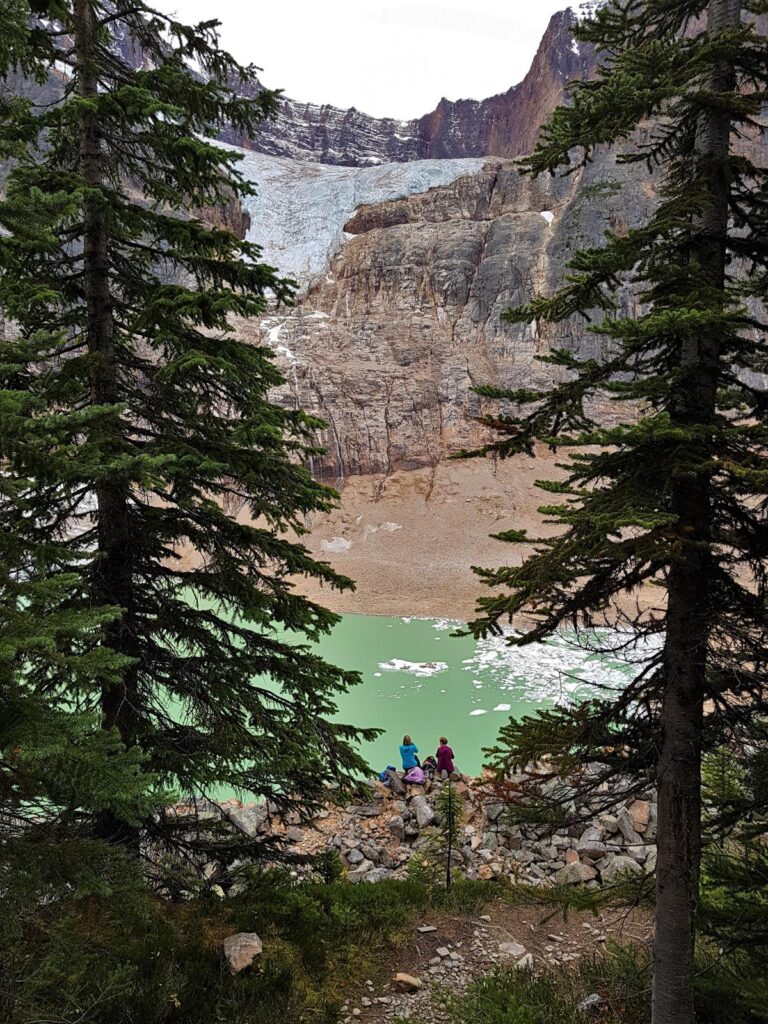 Case in point is Blanchette herself, who stumbled across Jasper in 1998 on a hitchhiking trip across Canada from her hometown in Quebec. The place got under her skin and stayed there, even as she returned home to finish a degree in Fine Arts. After graduation, she took a seasonal job in Jasper — and never left.

Blanchette’s entry-level positions gave way to hotel management roles, and by 2012, she was business development and distribution manager of the local tourism bureau. A perennial food lover who was well familiar with Jasper’s culinary scene, she identified an unfilled niche in the town’s tourist offerings. In 2018 she made the entrepreneurial leap to establish Jasper Food Tours. 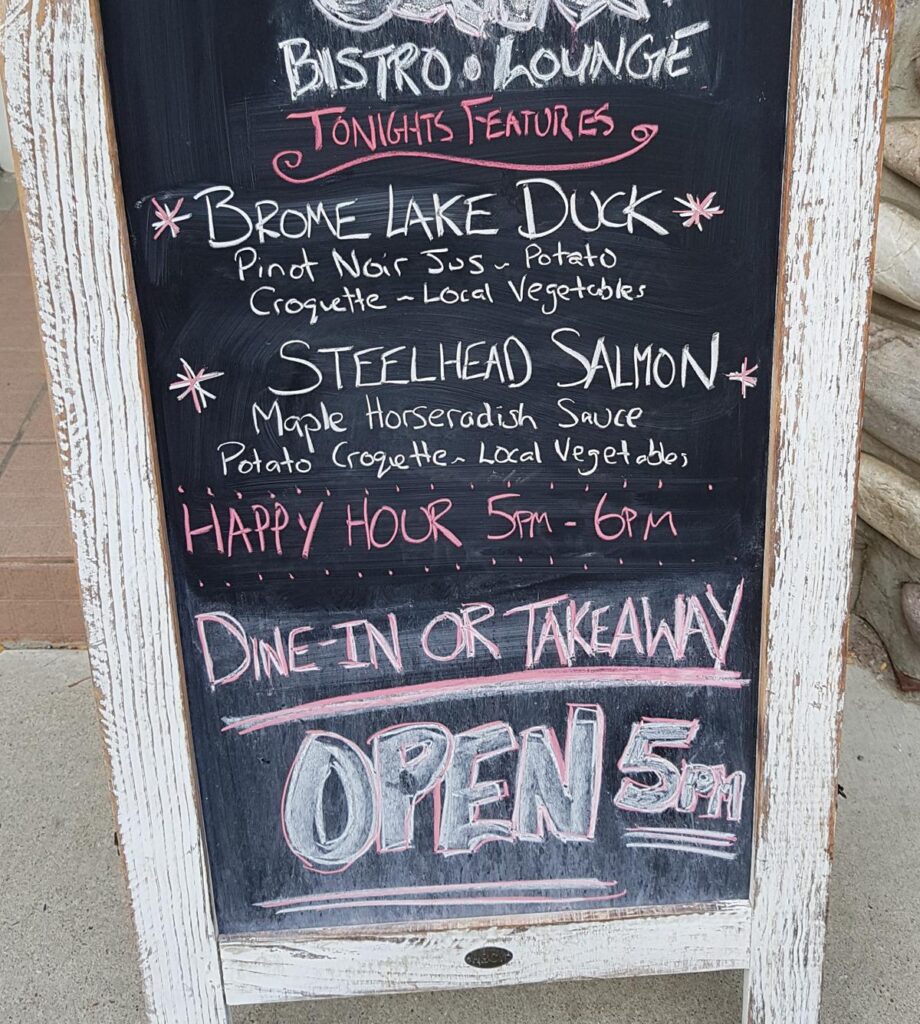 Now she leads us past the brimming flowerboxes of cafe patios to our first tasting stop. In the spirit of adventure, Blanchette doesn’t reveal our destination until we arrive on its stoop — and she swears us to secrecy about the four venues we visit. But as the afternoon unfolds, her choices reflect a dedication to food quality, and a close acquaintance with the people who’ve been providing food here for a long time and doing it well.

There’s a focus on Canadian cuisine in its multiple dimensions, with a nod to the Greek and Italian and French origins of the town’s long-time residents. We amble from a brewpub to a Boho-chic hole-in-the-wall, and from a neighbourly beer hall to an upscale bistro that (in pre-covid times) hosts live music from all over the globe. The generous plates highlight local food — including game, farmers’ market produce, and Alberta-grown pulses — paired with Canadian wines and Rocky Mountain-brewed craft beer. 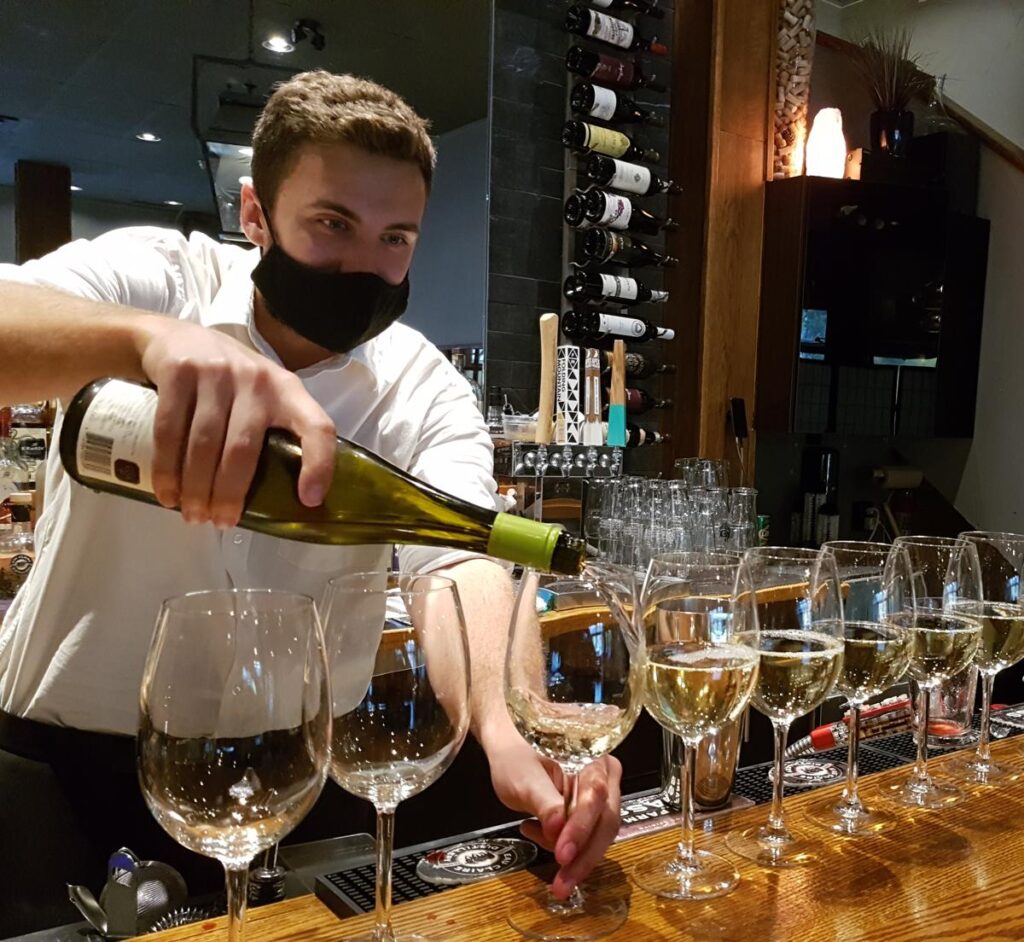 Between tasting stops, Blanchette shares her deep local knowledge. We learn of the karst topography that underlies Medicine Lake’s mysterious annual disappearance. And we learn, too, the significance of liquor shots placed on the chair rail of a popular tavern beneath photos of local adventurers.

We pause at a totem pole whose turquoise-rimmed eyes glow beneath the September sky. Called ‘Two Brothers,’ it tells the legend of a rare connection between these mountains and the coastal indigenous peoples. The pole was, in fact, carved by two brothers from the Haida nation and built to replace the 19th century ‘Raven’ pole that was repatriated from Jasper to Haida Gwaii in 2010.

A shiny steam locomotive stands near the train station in tribute to the town’s extensive railroad history. Blanchette notes that Jasper was once a stop on Canada’s ‘Silk Road,’ when trains loaded with raw silk from Asia raced from the port of Vancouver to New York’s National Silk Exchange through the early decades of the 20th century. In a sad convergence of the historical and the contemporary, Blanchette reports that Harry Home, the retired railway engineer and driving force behind this lovingly restored engine, died from covid-related complications of a longstanding respiratory condition early in the pandemic. 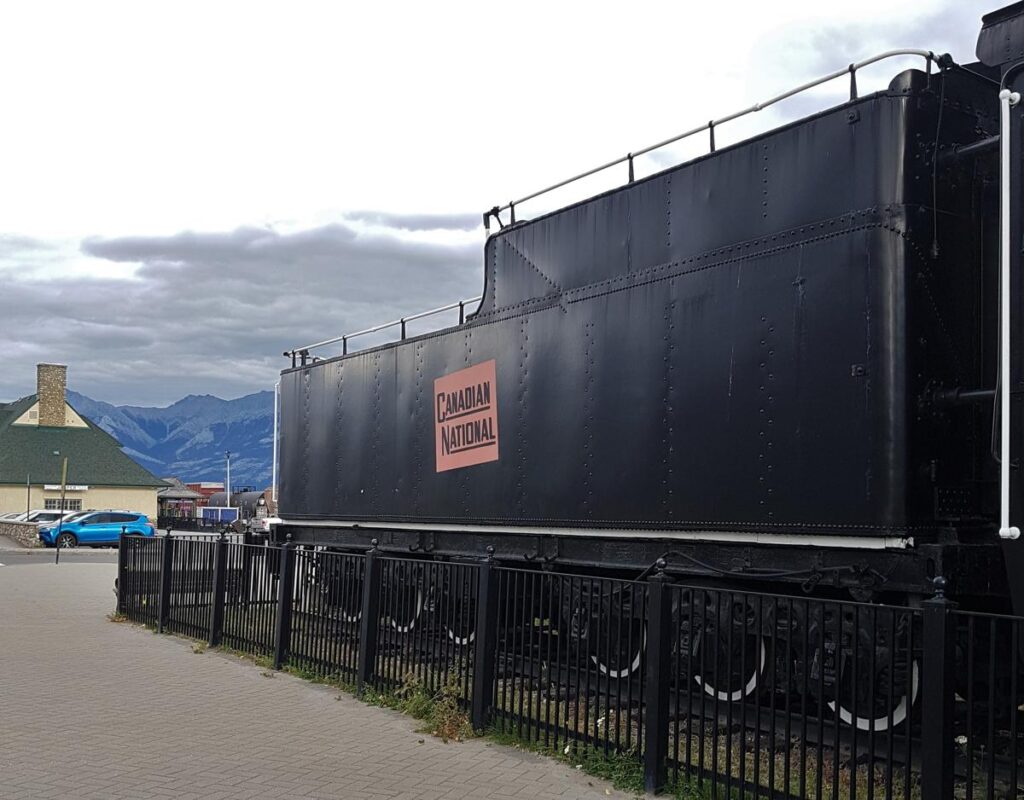 Behind the train tracks, the river is a remarkable shade of aquamarine, and beyond it, a wide swath of copper slopes stands in relief against golden aspens and green spruce. A guest asks what it is.

“Pine beetles,” says Blanchette — a blight stimulated by a lethal combination of over-mature forests and climate change. As we move on toward our final tasting destination, she describes the measures that Jasper citizens are pursuing to avert the resulting fire threat. It’s clear that we’re getting an insider’s insight into the concerns and passions of this intimate community. Beyond the food and drink, the tour has evolved into an afternoon of thoughtful conversation and camaraderie, an authentic engagement with visitors that bridges the two-metre gap between us.

Blanchette partners with a number of local businesses to create packages and events that shift with the seasons. Guests can pair the food tour with ice canyon walks or wildlife viewing tours or a ride up the SkyTram for 360-degree views of six mountain ranges. During Jasper’s annual Dark Sky Festival, she offers a cooking class under the stars as well as a blindfolded Dinner in the Dark. Valentine’s Day brings Gastrodisiac, a progressive dinner for couples focused on all foods aphrodisiac.

Since 2019, Blanchette’s passion for both food and backcountry hiking have converged in her company’s Peak-Nic experience: an intermediate hike up a mountain peak for a hands-on cooking lesson using dehydrated and lightweight non-perishables to craft gourmet cuisine. A compilation of her backcountry recipes and techniques is currently under development, evocatively-titled The Backcountry Cookbook… So You Can Pack More Wine. You’ll find her recipe for campfire crabcakes here. 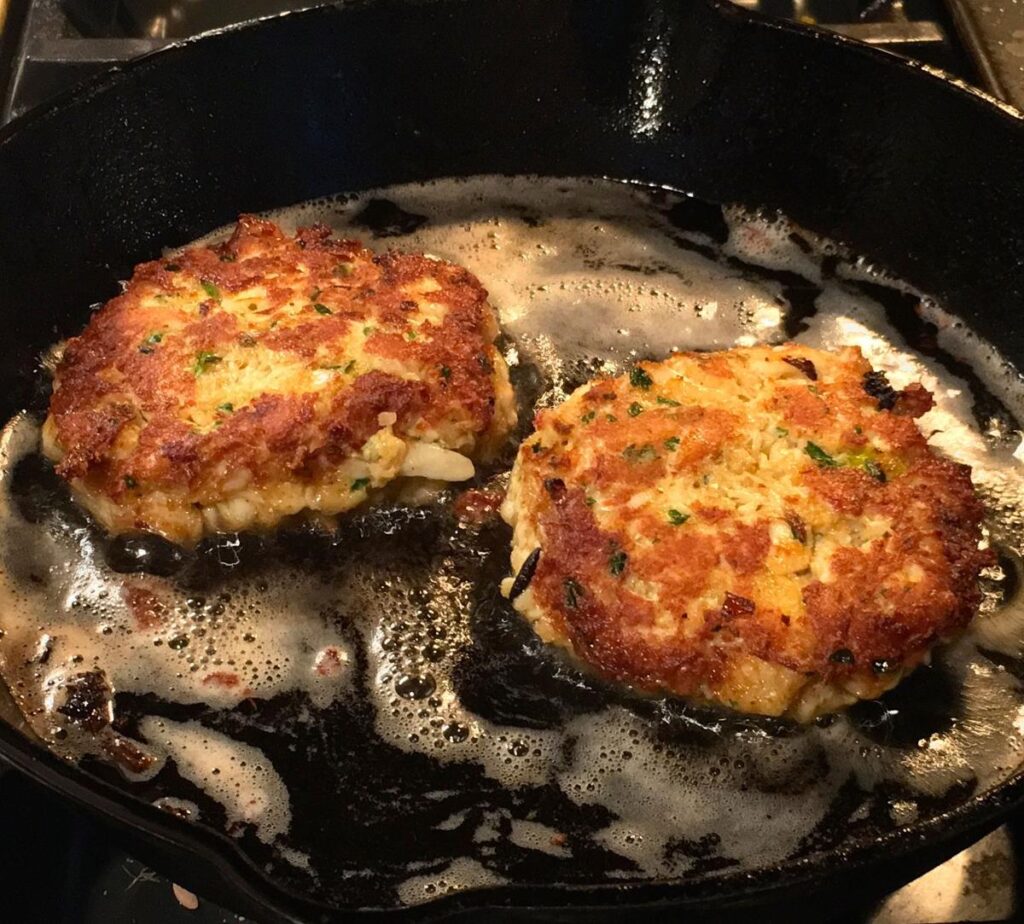 In 2021, watch for Bites on E-Bikes: tours to exceptional eateries beyond the fringe of town that encompass some of Jasper’s historic lodges, canyons, lakes, and beaches.

CATHERINE VAN BRUNSCHOT is a Calgary-based food and travel writer who contributes regularly to TASTE & TRAVEL magazine. You can read more of her work at www.catherinevanbrunschot.com