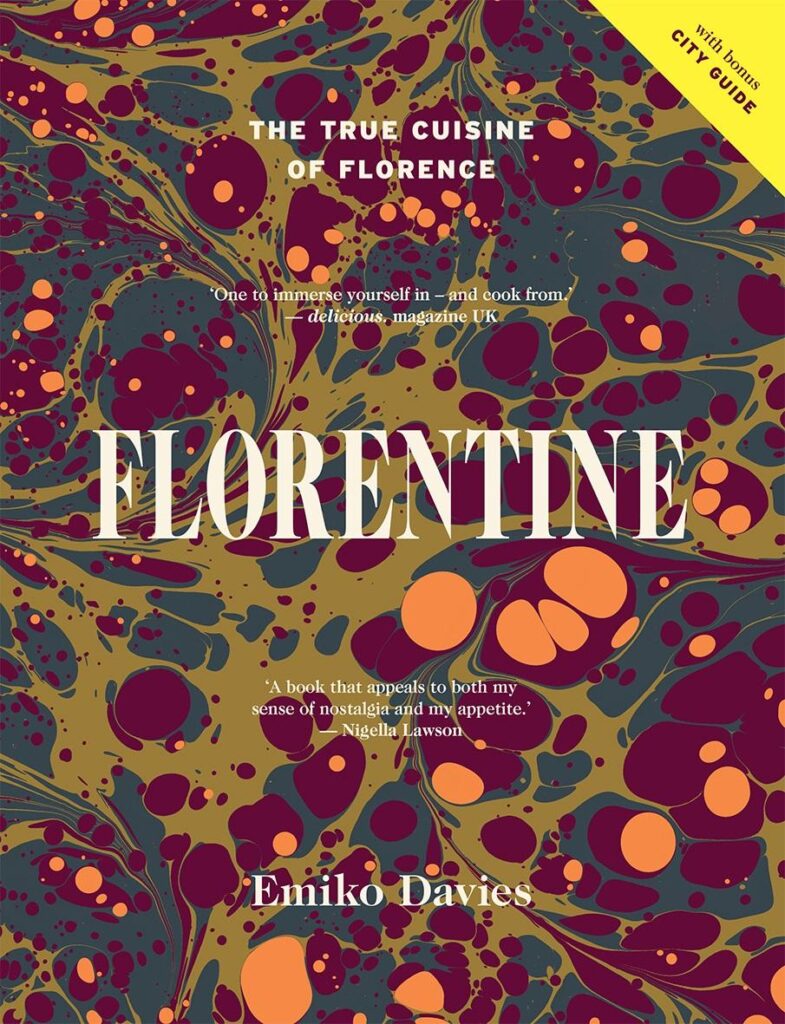 nyone familiar with Emiko Davies’ books Aquacotta and Tortellini at Midnight would be excited by the arrival of another missive from such an engaging writer. But Florentine is not a new title, it is a reissue of Davies’ first book, now with the addition of a curated City Guide.

Davies first went to Florence in her twenties as a student, to study book conservation and art restoration. There she met the man who would become her husband and where she has lived, on and off, ever since. Her exploration of the culinary culture of this ancient Tuscan city led initially to a blog and ultimately to this book.

I received a copy of Florentine when it was first published in 2016 and read it with pleasure but I didn’t cook from it. This is one of the unfortunate evils of having too many cookbooks. I love them all but even granted a multitude of lifetimes, I would not be able to cook every recipe that catches my eye.

So when Florentine came around for a second time, I decided to jump right in.

That Davies (who is Australian) was living in Canberra while writing Florentine, is to our benefit. She wanted to recreate quintessential Italian dishes as authentically as possible using ingredients she could find in Australia. Which means that other people living outside of Italy (you and I) can do the same.

In her well researched Introduction, Davies traces the development of Florentine cuisine from medieval times to the present, noting that many dishes have remained largely unchanged since the Renaissance or even earlier. Medieval necessities of creating nourishing dishes from a limited range of ingredients and letting nothing go to waste have become cultural habits that persist until today. She describes Florentine cuisine as “earthy and rustic, at times even austere” but notes too that Florentines are masters of working with simple ingredients and elevating them to new heights.

The book is divided into chapters descriptive of the places where people in Florence typically shop and eat. Bakers will find much sweet and savoury inspiration in La Pasticceria (the pastry shop) and Il Forno (the bakery) with recipes for cakes, tarts, puddings, pastries and breads, including a delicious-looking grape focaccia and a beautiful yeasted cake decorated with a Florentine fleur-de-lis. Il Mercato (the market) describes the many creative ways Florentines make use of fresh seasonal produce, while La Trattoria is focused on the home-style dishes – mainly soups and various forms of pasta — that are served in casual eateries. Il Macellaio (the butcher) is devoted to meat, poultry and game cookery. Finally In Giro (out and about) brings us crostini, panini and other street food snacks.

With a springtime hankering for fresh veggies, I homed in on Il Mercato. None of the recipes I tried were complicated but the results were impressive.

First up, Fagiolini alla Fiorentina (Florentine-style green beans). The beans are cooked low and slow, simmering in a sauce of canned tomatoes and red onion, seasoned with garlic and fennel seeds. The long cooking time allows the sauce to reduce and its flavours to meld, while the beans become softly tender and sweet. I learned to appreciate stewed green beans when I lived in the southern United States. I also liked them, very much, alla Fiorentina.

In Piselli alla Fiorentina garden peas receive a similar slow treatment. Peas (fresh or frozen) are cooked in water flavoured with garlic, olive oil and pancetta or alternatively, prosciutto. The salty meat gives up its flavour to the broth, which is served along with the peas and is an essential component of the dish. I was surprised by how profoundly this simple treatment transformed a humble bag of frozen peas (and turned a pea-loathing dinner companion into a convert). As a side dish, Florence-style peas would add a stylish touch to the simplest supper of grilled fish, chicken or meat.

Patate alla Contadina (farmer-style potatoes) is another side dish I am happy to have added to my repertoire. You could think of this as a mild-mannered sibling of the Spanish Patatas Bravas. Boiled (or leftover) potatoes are fried in olive oil with garlic, rosemary and sage until crispy, then doused in a sauce of canned tomatoes. Simple, and very tasty.

For Frittata di Finocchi (Fennel Frittata) the vegetable is stewed in a little olive oil and bound with just four eggs. The result is much more fennel-y than eggy and surprisingly delicious for a dish with so few components. I also learned that there are male and female fennel bulbs and that the male is both rounder and sweeter than the female!

The only recipe in this chapter that didn’t immediately impress was a tuna and white bean salad that sounded yummy and looked beautiful on the page but failed to deliver on flavour. Even though I used a good quality canned tuna and a fruity extra-virgin olive oil, the dish was lackluster. It took a good glug more of olive oil and a splash of sherry vinegar to lift it out of the doldrums. I did use canned beans, as Davies says she often does if in a hurry, but perhaps the more toothsome texture of beans cooked from dry would have helped. I did, however, learn a nifty trick from this recipe, to use boiling water, not cold, to soak raw onion and mute its flavour. The onion retains its crispness but the heat deactivates the enzyme that gives rise to its characteristic bite.

Il Mercato also contains an essay, Catherine de’ Medici, a Florentine in Paris, which explains the influence that this daughter of Lorenzo the Magnificent had upon French cuisine after her marriage (at 14) to the King of France. This and other essays conveying the history and culinary evolution of Florence, along with detailed recipe headnotes, make excellent reading as well as placing the dishes in context.

From La Trattoria I made Pappa all Pomodoro (tomato and bread soup), a classic Tuscan recipe designed to make use of stale bread. The dish, Davies explains, harks back to medieval times, when it consisted of little more than bread, water and garlic. With the addition of olive oil, tomato, white wine and vegetable stock, the rock-hard baguette languishing on my counter was transformed into a comforting and tasty mush.

And so to Il Macellaio, the butcher.

Crostini di Fegotini (crostini with chicken liver pâté) according to Davies are the definitive Tuscan antipasto, “rustic, tasty, cheap and sensible.” Let me warn you, they are also very potent. With just three tablespoons of fat (a mix of olive oil and butter) and a splash of wine added to 500 grams of liver, this is a far cry from the classic French-style pâté which typically tempers the distinctive tang of offal with an equal (or even greater) amount of fat. Crostini di fegotini are bold little bites, best paired, says Davies, with other strongly flavoured antipasti such as salumi and Pecorino cheese. I’d add a punchy Tuscan red to that recommendation.

I’ve been reducing my beef consumption because of its heavy environmental impact. When I do indulge in beef, I want it to be a treat. Davies’ elegantly simple recipe for Tagliata di Manzo (seared and sliced steak) was the perfect treatment for the (humanely raised) bone-in ribeye steak that I paid top dollar for.

In a classic Tuscan style, the meat is seasoned with salt and basted with rosemary-infused olive oil before being seared in a blistering hot pan. After resting in a bath of the same scented oil, the steak is sliced and simply garnished with shaved parmesan and a handful of arugula. It was a lip-smacking endorsement of the less-is-more school of cooking and a fine finale to my week of cooking from Florentine.

Like Davies, I first went to Florence in my twenties but my memory of that time has faded with the passing years. Much of the enjoyment in reading Florentine comes from the feeling that Davies is a friend who is showing you around her city, sharing her love for and deep knowledge of Florence, its people and their food. Her evocative photos, some in black and white, capture the particular appeal of quotidian life in this ancient and storied city, while her conversational prose conveys its history and unique character with both intimacy and authority.

I am longing for the day when we can travel again and Davies has rekindled my desire to walk the narrow streets of Florence again. And if this Tuscan treasure isn’t on your wish list yet, take a dip into Florentine and I am sure it will be. And when you or I arrive, with a copy of Davies’ book in our suitcase, we’ll have the benefit of her bonus City Guide filled with tips on how and where to eat, drink and shop in Florence.