Auckland is New Zealand’s biggest city, a vibrant multicultural metropolis with a stunning harbour setting and a future-chasing attitude. But hop on a ferry for a 10-minute ride across the water and you’ll be enveloped by the slowed-down charm of Devonport, a Victorian village that delivers history and a laid-back modern lifestyle in equal measure.

Devonport was one of Auckland’s earliest European settlements and has retained some of the best streetscapes of 19th-century commercial and residential buildings in New Zealand. Browsing the boutiques, antiquarian book stores, galleries and gift shops along Victoria Street, enjoying village cafes, pubs and restaurants, and admiring the elegant homes and former boarding houses along the waterfront King Edward Parade, is a favourite way for Aucklanders to spend a relaxing weekend day away from the city. Local residents get to enjoy the peaceful neighbourhood vibe all week long. 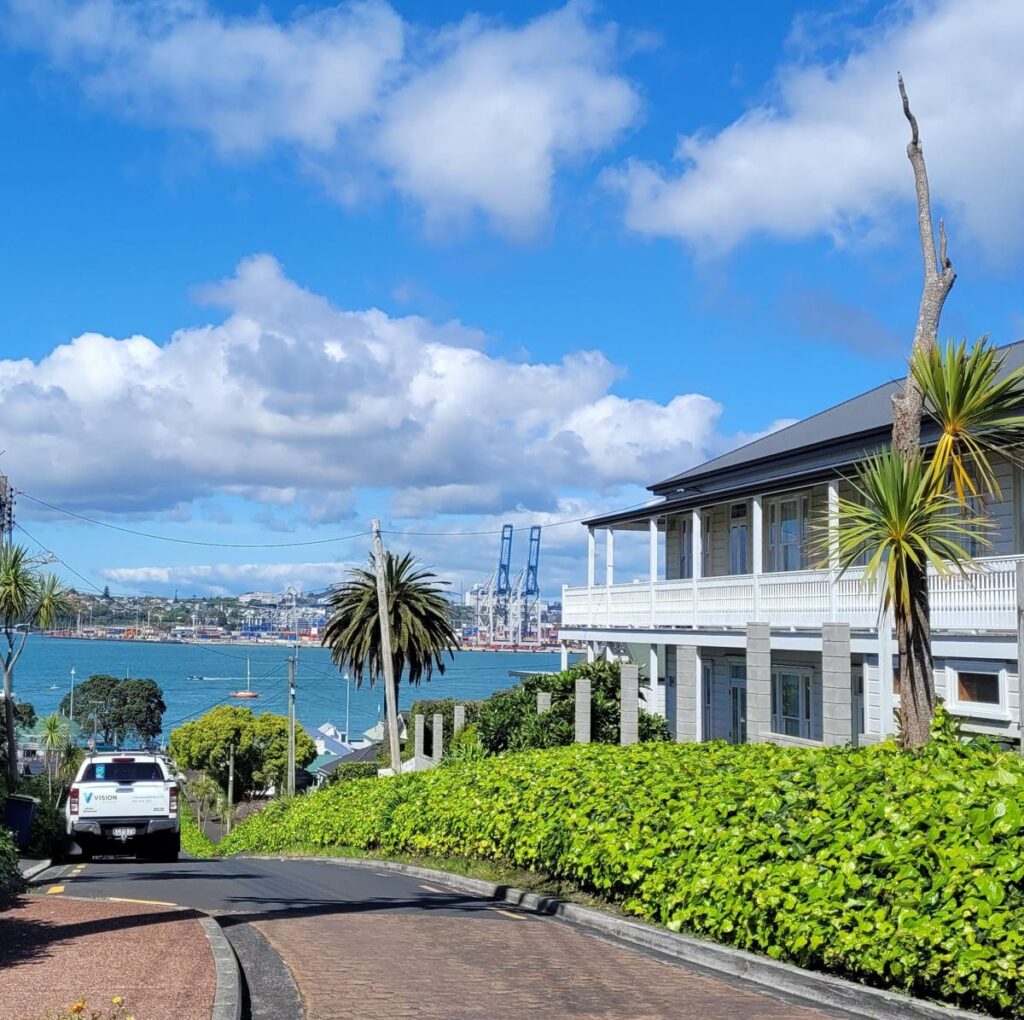 Long before European settlement the area was an important site for the Māori because of its rich volcanic soils and bountiful fishing grounds. They built a pā (fortified village) on Takarunga, the volcano now known as Mt Victoria. The Auckland Volcanic Field has no less than 53 volcanic centres, all dormant. While some mounds have been quarried away, others are green cones that rise incongruously from the urban sprawl – a unique feature of the Auckland landscape.

The first European settlers in Devonport were homesteaders who kept farms and vegetable gardens. In the 1840s repair depots for naval vessels were established along with chandleries and storehouses. In 1860s everything changed, with the introduction of a ferry service connecting the hamlet to the growing city of Auckland.

Take the ferry today and the first thing you’ll see when you leave Devonport Wharf is The Esplanade Hotel, opened in 1903 and described at the time as “a very fine building …  as sumptuously furnished as it is imposingly built. An air of luxury and comfort pervades the whole building.” That was no longer the case by the time of the hotel’s centenary, when it had become run-down and was partly shuttered. Renovations began in 2002 and in 2014 new owners completed a major revamp. With its waterfront position and Edwardian elegance, it is once again an iconic Devonport landmark. 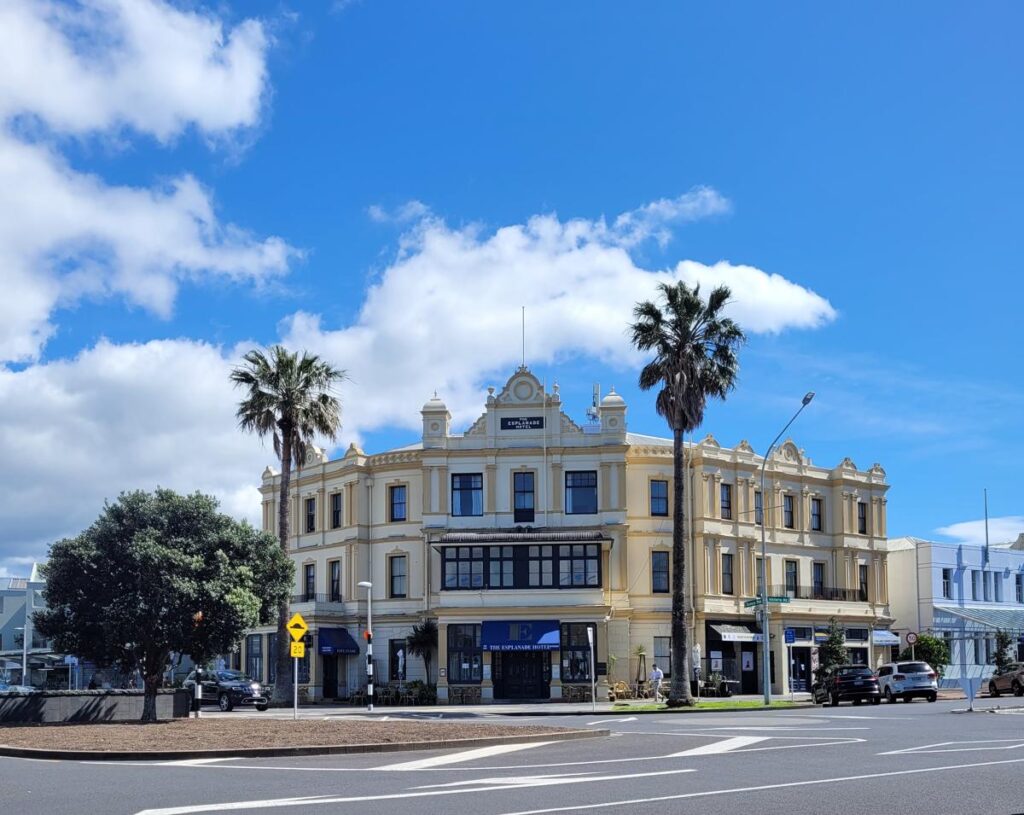 Diners in The Esplanade Hotel, and officers at the Naval Base, could expect the finest fare available in the colony. The menu on a troop ship sailing in 1915 offered no less than 15 courses, from Consommé a la Crecy and Lievre Hare with Champignons, to Roast Ribs of Beef with Washington Pudding, Boiled Fowl with Egg Sauce, and Roast Stuffed Filet of Veal with Lemon Sauce, cabbage, pumpkin and potatoes. To finish off, after apple tart, Berkley Pudding or chocolate cream, came apples and mandarins, assorted nuts, Egyptian figs, cheese and biscuits. Numerous complaints have been recorded about the food enlisted men received.

On shore, most European settlers relied on the produce of their gardens, bolstered with a little meat and dishes made from dry goods. Ironically, since they were surrounded by waters teaming with marine life, they disdained fish as food for the poor, preferring traditional roast dinners with English vegetables, potatoes and gravy and other ‘plain fare’.

Across the road from The Esplanade Hotel, in the park beside the new Devonport Public Library, stands Old Albert, a massive Moreton Bay Fig Tree (also known as Australian Banyan) planted as a seed in 1883. Kids play in hidey-holes among its buttressed roots, while its 45-metre canopy of glossy leaves forms a parasol over picnickers in the park. 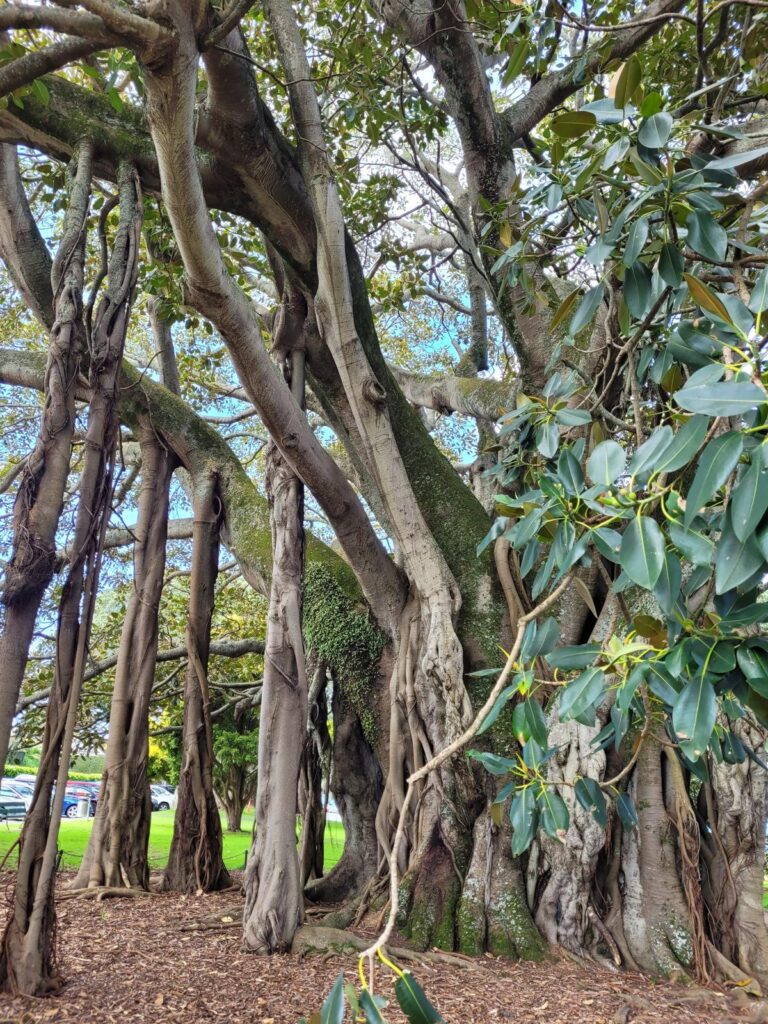 Another local landmark is Devonport Chocolates, reason enough for many to make the trip across the water from Auckland. Handmade, European-style chocolates arrayed like baubles in jewelry boxes, and bars encased in beautiful native bird- and Kiwiana-themed wrappers make unique gifts or indulgent personal treats. The best seller is a bar made with salt from the Hauraki Gulf, gateway to Auckland Harbour. Other ingredients that give these chocolates a unique Pasifika identity include Manuka honey, kiwifruit, passionfruit, feijoa and other local fruits.

Music buffs may be interested to know that the Grammy-winning singer Lorde grew up in Devonport, as did Sister Mary Leo, the nun who trained opera diva Dame Kiri te Kanawa. I discovered indie-Americana songwriter Brett Dennan on the soundtrack in Bookmark, a second hand and antiquarian bookstore on Victoria Street. Founded by an ex Royal Marine and a librarian, the cavernous store has over 20,000 books in stock and is furnished with sofas and comfy chairs where you can contemplate the wealth of literature. Culinarians should seek out Martin, the staff expert with global knowledge of chefs and cooking. 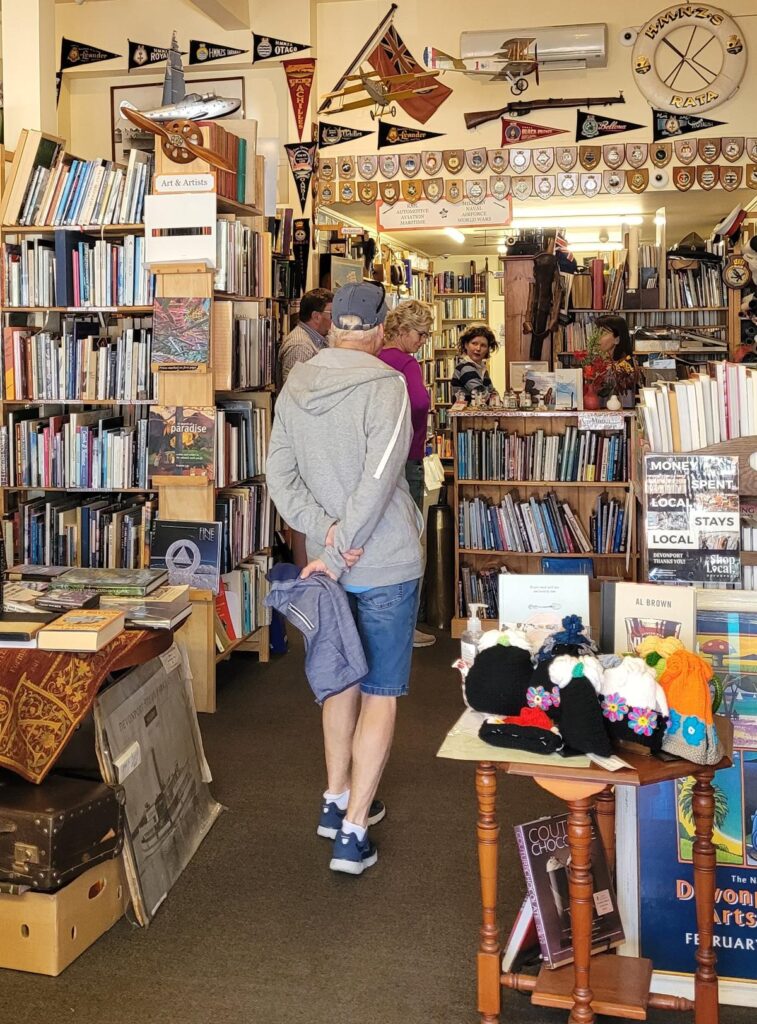 There are plenty of places in Devonport to enjoy New Zealand cafe culture but Stone Oven Bakery gets extra points for its location – in the former Devonport Automatic Telephone Exchange (built in 1922). According to a man who had a job there in the 1950s, the phones worked fine as long as the undersea cable from Auckland didn’t get damaged by a ship dragging its anchor. If it did, he had to hop on his bicycle and ride down to the harbour to get the spare cable hooked up.

Fast forward to today and Stone Oven’s bright airy space with high ceilings and polished wooden floors boasts an extensive blackboard menu of freshly made eats, from breakfast Benny to local seafood with a glass of wine. Once a part of Stone Oven Bakery and now located across the road, baked@devonport is the place to pick up an artisan loaf of bread, a scroll bun filled with cheese and vegemite, a doughnut oozing jam and cream, or a classic New Zealand meat pie. 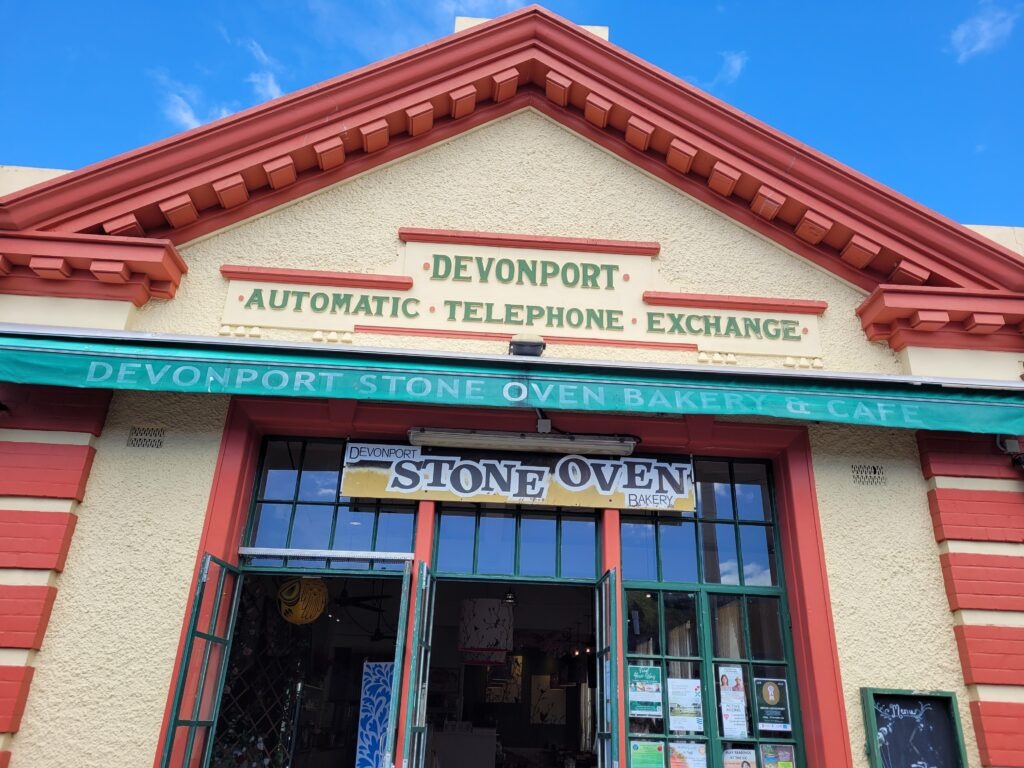 Another historic building enjoying a change of vocation is the former Bank of New Zealand, built in 1925. This handsome Classical facade now belongs to The Patriot, an English-themed pub with a raft of craft beers, outdoor seating, and a kicked-up gastro-pub menu. Sidewalk tables and a Mediterranean menu are the draw at Mānuka Café and Restaurant, housed in a two-storey corner building that was once the Johnston & Noble grocery store. The old Devonport Post Office building has also recently been restored and houses eight businesses, including So French Home, a Francophile emporium filled with housewares, perfumes, French milled soaps and the like. The adjoining cafe serves up coffee, crepes, sandwiches and pastries. Further along Victoria Road, Corelli’s Cafe is a local favourite for its affordable, homemade food and genuinely friendly staff. 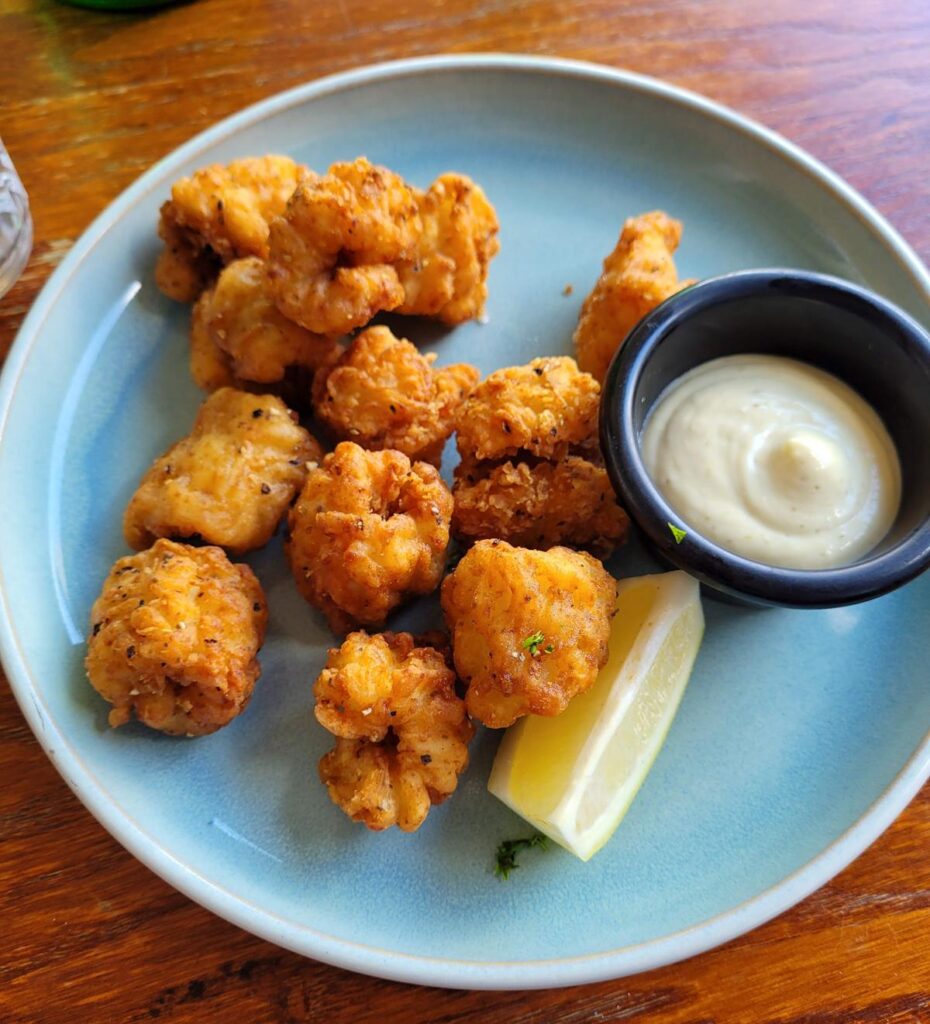 The oldest existing house in Devonport, at 24 Victoria Road, was built in 1864. Carefully restored by a local couple, it is now home to Signal Hill, a modern bar and restaurant with casual outdoor dining as well as a formal indoor dining room with original kauri wood floors. The menu features locally raised lamb and beef, line-caught fish and New Zealand’s superb cold-water oysters. New Zealand is surrounded by oceans that yield some of the finest fish and seafood in the world. Bluff Oysters, from the South Island, can be as large as the palm of your hand. With a glass of flinty sauvignon blanc, or a creamy chardonnay, “bluffies” are rightfully regarded by locals as little parcels of heaven. 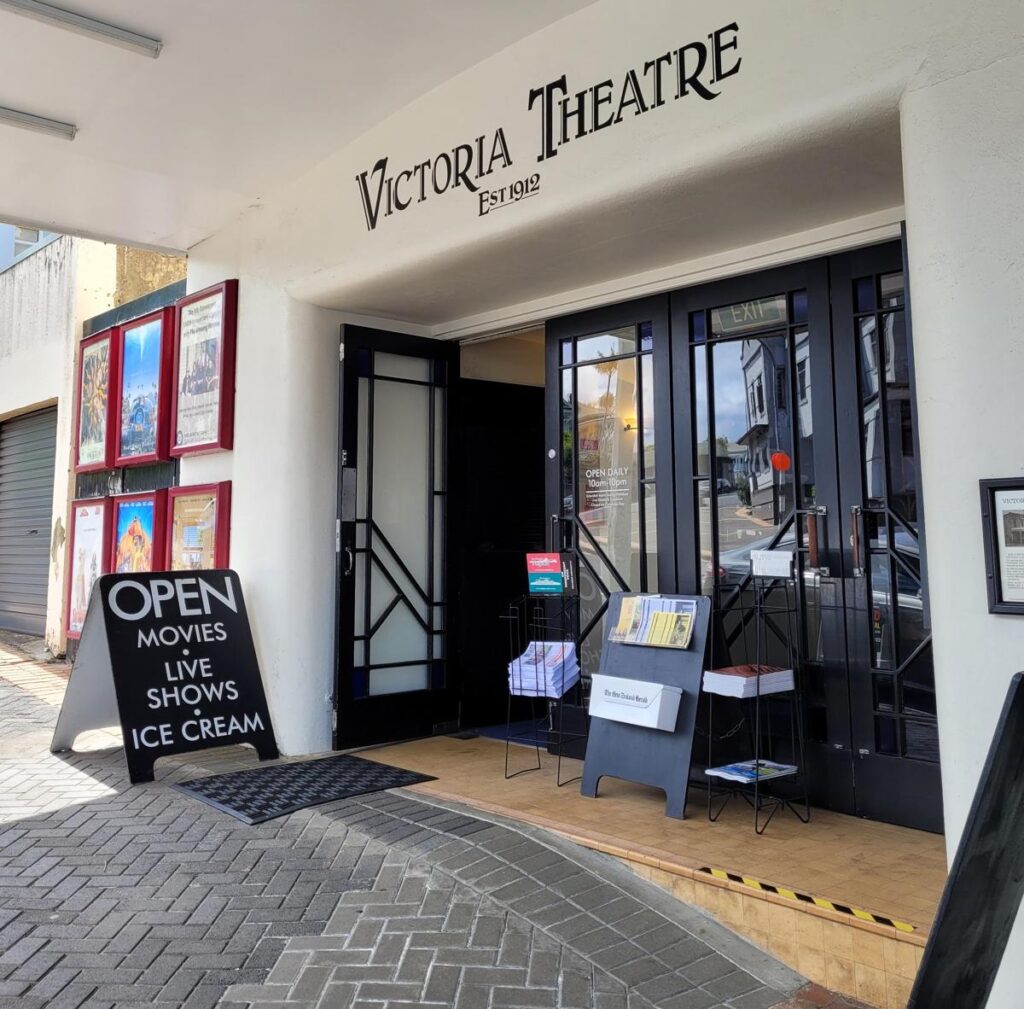 At the top of Victoria Road you’ll find The Victoria Picture Palace and Theatre, the oldest purpose-built cinema building still standing in the Southern hemisphere. It was constructed in 1912 by an American couple whose pet monkeys were sometimes able to escape and create havoc in the street. Today the restored Victoria still functions as a cinema and live performance space.

The Devonport Museum, housed in part of an early Presbyterian Church, is a great place to see Devonport’s history brought to life in a wide-ranging collection of artefacts and exhibits. My favourite is the reconstruction of a settler’s cottage parlour with table set for tea – Victorian dollhouse charm writ large. The Torpedo Bay Museum, located in a modern building on the waterfront, chronicles the presence of the New Zealand Navy in Devonport, its HQ from 1909 to the present. In 1980 Devonport made international news by declaring itself a Nuclear-Free Zone, banning nuclear-powered ships from docking at the base. 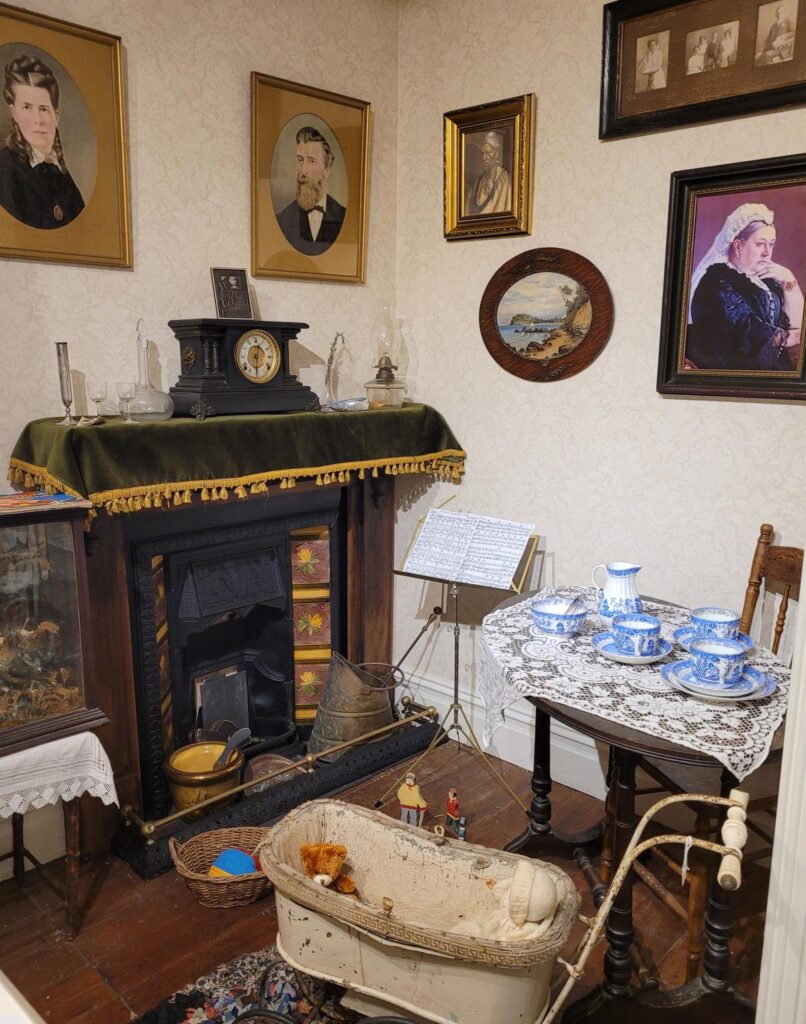 History buffs can also explore gun emplacements and tunnels on North Head, built to defend Auckland from feared Russian invasion in the late 1800s. The headland is also a fantastic vantage point to watch cruise ship arrivals and other comings and goings on the harbour. Local yacht races take place regularly in Auckland and ‘The City of Sails’ is also host to international yachting events such as the America’s Cup and the Whitbread Round the World race.

The keeping of pigs is no longer allowed in Devonport but mixed bathing is. With its sandy beach, laid-back outdoor lifestyle and many tangible links to New Zealand’s history, the seaside village with a view of the city is rightfully a treasured Kiwi keepsake. 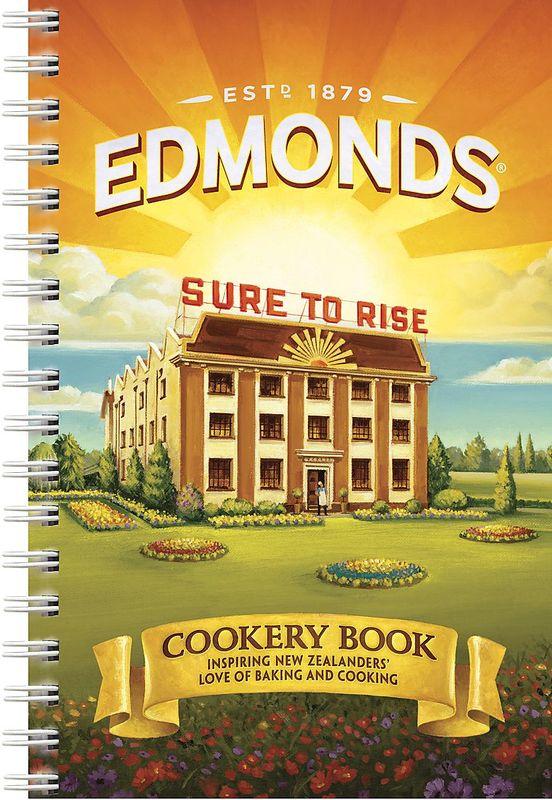 The Edmonds Cookbook is New Zealand’s answer to The Joy of Cooking. Thomas Edmonds published a recipe pamphlet in 1908 as a way to sell his baking powder. He watched the newspapers for engagement announcements and sent a copies to the brides-to-be. His enterprise paid off as his pamphlet grew into a cookbook that is still in print, with a copy in the kitchen of almost every Kiwi household.