Perhaps because we were country people, few things gave me such pleasure when I was growing up as driving the back roads of Grey and Dufferin Counties. It was rural Ontario at its best! All through my high school years, Mom and I would get into our 1959 Pontiac – a smart two-tone hardtop with windows that all rolled down, leaving a complete panorama of open space – and with the wind blowing through our hair, head out to explore. It was like an edible treasure hunt with no particular destination other than aiming north. We might get waylaid by a row of elderberries hanging seductively on the other side of a watery ditch, or a hedgerow of chokecherries that we’d pick quickly into the weathered wooden baskets thrown into the back seat, which were made by a cornerstone industry in our farming town of Mount Forest.

East of the community of Durham, the landscape changed. It was no longer rolling farm country. We’d top a huge hill and the Beaver Valley would spread out in a vista below us. The Beaver River poured through the valley’s folded expanse, tumbled over the waterfall at Eugenia, flowing through sleepy communities towards the deep waters of Georgian Bay, hiding in the mists just beyond the horizon. The Bruce, Owen Sound, Meaford, Thornbury, Clarksburg, Collingwood… we could hardly wait to get there. 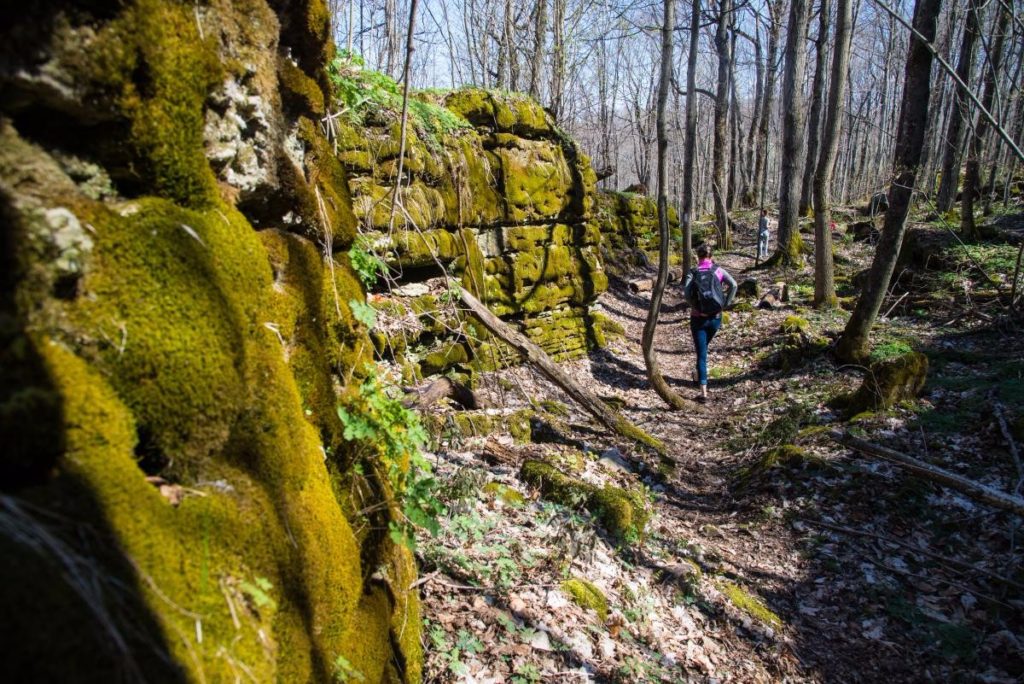 Today, 50 years later, the vista is the same but you can now also find one of the most exciting, and largely unknown, gastronomic regions in Canada. The shopping list of edibles – and drinkables – has exploded.

If you look at the Great Lakes from outer space, Lake Huron is the lady carrying a backpack… and it’s the culinary culture that rings that backpack we’re exploring here.

Georgian Bay, the ‘backpack’, is massive, covering some 15,000 square kilometres and embracing around 30,000 small rocky islands. The water is deep and cold — great for fishing and later in the summer, the best swimming anywhere in the nation. The rugged bedrock and white pine forests of the north give way to sandy southern beaches. Bruce Peninsula National Park on its western side includes part of the Bruce Trail, a 725-kilometre hiking trail that traces its route along the spine of the Niagara Escarpment, a UNESCO World Biosphere Reserve, from Niagara Falls to the very tip of ‘The Bruce’. Largely defined by the Niagara Escarpment with its rocky streams, artesian wells and pure water, the climate is tempered by the Bay. It is Ontario’s apple country, with thousands of acres of the fruit.

When I first started exploring the region, the best food was found in home kitchens. Nowadays, thanks largely to countless recreation opportunities and a host of artists and entrepreneurs, it has become a serious culinary destination, which has been chronicled in a recent book, Come to Our Table: South Georgian Bay Community Cookbook. Self-published by one of Canada’s finest food writers, Rheanna Kish, with business partners Heather Goldsworthy and Scott Gloster, who live smack dab in the middle of it all, the book brings an intimate knowledge of the region that no occasional travel writer could ever glean.

Get a map – yes, they still do exist – and join me exploring some of the highlights of the region. And if we whet your traveller’s appetite, check out this feisty group’s website and pick up your own copy.