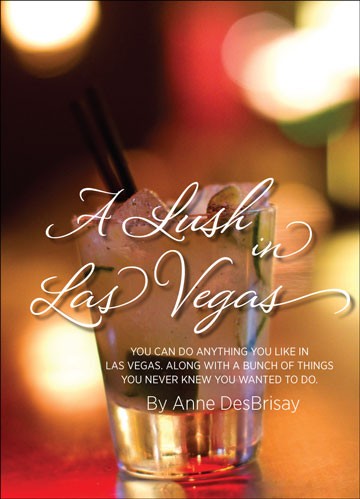 STAY INDOORS 24 HOURS A DAY placing bets on cards, watching wheels spin, feeding the slots if these are your pleasures. Venture beyond the games and visit a pyramid, a Sphinx, an Eiffel Tower, a New York skyline. Take in any number of circus-cirques, shows, concerts, extravaganzas, burlesques, stripteases, hypnotists, comedy clubs. Vegas boasts (constantly) the widest choice of celebrity headliners per square mile. Donny and Marie are in town, Rod Stewart is coming, Celine Dion may never leave. There are miles of shopping, seriously affordable all you can eat eateries and top dollar, triple-A-five-diamond dining rooms with star power chefs – some in charge, others simply lending a gilded name.

Sights and games aside, people watching may be Las Vegas’ single greatest renewable resource. In my four days on the Strip I witnessed a bride in full wedding garb, her bare shoulders draped with writhing pythons. I saw packs of staggering convention-going men…in togas. I noticed one woman seemingly cemented to her stool, at the same slot machine morning, noon, evening, night, late night, later night and early morning for the entire duration of my stay.

But none of this compares with the experience I was provided by a beautiful young woman, a Boston Shaker and a tiny yellow bud from the sunflower family. This was why I was in Nevada: an examination of a less heralded but still critical component of Sin City history, and a head-down study of its sybaritic possibilities. Think of the Rat Pack, of Caesars Palace, of almost any scene in any film ever made about Las Vegas and see what they have in common.

The cocktail films about Vegas are dripping with them. Martinis, Manhattans, Screwdrivers, Rusty Nails, Daiquiris, Caesars, The Cosmopolitan…some of them invented in this town (or so they claim).

I was in The Cosmopolitan Hotel. It was my Day One in Vegas. Mixologist Mariena Mercer was using tweezers to pull a Szechwan button from her impressive mise-en-place. “Some of you may find this uncomfortable,” she tells our little thirsty group, as she drapes the stem of the yellow bud over the cocktail she’s created. “But it really does add that little kick this drink needs to finish strong. It’s more than a flavour; it’s really a feeling.” She’s bestowed upon us a pretty grin with a devilish afterbite and one by one we give the bud a go. Nothing much at first. 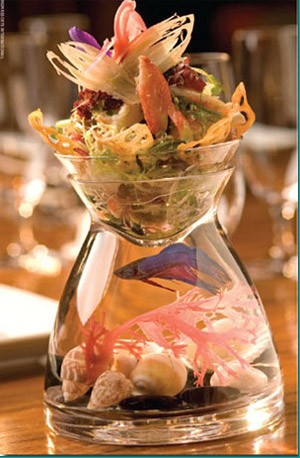 And then an overwhelming sensation of sourness, followed with a warming, peppery tingle on the tip of the tongue. And then… Whoa Nelly!… my mouth is buzzing like I’ve inhaled an angry wasp and I’m drooling like a Labrador retriever. Five minutes later I’m still tasting the battery-licking after-buzz. As per Mariena’s warning, it’s a bit unpleasant. And then gradually it’s less unpleasant, a lot less unpleasant, and then I’m casing the bar for another one of those buttons to bite.

Outside in the heat heavy air of Las Vegas, it is a little after ten o’clock in the morning. (That’s the official time. Inside in Las Vegas, time doesn’t register.) We are at the Chandelier Bar where Mariena Mercer is GM. Correction: we are in the bar, cocooned inside its three-level space, while surrounding us are the limbs of the chandelier itself, dripping with hundreds of thousands of shimmering crystals. Only my first stop on a forced march of cocktails across a city more famous for casinos.

In the vain bid to Out-Excessive the next guy, in a city built on the philosophy of ‘just-do-it’ (before a sneaker company made it a slogan), the Chandelier Bar is about as striking as it gets… with a bartender to match. An award-winning mixologist, Ms Mercer boasts a Chemistry degree, inch long lashes and a mesmeric blonde mane that tosses about her pretty head as she brandishes her Boston shaker. Passionate about flavour profiles – what goes with what and why – a devotee of the Food Network and The Flavor Bible, Mercer’s current enthusiasm is for Thai-inspired infusions, using Kaffir lime leaves, building syrups with Thai red chillies and lemongrass, juicing ginger root, marrying these with the right spirit, and not shy about finishing drinks with a bit of molecular mixology magic.

What had there been to drink in my little world before Vegas? Wine and water, coffee and tea. These daily libations were bolstered by the occasional wee dram by a winter fire. A G&T to welcome summer. A Bloody at brunch. A Kir Royale on Christmas. But cocktails? Not for me, thanks. Mixed drinks were unpredictable, reliant on the quality of the bar’s product line, the ‘tender’s whim and experience, and almost always disappointingly sweet. Not worth the effort, the cost, the sugar headache.

But I fell hard for cocktails in Vegas. I was handed drinks I will never forget. Some vibrated, some smoked, one had layers of flavour that yanked me back to childhood: pumpkin pie by the fire at gran’s. Mostly they had elegance, distinctive garnishes, a longer finish than I was accustomed to and mixed by men and women with obvious skill and infective enthusiasm.

“Always shake it hard, and always with a smile, I tell my guys,” says Eddie Perales, head of beverage operations at Caesars Palace, arm outstretched in my direction, a ‘Honey, I’m Off Sunday’ punch in hand. In the solid ice shooter he makes, his drink is essentially Jack Daniel’s ‘Tennessee Honey’ poured over a myriad of fresh juices and syrups infused with berries and mint and with a dollop of orange marmalade, a flourish of edible flowers.

“When my bartenders say to me: ‘look at this great cocktail I made,’ I say ‘Tell me for whom did you make it? What were their needs, what mood were you looking to create for them?'” Never underestimate the nostalgic quality of a drink, Eddie tells us, distributing flutes of his Mimosa, garnished with molecular ‘caviar’ spheres of cranberry and pumpkin. “We are here to surprise and delight, but also to honour memories. There are some cocktails on our menu that will never change. People come back every year for them.”

You find a bunch of those nostalgic drinks at the 18a Bar (named with a wink, I imagine, for the Eighteenth Amendment establishing Prohibition in the United States). The bar is the drinking side of The Cosmopolitan’s Comme Ca by David Myers, a French-style brasserie with an icy raw bar and a hot view of The Strip from its wrap-around balcony. We didn’t linger long with the updated Old Fashioned before moving right along to ‘The Hot Pepper Smash’ (Bourbon, Thai chillies, lemon, honey, mint, muddled, shaken, strained, topped). This kicky cocktail was quite possibly my favourite though it’s tricky to be definitive about that. My soggy notes with their wonky stars suggest I might have liked best the Scotch based ‘Penicillin’ with honey, fresh lemon and ginger juices, a candied ginger rim and a long smoky finish from a peaty spritz of Laphroaig.

“The whole point of Las Vegas,” says Lou Hirsch, effervescent GM of FIRST Food and Bar (inside The Shoppes at The Palazzo) as he delivers rainbow shots of vodka infused for 36 hours with Skittles (yes, Skittles)”… is that folk who come here want to act like they don’t at the office.” A bachelorette party at the next table tests his theory and suggests it bang on. The merry maids are guzzling rounds of ‘Cotton Candy Kisses,’ a pink martini splashed with elderflower liqueur, rimmed with crushed Lifesavers and finished with a fluff of fairground candyfloss. (The perfect drink for a toddler except all that candy can’t be good for them.) “Fun and sexy drinks that take people back to their childhood is what we’re creating here,” says Lou, as he hands over Pinnacle whipped cream flavoured vodka (who knew?) topped with retro root beer and plopped with brandied cherries.

For more grown up drinks we head to The Downtown Cocktail Room in the Arts District off Freemont Street, with its speakeasy door and hipster crowd. In this dark swank place I’m handed a cocktail that brings me to the Thanksgiving harvest table. Where’s the hearth, the Hudson’s Bay blanket, the Golden Retriever?

This merited more than a sip. This one I plumbed the depths, bobbing up to relish the spice rim, working out the layers of flavour. Their complexity was slippery work. Laird’s Apple Jack, this I knew. (I’d been told.) And figs. But was that also blood orange? Molasses? Cinnamon or nutm… or both? This brown potion was called ‘Don’t Fig With Me.’ It had none of the sugariness of much of what I’d consumed the day before. Sorry, the night before. Yesterday afternoon. I mean. In the name of research.

One more slug, just to be sure about the molass…

The following morning we get reacquainted with the medicinal qualities of the Bloody Mary. Hangovers are a cash crop in Las Vegas, every bar with its version of the reputed cure. We nursed ours from the Bloody Mary bar at Wynn, part of Society Café Encore’s magnificent brunch – buckwheat pancakes with pumpkin butter, whitefish salad, truffled mac and cheese, steamed buns filled with tuna tataki on wakame salad, a slice of Chef Kim Canteenwalla’s (a Montreal transplant) ’40 Pound Chocolate Layer Cake’. My father’s Bloodies – tomato juice, vodka, Worcestershire – these ain’t. Built with a foundation of home-spiced and spiked juices, some fortified with beef broth, and garnished with all manner of options – including crunchy Bayou-spiced shrimp, pepperettes, and Stilton stuffed olives – we say ‘Hail Mary’ and down two. And then we get the recipe so we are never high and dry without a solid hangover handler in our back pockets.

I brought the directions back with me and re-printed them here.