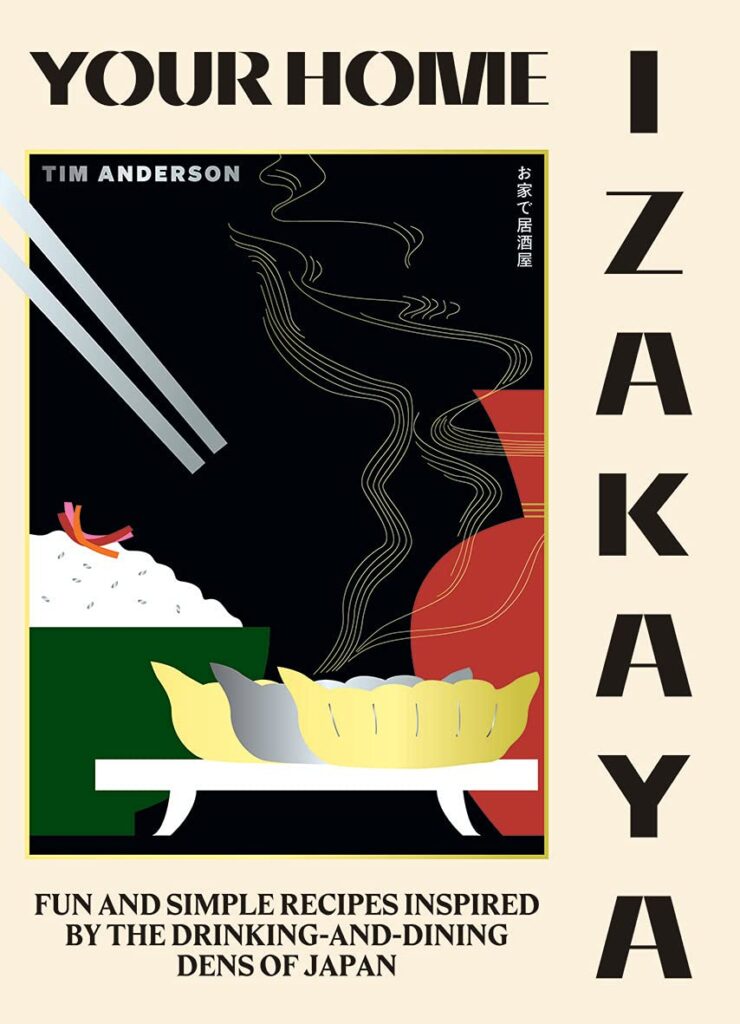 n Izakaya is an informal watering hole in Japan, where patrons go to drink and eat. It is akin to a British pub, or a Spanish tapas bar — a place to relax and unwind with friends or colleagues, with alcohol the primary social lubricant, and some tasty eats to balance the booze.

An American resident of Britain, Anderson describes himself as “a big dumb American with a big dumb American palate,” which is more than a little disingenuous as he is also a professional cook with two successful restaurants, a MasterChef gong, and three previous cookbooks under his belt. What he wants you to know is that his “Fun and Simple Recipes Inspired by the Drinking-and-Dining Dens of Japan” will have mainstream appeal. And they do. Meat, cheese and comforting carbs are as present as the fresh seafood and vegetables that we typically associate with Japanese cuisine. There are only two recipes for sushi – one a handroll made with fish sticks, and a single recipe for sashimi.

The book starts with nine short introductory essays that explain the Izakaya concept, the Japanese notions of hospitality and reciprocity, and identify some key techniques and ingredients used in the recipes. Anderson is aware that the audience for this book will for the most part reside outside Japan so most ingredients can be found on supermarket shelves, or can be easily ordered online.

The principal recipe chapters are labelled: LIGHT AND FRESH; BOLD AND BURLY; DIY DINING; SHIME: CARBS, CARBS, CARBS; SWEETS; DRINKS; FUNDAMENTALS. While many dishes fall into the category of small eats, many are substantial enough, with a bowl of rice on the side, to constitute a meal. Anderson provides a helpful footnote to each recipe suggesting additions to make a meal for two, with drink pairings, both alcoholic and non.

I lived in Tokyo for a few years and was fortunate to have cooking lessons with Elizabeth Andoh, one of the foremost Western authorities on Japanese cuisine, so I felt very much at ease cooking from this book. But no specialist knowledge or experience is needed. Anderson provides extensive headnotes and sidebars and writes with clarity and a relaxed authority that inspires confidence. Japanese culture is unique and difficult to describe to someone who hasn’t experienced it. There are many social formalities and behavioural norms that influence every aspect of daily life, including interactions that involve food and drink. Anderson does a very credible job of placing his recipes within a cultural context that may be unfamiliar to many readers.

LIGHT AND FRESH contains recipes for salads and cold dishes, many but not all vegetable-based. I chose Tomatoes Marinated in Ginger Tsuyu and Lightly Pickled Cucumbers with Garlic and Sesame Oil, two cold nibbles that each packed a pleasing wallop of flavour. The tomatoes are blanched, peeled and left to sit in a dashi-and-ginger marinade. Served chilled, they’re zippy, zingy and sweet. The cukes were so delicious freshly made that it was hard to allow them the four hours marinating time called for. I’m not keen on raw garlic so I reduced the two cloves called for to one and the pickle still had a garlicky bite. Vampires beware!

During the hot summer months in Tokyo, hiyayakko was one of my favourite dishes. It’s a cold block of silken tofu topped with a flavour bomb of garnishes – bonito flakes, ginger, ponzu sauce and green onions. The classic recipe is the only one I know so I was intrigued by Anderson’s riff, which replaces the usual garnishes with an egg yolk that’s lightly cured in chili oil, soy sauce, mirin and vinegar. It’s a much richer dish, the golden egg combining with the other ingredients to create an unctuous and spicy sauce for the tofu. The presentation is gorgeous too – you scoop a hollow in the tofu to cradle the egg yolk and pour the crimson sauce on top. Garnished with a scattering of scallion greens, it’s a show stopper.

Anderson includes quite a number of “fusion” dishes that introduce western elements to Japanese dishes.  This is not out of place – Japan was closed off to the rest of the world for much of its history, (which explains in part the development of its unique and highly refined culture and art forms) but when the nation opened its doors to foreign influence after the second world war, the Japanese showed themselves to be masters of adaptation. New ideas and technologies were embraced, and with Japanese skill for refinement, often developed or improved upon. A number of Japan’s most popular dishes are fusions – curry rice (which has an Indian-esque sauce), katsu (breaded pork schnitzels) and tempura (a deep frying technique purportedly brought by the Portuguese) – to name a few.

From BOLD AND BURLY, Pepper Steak with Garlic Soy Sauce Butter is a simple treatment for steak that so amplifies the natural umami of beef that served over rice a small steak can be stretched to feed two or even three. From this chapter I also enjoyed Stir-Fried Cabbage and Bacon in Curry Butter Sauce and Furikake Potatoes. The latter are par-boiled, flattened, then shallow fried and tossed with butter and furikake seasoning, which contains nori, toasted sesame seeds and the pepper blend called togarashi.

From DIY DINING (which refers to dishes, like shabu shabu and fondue, that are eaten from a shared pan) Cheese Dakgalbi delivered a skillet of chicken and vegetables (sweet potato, cabbage, onion and carrot) cooked in a flavourful marinade, with a puddle of melted cheese in the centre of the pan serving as a dipping sauce. It was very delicious but I thought the cheese was unnecessary. No doubt I’d feel differently if I’d been drinking!

SHIME are substantial dishes that can constitute a meal in themselves. I chose Fried Rice with Crispy Bits (achieved by letting the rice cook undisturbed until some bits get golden and crunchy) topped with shrimp. Any protein could replace the shrimp, or you could omit it altogether as the rice is substantial enough on its own.

Desserts don’t play a major role in Japanese cuisine but Andersons SWEETS chapter contains a handful of recipes including the delicious and extremely simple No-churn Banana, Brown Sugar and Miso Sorbet. His DRINKS chapter helps de-mystify sake and other Japanese beverages, including teas, and gives recipes for a few innovative cocktails. FUNDAMENTALS contains recipes for making some store-bought commercial dressings and condiments from scratch, and a method for cooking a Ramen Egg that turned out perfectly.

There are some excellent cookbooks that explore the classic principles of Japanese cuisine, but Your Home Izakaya doesn’t claim authenticity. Anderson developed this book while in pandemic lockdown, describing the extra time gained to cook at home rather than for paying customers as “an almost unconditional joy.” His pleasure in this type of casual cooking and entertaining translates into a collection of easily achievable recipes with enough variety to please all palates, and all delivering a bold and punchy blast of flavour. Itadakimasu!

The Atlas Cookbook
Eat Your Veggies: A culinary exploration of vegetarian cookbooks
Yucatán: Recipes from a culinary expedition