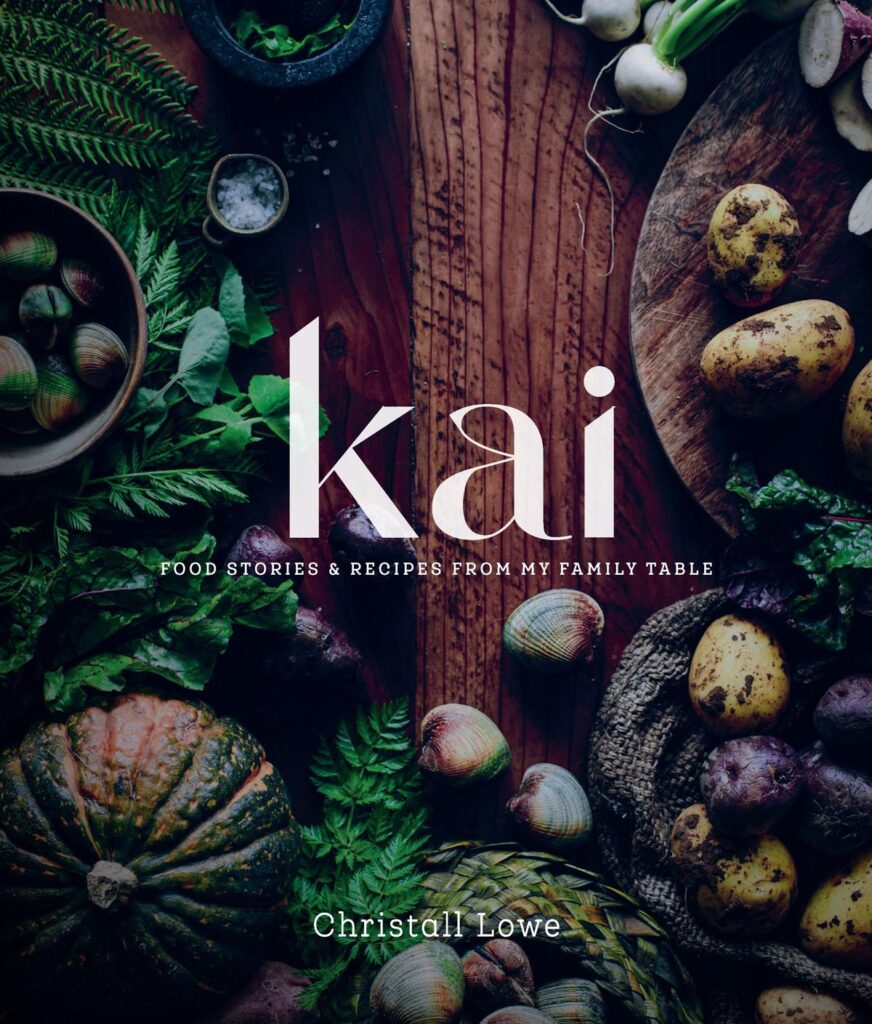 Christall Lowe is a professional recipe developer, food stylist and photographer. She is also the mother of three and of Māori descent on both sides of her family. Kai is her first cookbook.

As you’d expect from an award-winning food photographer, it is a gorgeous book to look at. Moody food shots and images of New Zealand’s famously stunning landscape paint a picture of a bucolic lifestyle, blessed with the bounty of land and sea and the company of extended family.

It’s a romanticized view of the way in which many Māori families live. Lowe has the good fortune to reside in a scenic region of the North Island, in a town repeatedly named New Zealand’s most beautiful. The majority of New Zealand’s indigenous people, dispossessed of their lands and heritage by colonialization, still exist in the lower socioeconomic levels of society and live in less privileged urban environments.

But there has been a resurgence of interest in Māori culture in recent years along with official recognition of indigenous rights. Te Reo Māori is the second official language in New Zealand and many Māori words have crossed over to the vernacular English spoken by New Zealanders. One word every Kiwi knows is kai – food.

Before choosing Lowe’s book to review, I picked up a copy of Hia Kai by Monique Fiso, another recently published book exploring Māori culinary culture. Fiso is one of New Zealand’s most acclaimed chefs and has worked in Michelin-star restaurants around the world. Her restaurant in Wellington was named one of TIME Magazine’s 100 Greatest Places of 2019. Fiso takes a deep dive into indigenous ingredients and cooking methods, reinterpreting them with a modernist culinary sensibility. Hia Kai is a beautiful and inspiring book – but not one that would get regular use in most home kitchens.

Lowe’s book on the other hand is about family meals and is filled with recipes written for the home cook. With the exception of a couple that required deep-frying (not my favourite kitchen task) there wasn’t one I didn’t want to try.

Nine chapters are arranged according to dish type, and there’s also an introduction, a section of kitchen notes, and a glossary of Māori terms. Principle among these in the context of this book (after kai of course) is whānau, meaning family, extended family, or family group. Lowe’s book is dedicated to her late brother and grandmother and the tone throughout is one of celebrating family heritage and the act of feeding the people you love. “Nana” is the source of many recipes in the book that until Lowe decided to record them had never been written down. And unlike Fiso’s recipes, they don’t involve sophisticated techniques or hard-to-find ingredients.

Lowe strives to feed her family nourishing meals based on fresh healthy, ingredients but nothing is off limits. Cream, butter, sugar and other rich ingredients are used in moderation, well balanced by an abundance of vegetables, grains and seafood. The family stories woven throughout the text fall naturally into place and give the recipes a genuinely heartfelt context.

First up in my kitchen, from the chapter huawhenua (fruit of the land) Kamokamo Fritters, zucchini standing in for the native squash grown in Lowe’s granddad’s patch. Topped with sour cream, they made a light but satisfying lunch. From the same chapter, I made Honey-Roasted Yams with Feta Whip. The yams are the little knobby kind, not always easy to find, so I used one of the suggested alternatives – parsnips. Roasted to sticky tenderness and topped with a cool, salty feta cream, the humble root enjoys a diva moment.

From the chapter kaimoana (from the sea) Chilli Coconut Mussels were simple to prepare — poached in a fragrant wine and citrus broth enriched with coconut milk. Yum. Smoked Fish Bites – crispy little nuggets with a creamy filling (that can also be served as dip) were a delight. Raw Fish, a ceviche in the style of Tahitian poisson cru was a stunner.

Hapa (mains) includes Boil-Up, a one pot meal of vegetables and meaty bones with doughboys (dumplings) that Lowe describes as “the staple of staples” in many Māori households. There’s also a modified-for-the-oven version of hāngi, the pit-cooked meal of meat, vegetables and stuffing that is a hallmark of Māori cuisine. I made the elegantly simple but very tasty Koro Chee Sticky Pork, a recipe handed down through Lowe’s family from a Chinese ancestor. I bookmarked Creamy Lemon Chicken for a later go-round.

There is a chapter devoted to reka kai (cold desserts) and another to purine mahana (warm puddings).The latter includes, among other temptations, a gorgeous plum and apple pie, an old fashioned burnt sugar steamed pudding, and Kūmara Cake with Orange Toffee Sauce.

I finished up with Chocolate Chip Almond Cookies from hua parāoa (baking & sweet treats). These were chewy, not too sweet and as promised “seriously good.” There’s also a yoghurt cake drenched in grapefruit syrup in this chapter that I can’t wait to try.

Overall, Lowe impresses with well tested and clearly written recipes that deliver accurate results. But Kai is more than just a collection of dishes for the home cook, it is a beautiful work of photojournalism that invites readers to share in the rituals and spiritual connections with food that lie at the heart of Māori family life and culture. One to both learn from and eat from with pleasure.