After many years of buzz-wordy food trends, a celebrity chef explosion and flashy high-concept restaurants, Los Angeles restaurant goers wanted a new dining experience to chase after…and they got their wish in 2008. That year, pioneering “trucker” and culinary wunderkind Roy Choi made a splash with his Korean-Mexican hybrid tacos — so much so that a Kogi pop- up made a brief appearance in LAX’s Terminal 4 in 2015. In short order, the trucks and their delicious cargo — thanks to the rising influence of social media and a promising app called “Twitter” a decade before influencers roamed the Earth — attracted the kinds of lines associated with major rock festivals and Broadway shows.

Mobile restaurants, however, were hardly new. A fleet of neighbourhood taco trucks had served work sites and working class L.A. residential areas for years. Some of those trucks cultivated a loyal following of Mexican food enthusiasts who searched high and low for Mexican food true to its origins. As “authentic” and “traditional” became buzzwords in the food media, the trucks’ popularity lay in their “best kept secret” status. It was all about word of mouth… especially if the food tasted as good or better than similar fare high-end restaurants were offering. 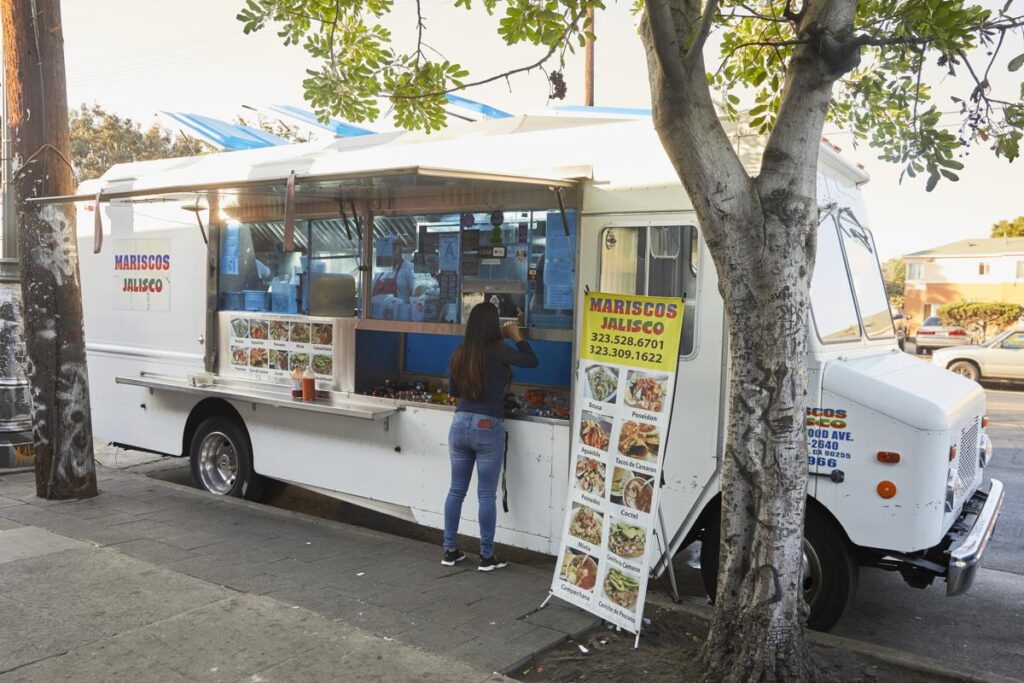 “Food trucks have been part of the landscape of L.A. and other cities, but until about 2008 they had a very specific place in the city’s history,” says Michele Grant, one of the original founders of The Grilled Cheese Truck and a first-hand witness to the birth and growth of the phenomenon.

“Known as carros loncheros, they mostly catered to workers and sold Mexican and Latin American food, travelling to different work and construction sites,” Grant continues. “An attorney friend of mine, Erin Glenn, represented them as a leader of the Asociación de Loncheros L.A. Familia Unida de California. She fought for the city’s catering and food truck operators, who were dealing with a confusing myriad of licensing and zoning regulations and the police giving them a hard time.” 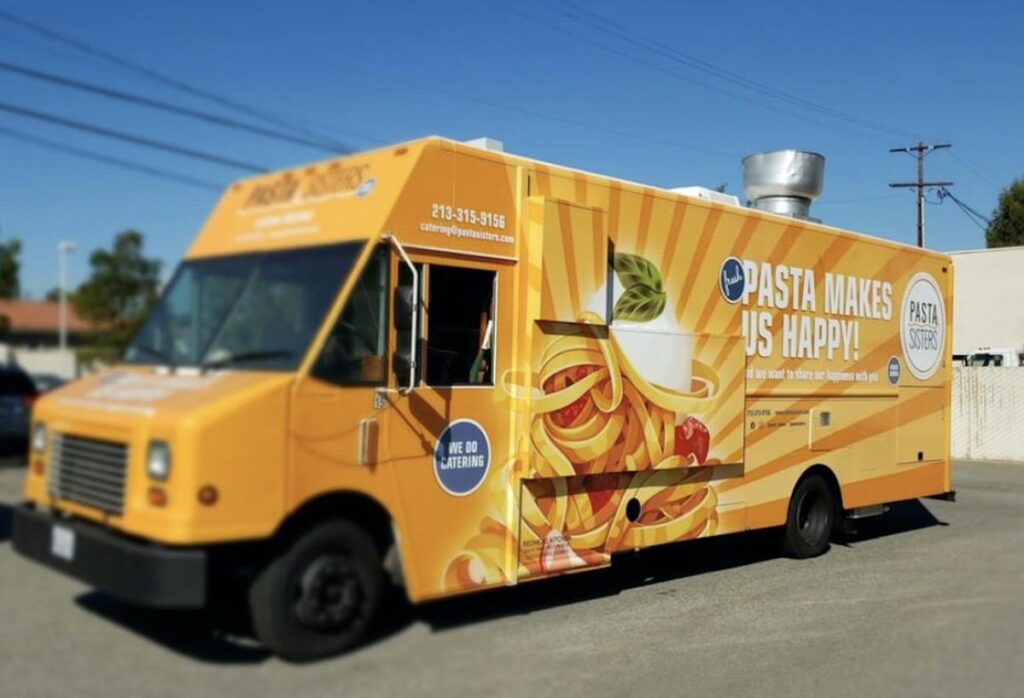 Grant notes it is ironic that while the food truck universe today embodies Los Angeles’  embrace of multiculturalism, opposition to the food truck in the early years related to stigma tied to anti-immigrant sentiment and socioeconomic stereotypes. Even with Kogi’s popularity growing, trucks were being chased away by police. Social media and the young savvy people using it proved to be the movement’s salvation. It also did not hurt that Kogi’s founders had a distinctive logo and bright colours on the trucks that made them easily identifiable and smart phone camera-ready.

It wasn’t long before all kinds of food purveyors jumped on the bandwagon, from established chefs and restauranteurs to “Top Chef” contestants and decades-old mom-and-pop restaurants representing every kind of ethnic cuisine found in L.A. In addition to popular standbys like tacos, burgers and hot dogs, hungry food hunters could mix things up with a variety of playfully painted and logoed trucks offering both traditional and reinvented versions of bites from around the globe, including Vietnamese banh mi, Japanese ramen, Indian dosas, German currywurst, Salvadoran pupusas, pasta of every description, regular and dairy-free exotic ice creams, gourmet donuts, Southern barbeque and, of course, the tacos and burritos loved by generations of Angelinos. 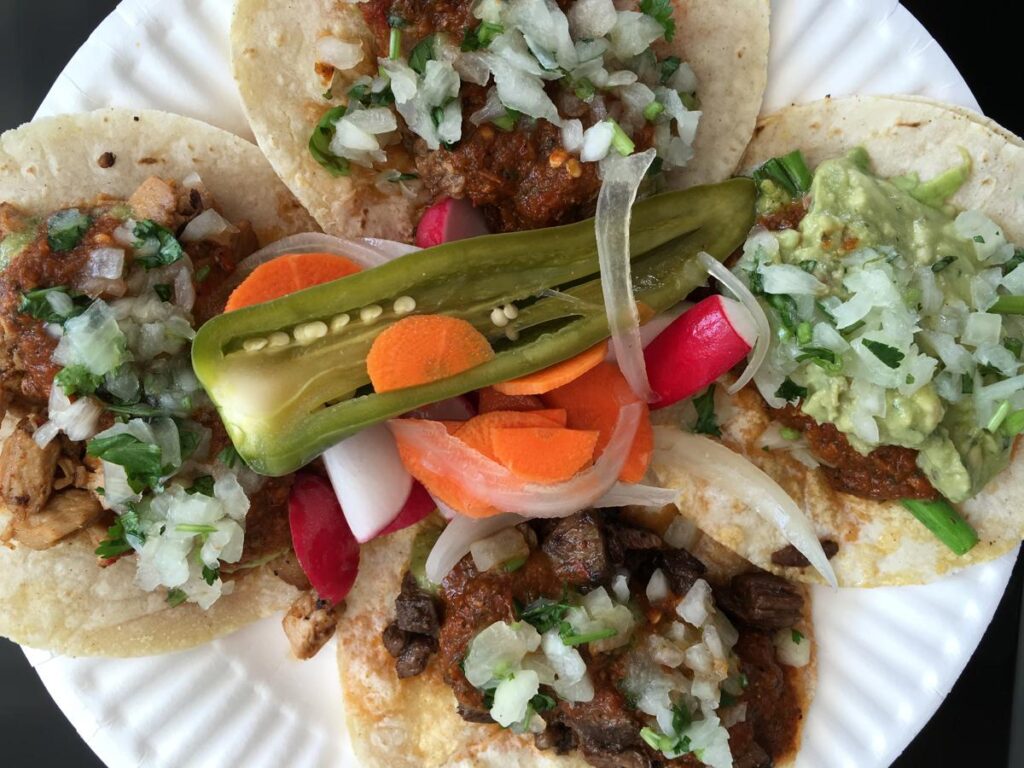 “Kogi set the benchmark for everybody who came after them, in terms of graphic wraps that helped set one truck apart from the other, making them recognizable enough to develop a following,” Grant says. “By the time my former partner and I started The Grilled Cheese Truck in 2009, there were already 28 different trucks on the road. Several of them with flexible business models to fall in line with the changes (including those brought about by covid-19), are still thriving today.”

Grant (who worked on film productions, and later became a freelance private chef serving clients with special dietary needs) and her partner determined that a grilled cheese truck made sense since no other trucks they knew about offered it. Furthermore, it was something that could easily be adapted for vegetarian customers. The enterprise came together in a six-week whirlwind. On the eve of their opening in October 2009, they were registering the truck, creating the logo and setting up accounts and presences on Twitter and Facebook. They also had to work out the menu, which needed healthy options so Grant could hold up her reputation as a “healthy chef” and offer vegetarian sandwiches that omnivores would also want to eat. 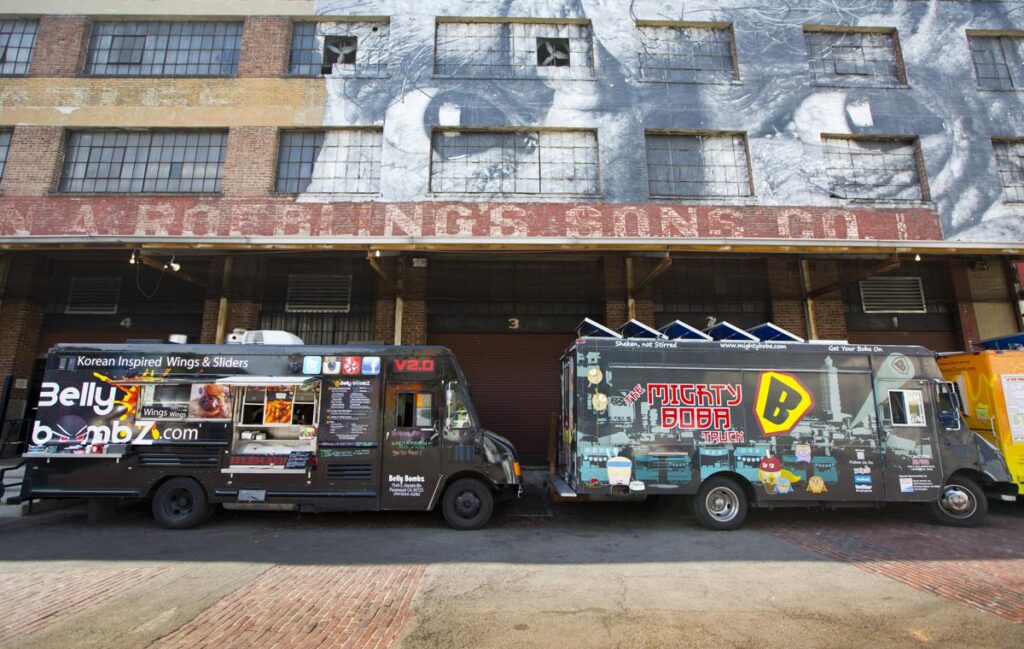 “On the first night, we had over 300 people standing in line waiting for sandwiches,” Grant recalls. “And, of course, something will go wrong on the first night, and for us, it was our griddle not working. However, we got it repaired and everything worked out… and we just kept going. By that time, we had 2,700 people following us on Twitter and 1,000 people following us on Facebook. Without formal advertising or PR agency involvement, we landed print media coverage and television appearances on the Food Network, Cooking Channel and Travel Channel. We were a true destination for locals and visitors to Los Angeles who searched us out. Even though some argued it was crazy to wait 45 minutes for a sandwich, meeting new people while waiting in line was part of the fun. There was a couple who met in line, and others who came down from San Jose, San Francisco and the rest of the country to see us.”

Strategies leading to The Grilled Cheese Truck’s early success included pairing up with a dessert-focused truck, and participating in larger events where people in a group would split up and wait in different lines to make their wait go a little faster. Through the course of the next decade, food trucks became an integral part of L.A. destination events such as art gallery open houses, outdoor film screenings and music festivals. The vibrant trucks also helped democratize high-end food and wine festivals, and later, paved the way for festivals and events dedicated to the food truck. These include the 626 Night Market (a rolicking mash-up of big city night markets like those taking place across Asia) and the Vegan Street Fair in North Hollywood. Local craft breweries and bars still regularly team up with the trucks to provide sustenance for their customers. 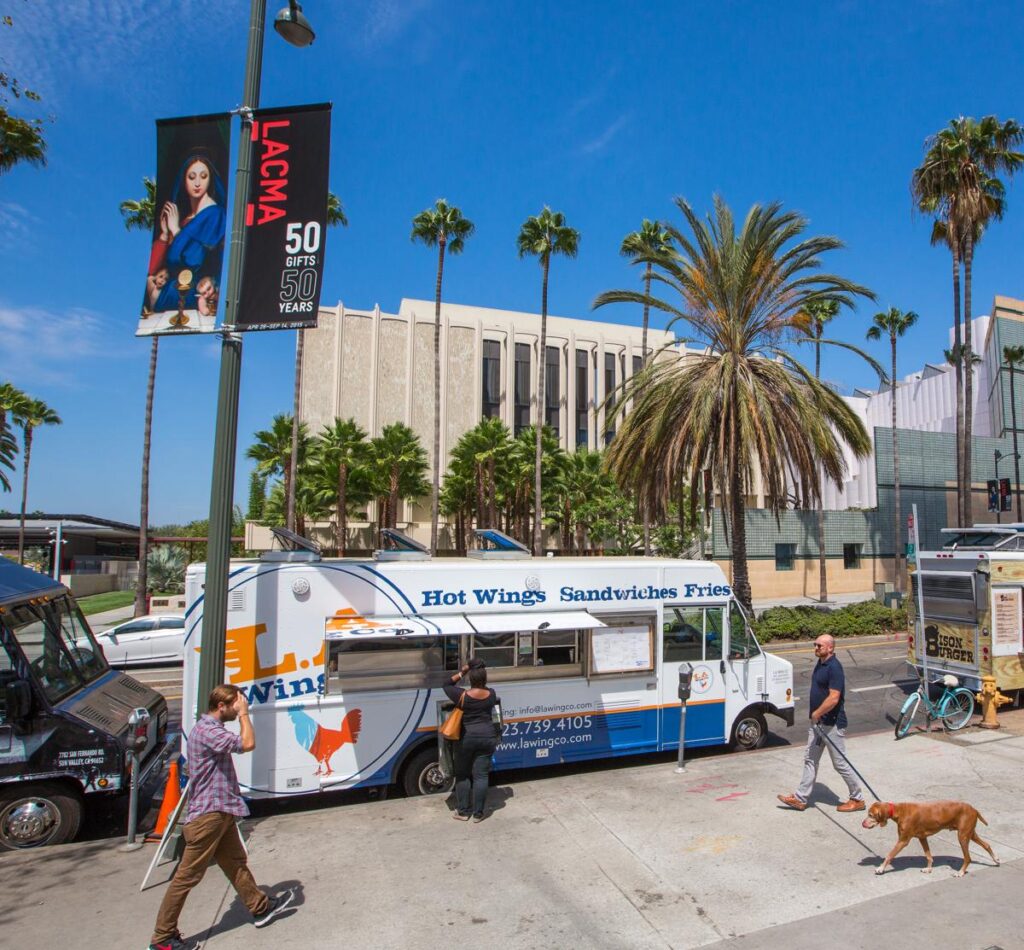 Chris Urakami, founder of the Poutine Brothers truck with brother Matt, points out that in contrast to many popular trucks offering fusion fare or the familiar tacos, dogs and burgers, they offered a niche dish that provided curious locals a fun comfort food alternative and Canadian L.A. residents a taste of home.

“There isn’t very much poutine to be had out here,” quips Chris, who had two trucks circulating around L.A. and Orange County by the end of 2018. “When we saw poutine on restaurant menus, it was usually a one-off special or a fancy variation with all kinds of specialty ingredients but not the gravy, cheese curds and fries marriage found in authentic Canadian recipes. Because of that, we felt there was an opportunity, especially with Canadians living in the Hollywood Hills and the South Bay beach cities, where many members of the L.A. Kings hockey team live and practice. We do good business on all the Canadian holidays, and continue to get support from Canadian groups spread out through L.A. and Orange County through their presence on Facebook and various other social media platforms. In the coming year, we look forward to working with the Canadian Consulate to get word out.”

In addition to the proudly Canadian fan base, Chris says the trucks’ biggest followings are in Burbank and Culver City, which are extremely centralized and accessible from Downtown, West Los Angeles and Hollywood. 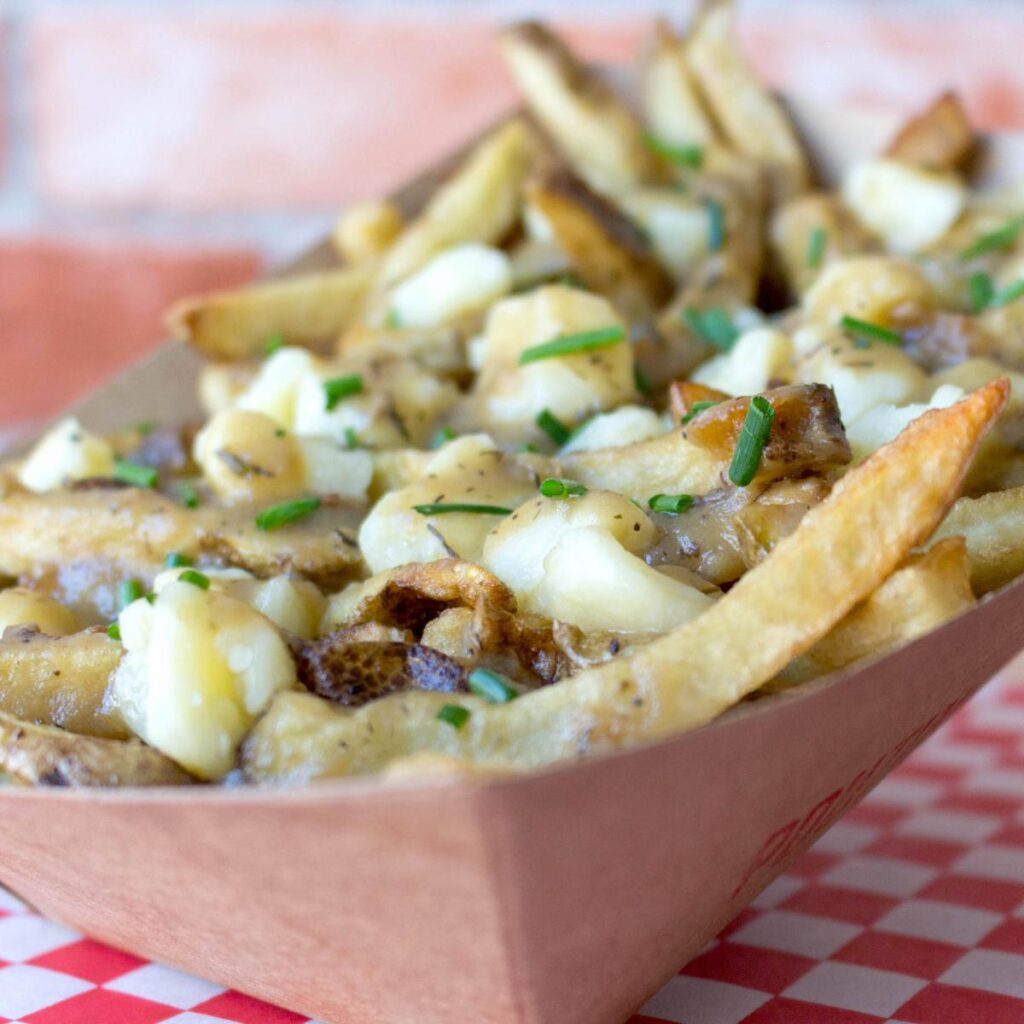 Originally, Chris and Matt hoped the Poutine Brothers trucks would gain momentum from planned appearances at major music festivals like Coachella and Stagecoach in 2020. However, as the pandemic prompted the cancellation of all large public events, the brothers shifted gears even while keeping their two food trucks running. They moved their “headquarters” into a shared kitchen and opened a brick-and-mortar location in Culver City, and formed an alliance with gourmet food marketplace Goldbelly.com to provide poutine lovers and curious eaters in L.A. and nationwide a variety of poutine “kits” shipped to one’s door allowing customers to prep the comfort food at home and enjoy it piping hot. This will enable their wheels to keep turning financially, so to speak, until the situation changes.

If you are visiting Los Angeles and chomping at the bit to eat like a local, scouting out a few food trucks through sites and social media may be the perfect way to do it. Not only can you safely “travel the globe” with a uniquely L.A. perspective, but also do it alongside residents who have come to swear by their favourites. 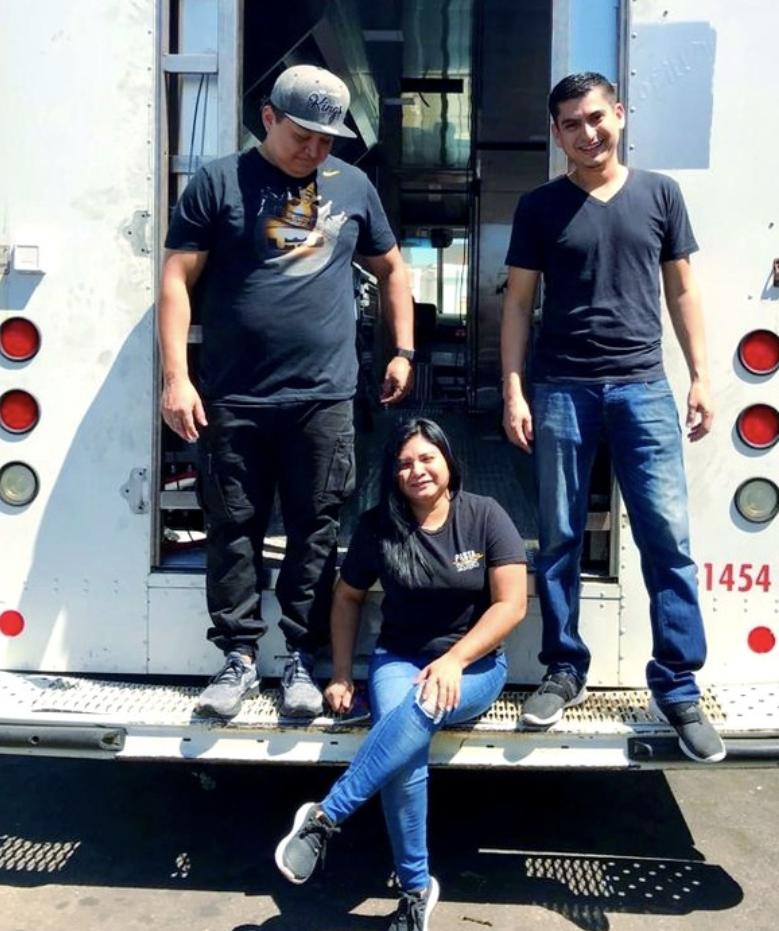